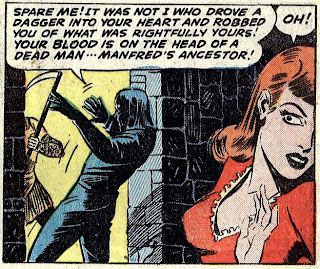 
In preparation for this post I read the short novel, The Castle of Otranto, by Horace Walpole, first published in 1768. The things I do for you readers! The suffering I do...egad. I fall to my knees and weep for my personal sacrifices.

Anyway, this 7-page adaptation of the famous "first" Gothic novel is from Adventures Into the Unknown #1, from 1948. The script was written by Frank Belknap Long, known amongst us cognoscenti for his contributions to Weird Tales and his friendship with H. P. Lovecraft. Long wrote the first two issues of AITU, but I don't know what else he wrote for the comics. If he was like some other writers, he wrote for the comics in a sub-rosa fashion, without announcing it as such.

According to the Grand Comics Database it's drawn by Al Ulmer. 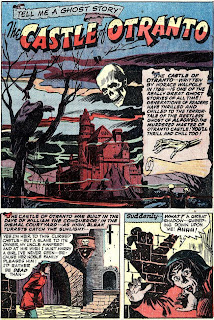 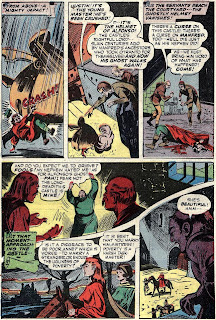 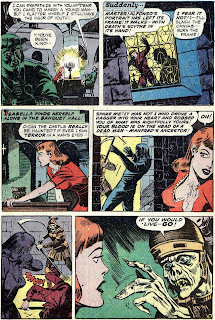 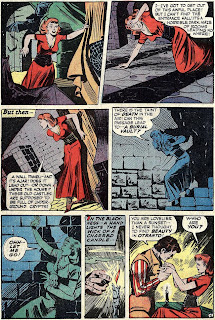 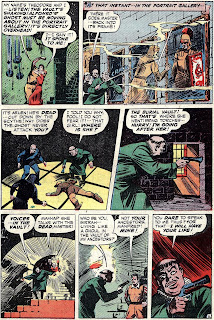 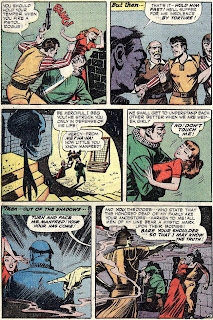 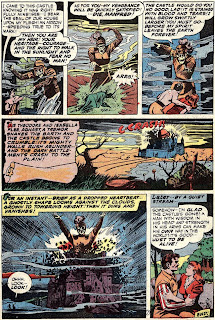 Not bad, but it reads like a 200 page novel condensed to seven pages...kind of uneven and stilted. Kind of odd, but I like the way the artist drew the 'mistress', and the panel at the end where the giant ghost is bursting through the crumbling castle.

Betty Comden and Adolph Green, Broadway writers, did a song, circa 1960, about Reader's Digest versions of novels. The verse I remember is about Gone With the Wind:

"Scarlett O'Hara's a spoiled pet,
She wants everything that she can get,
The one thing she can't get is Rhett,
The End."

That's how I feel about this short-short version of The Castle of Otranto.

Maybe if Classics Illustrated had stayed in business long enough a more detailed adaptation could have been done. It isn't a long novel.

That's really wild, Pappy. Wonder if anyone ever did Mysteries of Udolpho or The Monk in comic form? Classic Gothic Comics.

I haven't yet read the novel myself, but according to Wikipedia the student's friend, there are some differences... is the bit with the ghost and the painting from GHOSTBUSTERS II? Okay, DORIAN GRAY. Oh Basingstoke - RUDDIGORE.

Or is it the point of the exercise here to appreciate the novelties of interpretation?

"A Guided Tour of the Castle of Otranto

"With echoing dungeons, sighing ghosts, terrified virgins and a giant helmet falling from the sky, Rory McGrath guides us round [the] first gothic castle in English fiction."

Though I did not care much for this "adaptation" of the novel, I have to wonder if there is any way it could have been done any better in a mere 7 pages.

Vastly different from the novel, actually. But agreed, with seven pages characters and important references need to be cut. They really could've built a more appropriate final frame, though.

The Castle of Otranto at Casual Debris