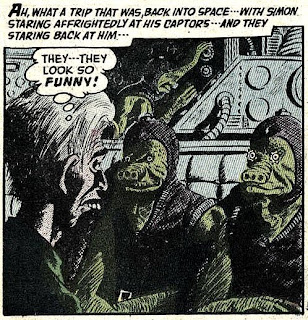 Number 691
Pre-Code/Post-Code
This is the final installment from Pappy's Science Fiction theme week.
The Comics Code was implemented in early 1955. By late 1954 some of the publishers of the period, like ACG and Atlas, seemed to be anticipating the Code by toning down their comics. The last pre-Code issue of ACG's Adventures Into the Unknown, #61, dated January-February 1955, dropped the horror themes that had carried it since the late 40s.
The lead story, "The World That Was," is drawn by Kenneth Landau. It was reprinted, as a Code-approved story, in 1960 in Forbidden Worlds #86 as "Interplanetary Episode." What struck me in comparing the two is that the original pre-Code version looks cleaned up...like they replaced parts of the story with more innocuous material, then put the worse stuff back in when they reprinted it under the Code. Yep, it's confusing all right, and seems to fly in the face of the evidence of other comics reprinting pre-Code stories much cleaned up by the Comics Code.
[SPOILER ALERT!] The story, in its second version, while more pathetic, brings more sense to the ending. Blowing up the world because Simon was accused of stealing a wallet seems mild compared to the reaction from the town when he was starving or his dog was killed. It's also not a story written by editor Richard E. Hughes. It wasn't his style to end a story in such a negative fashion. It's a head-scratcher why this particular story, of all the hundreds of ACG's stories published, was chosen to be reprinted. 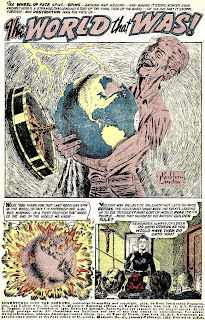 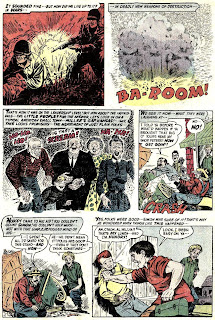 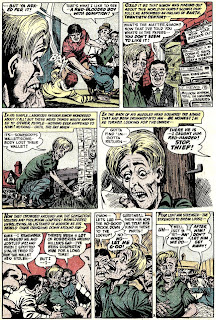 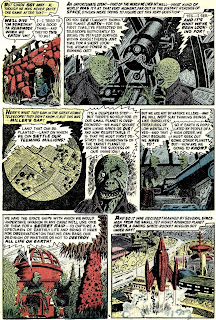 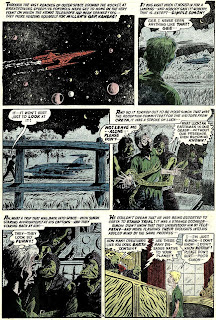 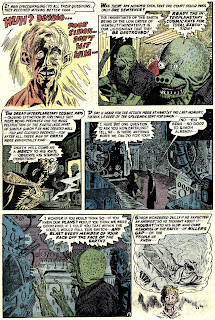 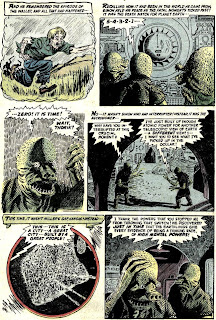 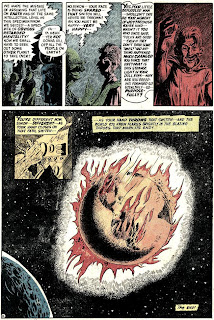 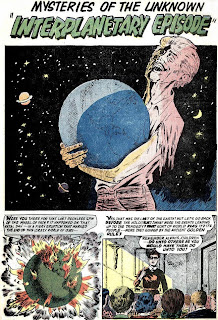 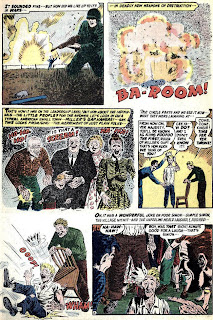 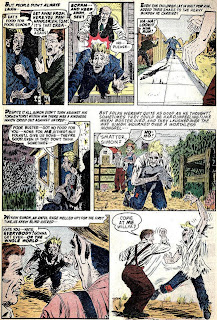 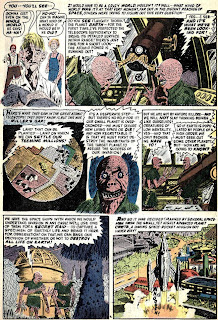 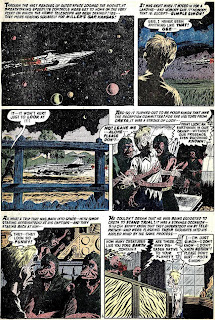 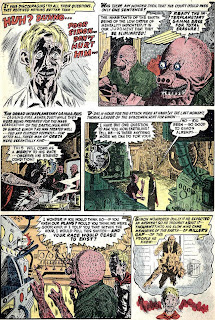 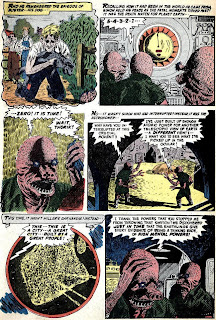 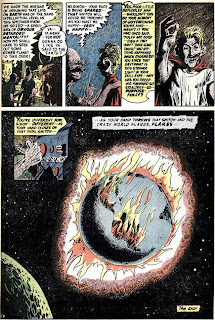 Interesting. The version printed post-code is definitely better, but each version has its peculiar virtues; and, for the times in which they were printed, these are remarkable tellings of a story. Either, with the incredible boil-over of rage, would have really stayed with me had I read it as a child.

I like your term, "boil-over of rage," which I've felt a few times.

Good thing I didn't have access to that lever that Simon pulled.

Awesome post. Pappy!
Fascinating and unexplained!
I enjoy Landaus art, his creatures are fugly and cool!

Hm. I disagree with eoconomist completely, finding the post-code version here to be completely inferior. Never minding the inept and imprecise recoloring, I thought that the new panels over-sentimentalized the beginning and telegraphed the ending. Well, to a greater degree than the first version, anyway.

Thanks for the comparison, Pappy.