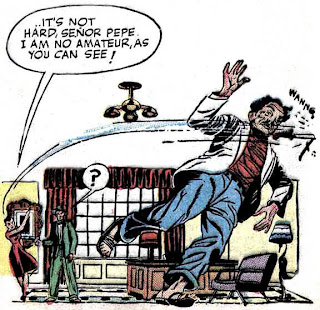 
This is such a pretty comic strip! Jerry Grandenetti, who was an assistant to Will Eisner, did an excellent art job on this episode of Señorita Rio. The sexy spy had a distinguished career as a lead in Fight Comics for a few years until displaced by Tiger Girl. Her adventures were drawn by top artists like Nick Viscardi (later known as Nick Cardy), Lily Renée, and Jack Kamen (if my art-spotting skills are correct with what copies of Fight Comics I've seen). 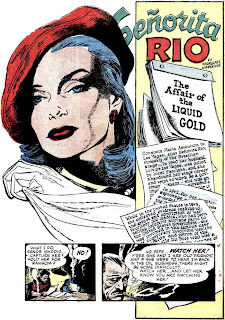 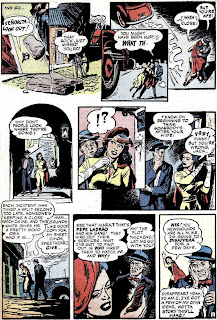 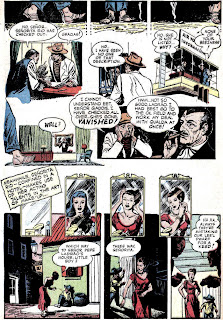 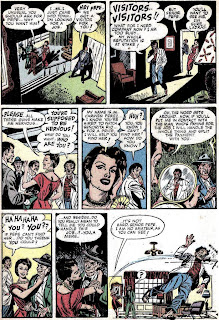 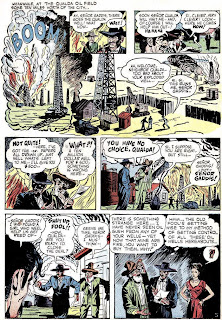 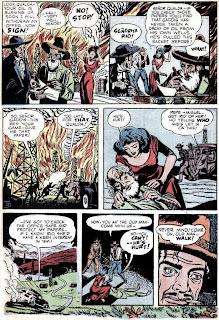 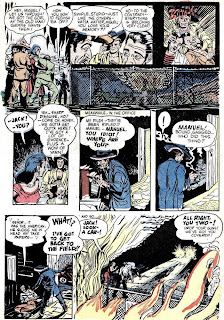 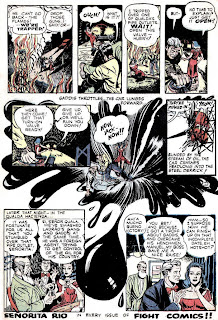 Other artists may have been more accomplished, but Renée lavished a great deal attention on the Senorita character, right down to the selection of wardrobe.

And Renée would find inventive ways to work the Rio's name into the splash panel art.

I really loved seeing this story Pappy, no matter who drew it.

Pappy. Your introductory sentence says it. Grandenetti's work here is very pretty. What a great story into the bargain. Grandenetti is an artist whose work I have only come across recently in some war comics. His pages always makes me do a double take and say "Oh, my!"

Thanks for a great post. Man, I could gaze at that last page for another 15 minutes, easy. In fact, I think I will. -- Mykal

I was going to make the same point as Senhor Soubaim, above, about the lack of any Portuguese here--beyond the odd surname (and also about the very fifties and cringeworthy Mexican patios). I don't expect too much worldliness out of these things, but all those tildes were pretty disappointing.

The art, on the other hand, was indeed awesome.

American comic books have always been Americentric (probably not a word, but the best I could come up with on short notice). Writers, especially in the 1940s, didn't go to any trouble researching customs of other countries, not for the $6.00 a page they were paid to write the stuff.

My sole reason for showing this story is that it was drawn by Jerry Grandenetti. I don't want to be starting any Brazilian-American war.

Always nice to see Jerry's great work. His Dr. Drew stuff is fairly well known, but no so much this feature. Nice to see a fellow Italian American get a showcase for his remarkable talents.