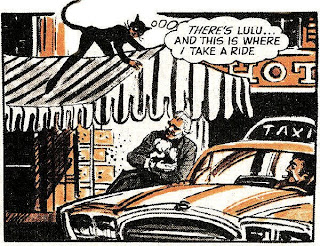 
Mrs. Pappy, whose name is Sally, went on a collecting binge a few years ago, finding and buying anything with the name Sally on it. Among the other stuff she found she bought a 1975 Sally Annual from the UK. She liked the cover, but she opened it, saw comics, and closed it right back up. I've told you before about the balance in the Pappy marriage. I love comics, she hates them.

I took a look and found this cute 4-page duotone strip featuring Cat Girl, who is Cathy, a prepubescent girl with a cat suit that gives her the agility of a cat. The story is as fluffy as my own cat; it's also unsigned, as is everything else in the Sally Annual. But it gives me an excuse to show you some other stuff about Catwoman, who we all know. These are panels from Batman #35, by Bob Kane. 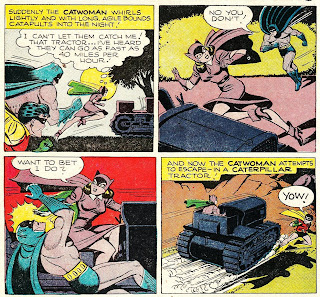 Here's a babe in a Halloween costume who could trick or treat at my house:

Here's a photo called "catsuits" my son sent me last year. He knows what his Pappy likes: 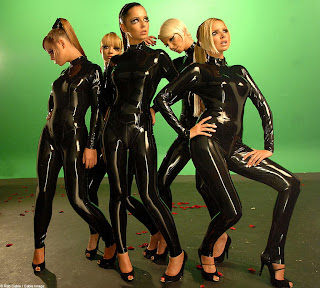 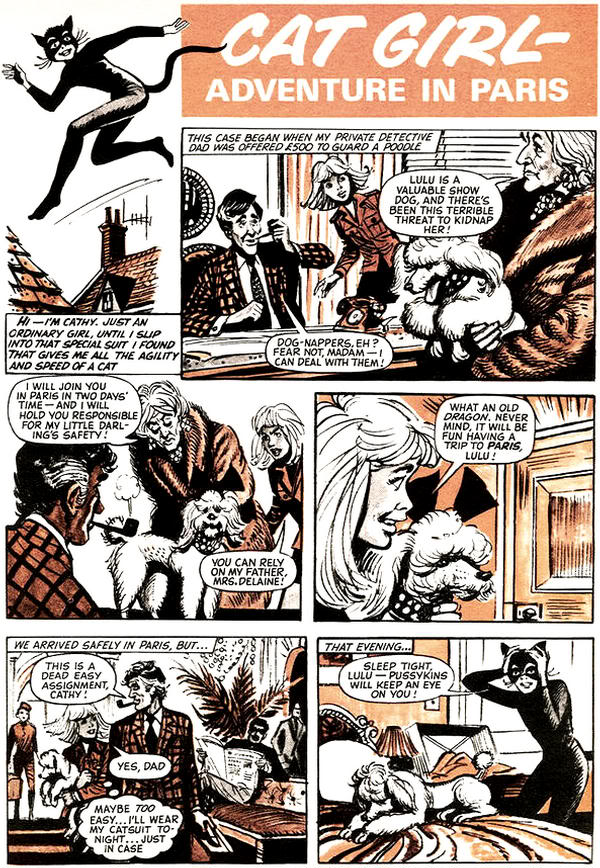 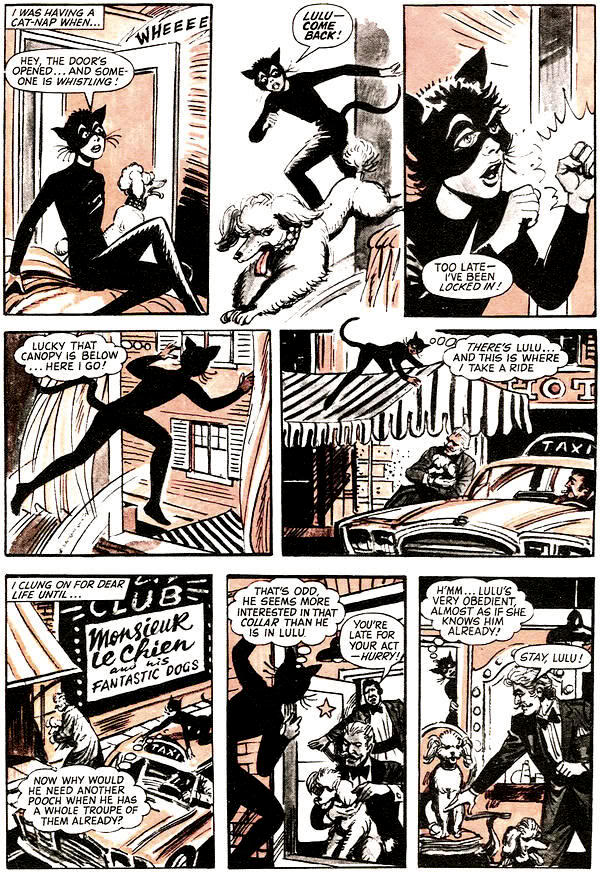 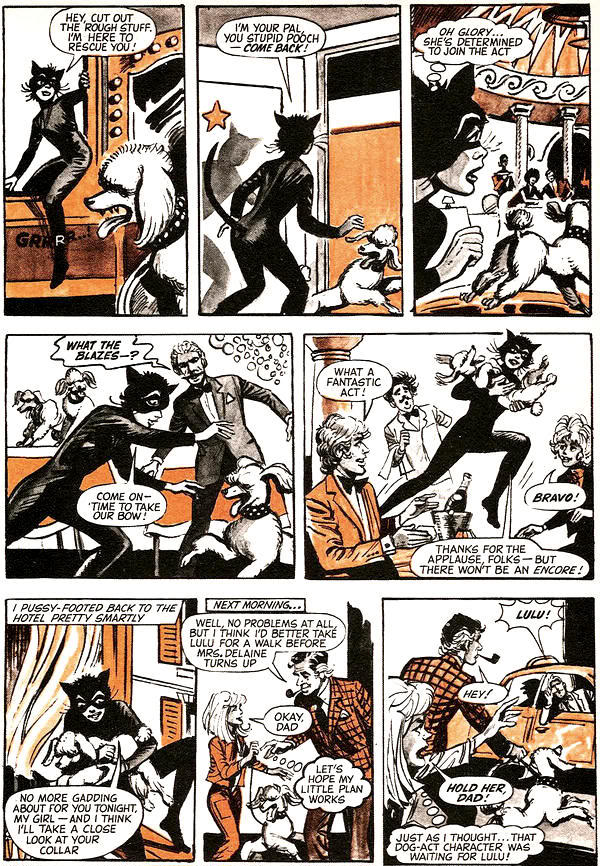 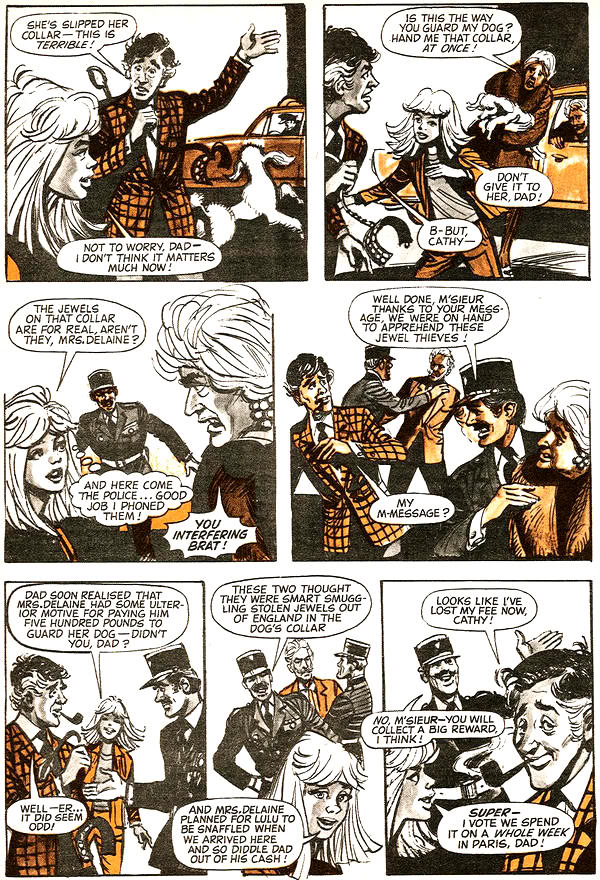 You old dog! And just when you quote your review from the "School Library Journal" you post this sexual potboiler! Riotous!

Love your new sidebar emblems from the publishers, too!

What were the other stories like in the Annual? Was that the only Cat Girl story?

Rudy, I can only enjoy so much respectability before reminding everyone that I am, basically, a dirty old man.

Curt, the stories in this British annual run the gamut of themes...a girl fights the Nazis, a girl amongst the American Indians, a girl and her dog, humor stories, dramatic stories, but only one Cat Girl story. I will probably show more from this annual at some point because I think some of the strips are well drawn, albeit anonymous. Maybe some of my UK readers can help us on this. Here's the cover of the Sally Annual 1975, which is why my wife bought it when she saw it on eBay.

I did a piece on some of the illustartors on my blog and on Forbidden Plents site Pappy. The UK's two big comics publishers, IPC and DC Thomson, used all the leading European cartoonists and even South American ones including Hugo Pratt, Morris, and Peyo. Thankfully, youngsters like me only discovered who they were working alongside years later.

Cat Girl entertained me too, but I hate that I missed out on that particular trick-or-treater.

(Not that I would have actually allowed her to escape from the Catacombs on All Hallows Eve).

I just ordered the 1974 volume. I'll post some when I get it, and if I like it, I'll see about getting the rest. It's just too bad there's not some phonebook-size omnibus reprint (I think the original comics were weekly?)--or is there? Anyway, thanks for posting this!

Hey Curt Purcell: please keep us posted okay? I would very much like to see some more of this Cat Girl stuff (or other similarly styled duotone Good Girl ingenue stuff). Future thanks!

I am sure I can remember Cat Girl getting drugged by the Eagles henchmen in one story before being dropped into a well. Fortunately her fall is blocked and when Cat Girl wakes up she manages to climb out. Such a long time ago, though!

There is a Cat Girl story in the 1971 annual, I have included a brief summary below.
Cat Girl goes undercover in a circus as the Trapeze Cat when the original trapeze artist, Kay is fired. Cat Girl is welcomed by her partner Karl, but she does not trust him. When Cat Girl visits Kay to tell her she will try and get her job back, Karl finds out and decides Cat Girl must be removed from the scene. He arranges for Cat Girl to have an 'accident'.Later she falls from the trapeze and crashes to the floor of the circus, laying motionless. Karl arrives just in time to see Cat Girl being carried away on a stretcher, the fall had obviously knocked Cat Girl out! His plan had succeeded. Or had it?

On another note, does anyone know if there are any Cat Girl stories where Cat Girl was actually overcome and captured by the villains?