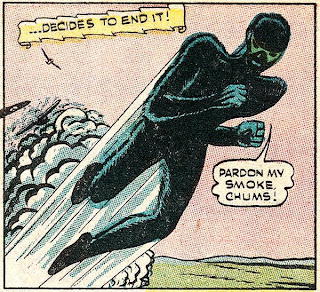 
Origins of superheroes can be so silly. Consider some of the chemical accidents that happen to turn those guys into superheroes...or nuclear explosions...or gifts from alien beings. Might as well say a magic word like "Shazam," because it makes as much sense.

Dr. Basil Brusiloff of Belgrade, Yugoslavia, is in on one of those big explosions, in this case working in his lab when the Nazis bomb the place. It turns him into a hairy ebony black guy who can fly. We can even see his hairy bum in the last panel, so is he wearing pants? It's probably no wonder that he only showed up in Captain Battle #1 in 1941, #3, and #5, and #5 was a reprint of #1. The scans for this story come from that reprint issue, dated Summer 1943. Artist Don Rico signed the strip in the last panel.

Blackout was created for Charles Biro and Bob Wood by George Roussos, because Roussos was an assistant to Bob Kane on Batman, and Biro wanted a bit of the Bat magic to rub off. At the same time, Jerry Robinson, another Kane assistant, created London for them. Blackout never hit the big time. Maybe it was the hairy bum. Even in the superhero world where logic does not rule Blackout seems more odd than most. 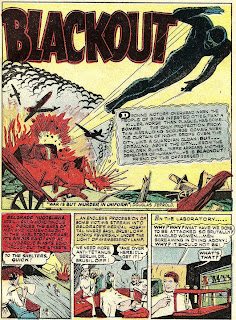 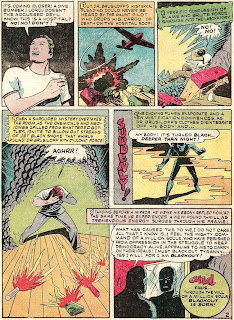 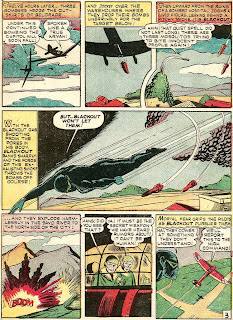 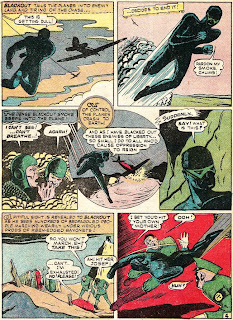 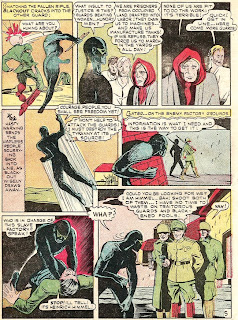 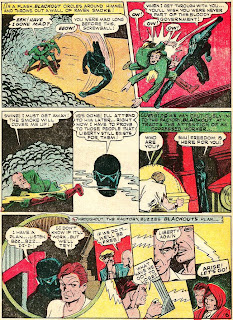 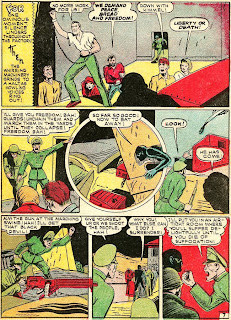 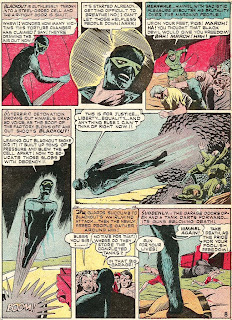 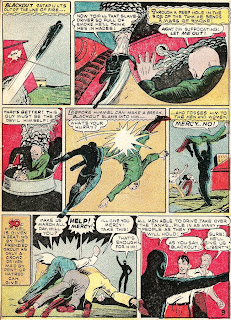 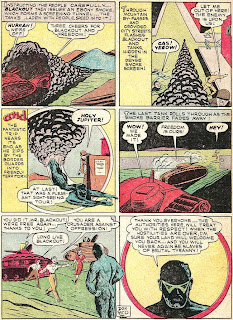 Oooooh! I have questions! (Frantically waving hands at the teacher from the back of the classroom)---

Did the chemical explosion cause his mustache to spread over his entire body?

Since he's nude and the front of his body is exposed, is it safe to assume the accident left him neutered?

Given that he's covered from head to toe with black fur, does he really need to conceal his identity with a mask?

This reads as if written by some high school creative writing student (a foreign exchange student, at that!) after a few bong hits. Which of course means that it's perfect. How this didn't become a hit is beyond me.