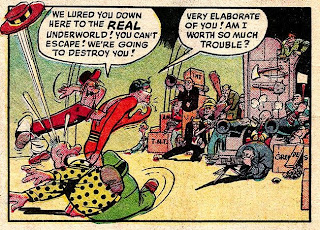 
This Jack Cole Plastic Man story is amazing. Every panel is funny, every character is in motion, doing something ridiculous. Check out the elevator gag in the next-to-last panel of page 5. It feels animated.

Jack Cole was at the very top of his comic book career when he did this story for Police Comics #95 in 1949. My scans come from a Super Comics reprint, Plastic Man #18, from 1963. To recap the story about Super Comics, publisher Israel Waldman bought the rights and printing plates to various comic books from their publishers, or in this case, former publisher, "Busy" Arnold of Quality Comics. Waldman avoided the Comic Code by not putting his magazines on the newsstand, but sold them three to a package. *

The cover to this issue is by Andru and Esposito, and while OK, fails to show how completely zany the Plastic Man contents are. (That's also the worst portrait of The Spirit I've ever seen.)

Jack Cole was one of the true masters of the comic book arts, and this story is a fine example of why. 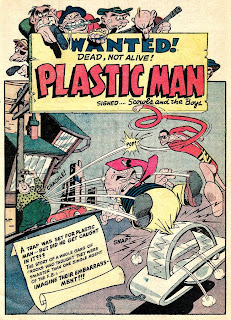 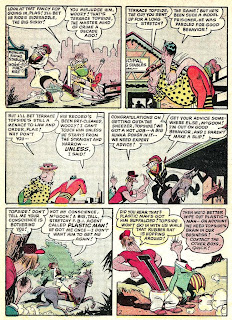 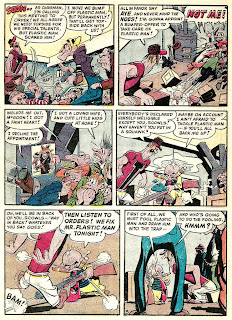 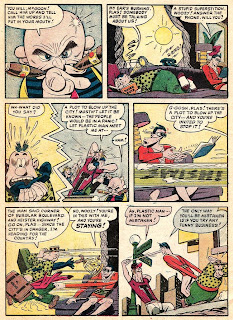 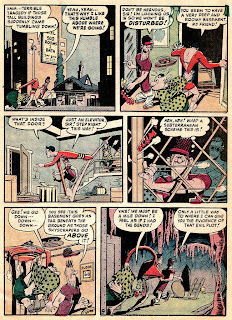 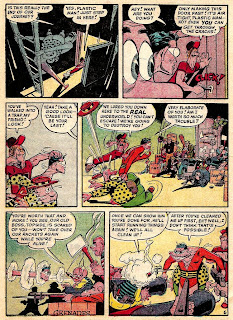 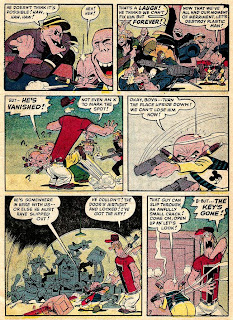 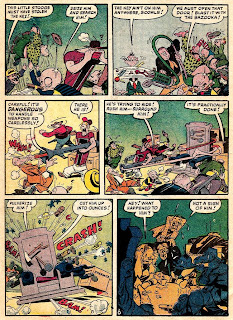 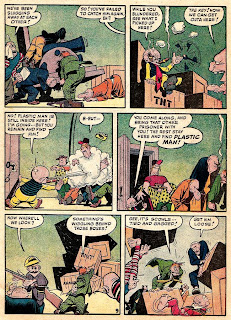 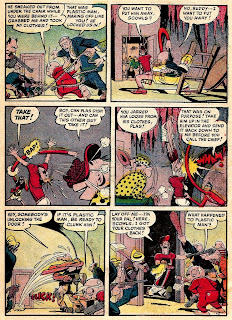 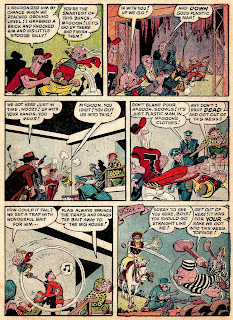 *There weren't 18 issues of Plastic Man from this publisher. There were also issues #11 and #16, but all of them were probably part of some sort of numbering system they had for their line of reprints.

A story went the rounds of comic book fans of the '60s. Some fan went to the address listed in Super Comics, and found an anonymous building. They rang an intercom buzzer, and when someone asked their business, the fan asked for "Super Comics." The person on the other end didn't respond. I'm not sure what we are to make of that story...maybe it shows that Super Comics was a shoestring operation, or fly-by-nighters. Maybe the person inside the building was busy reading comic books. Maybe they didn't know what the caller was asking for because the address was a mail drop. What I know is that Super Comics, and predecessor IW Comics, made available in the Code-strangled comic book world of the late 1950s and early 1960s, a glimpse into the wild-and-wooly comic books of the pre-Code era.

THIS IS AMAZING!!! Thank YOU!

Wonderful! I've seen quite a few of Cole's Plastic Man stories, and this is my favorite to date! Thanks for posting.

Pappy - you have arrived! Check out
http://www.animationarchive.org/2008/12/bakshi-blast-jack-coles-plastic-man.html