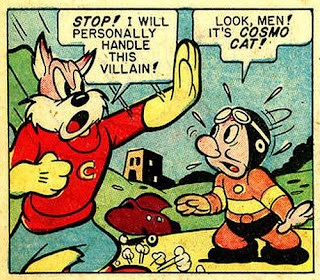 
Dave Miller, of Albany, California, recently found a copy of Fox's Cosmo Cat #8 and graciously scanned a story for me. 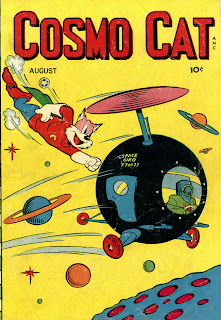 I find it interesting in a couple of ways. First, it's a slam at the perennial whipping boys, used car salesmen (in this case a used rocket salesman, the Smiling Martian, who traded Cosmo for a 1947 rocket!) Second, it has a reference to oil companies, Sub-Standard Oil, using cartoon versions of the Mobil Oil flying horse logo. You've gotta also love the last panel, "Drop me a letter if you get time, kids." Say, what? If you get time? I'd think anyone reading this wouldn't be able to write a letter, but that's just an opinion. Artwork is by Pat Adams, an artist not known to me. Is anyone else reminded of the modern work of cartoonist Milton Knight?

Tuesday, December 23: In response to the posting I got this e-mail from longtime comics fan and publisher, Marty Greim:

Hi there Pappy. I thought you might like some info on Cosmo Cat, since you just printed a story of his. Cosmo Cat was created by L.B. Cole who was an editor at Fox Comics at the time. L.B. gave me info on Cosmo Cat, because that character was a favorite of mine when I was a kid. The artist was not Pat Adams. That was just a pen name. In many of the stories you'd see an E.C. on the splash page. That stood for Ellis Holly Chambers who was the artist on most of Cosmo Cat's adventures. L.B. could copy Chambers style fairly close and did so when a few of the Cosmo Cat stories were reprinted under the Super Cat title years after Cosmo had bit the dust at Fox. L.B. did one or two new stories, but the title was short lived. Because of my love for Cosmo Cat, L.B. found a proposed cover rough by Chambers, inked it and colored it for me. As far as I know, it's the only Cosmo Cat original that exists. I've attached it to this e-mail for your enjoyment. Love your site. Many of the stories bring back fond memories of my mis-spent youth. Regards, Martin L. Greim 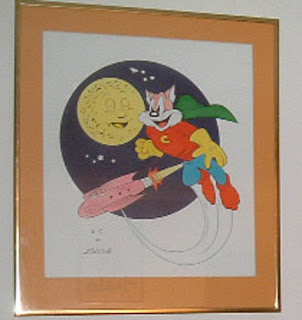 Receiving the Cosmo Cat story put me in mind of a comic I've been thinking about showing for a while, Super Pup #4 (actually #1) from 1954. Avon's Super Pup only went two issues, and you'll see why when you read it. The artwork, by Frank Carin, is crude. The stories are standard funny animal stuff, but the artwork doesn't create much of a desire to read it. However, I find the first page interesting, where the Commissioner (sic) of the Treasury Department explains about "illegal uranium" getting into the country. "Every cargo ship arriving in this country is carefully screened--our borders are constantly patrolled--" Wow. Someone tell Homeland Security. The last I heard, very little cargo coming into this country is searched or inspected, and the border is nearly impossible to patrol. Luckily Super Pup is smarter than anyone in government (not that much of a stretch) and figures the illegal uranium has something to do with the base on the moon.

Finally, and despite those criticisms, I'm drawn to these stories by a nostalgia for this sort of comic. As a kid in the age group these comics were aimed for, I found stories about rocket ships really neat-o keen-o. Looking at both of these stories I can analyze them from an adult point of view while still remembering how I would have felt reading them at age 5 or 6. I was undiscriminating in those days. Hell, I get notes now and then telling me I still am. 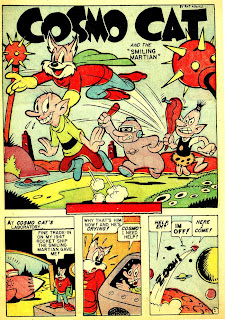 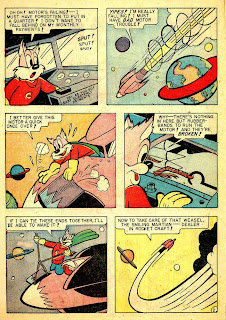 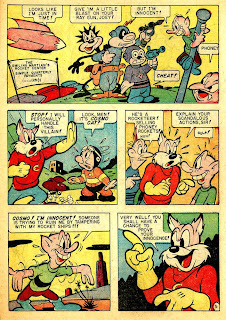 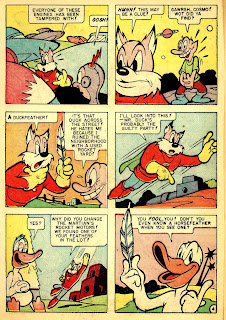 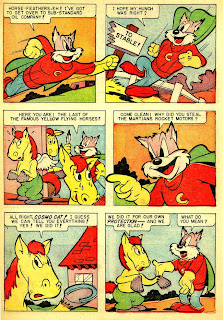 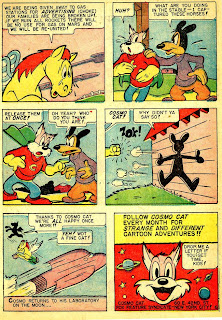 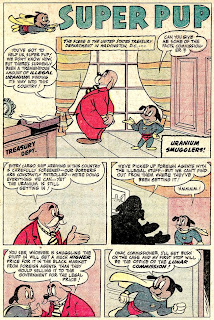 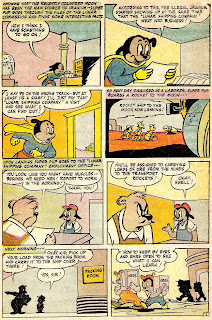 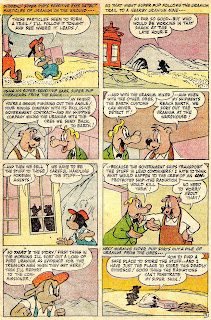 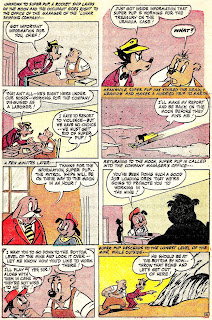 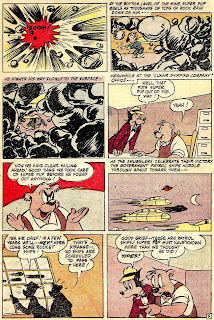 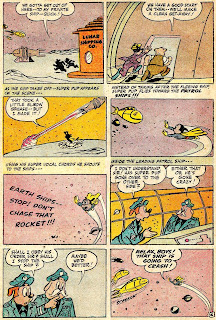 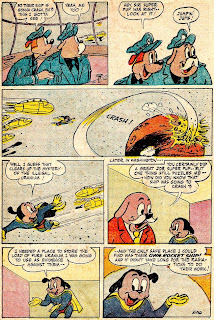 I didn't care too much for the Super Pup strip, Pappy, but I really liked seeing the Cosmo Cat story.

If there are any more of those available to you, please post them at your earliest convenience and have a "Happy Holiday".

Papy, you musta been in a bad mood, tellin' us that we “wouldn't be able to write a letter”, and callin' the artwork for Super Pup “crude”. (As to the latter, it's primitive, but it's fairly clean.)

Oeconomist, I'm not sure I was in any worse a mood than usual. Being a cynic and curmudgeon is my natural state. I was just calling 'em as I see 'em.

Chuck, maybe my buddy Dave will share more of those Cosmo stories with us. He's a busy guy, and I don't like to bug him too much. But yeah, I wouldn't mind seeing more.

I like how he essentially murdered the bad guys by making them crash, and smiles about it in the last panel!

you can see more Cosmo Cat at the digital comic museum but you do have to register first.