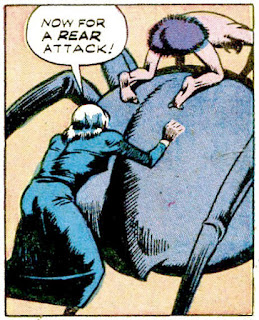 The Spider Widow “has the ability to control black widow spiders,” (Public Domain Super Heroes) a power I would pass up if offered. I have nothing against spiders; they have their place in the ecosystem, but as long as they aren’t climbing my walls I am fine. Despite an aversion to real life spiders, I chose this particular story because of the giant “spider” in the splash panel. The story is drawn by Frank Borth, an unsung artist of the Golden Age and beyond.

The Spider Widow, who wears a green witch mask, works with a costumed character called the Raven. There was also a Raven in Ace Periodicals comics, including Lightning Comics, around the same time. Neither Raven lasted very long in the comics. In this story the Spider Widow goes up against creepy Spider Man, who is obviously not today’s Spider-Man.

After returning from the war artist/creator Borth worked on a comic strip, then was a mainstay for years in Treasure Chest, a comic book for Catholic school kids. Like other artists who worked in Quality Comics before and during the war, Borth was inspired to do his best work by working with hot-shots like Reed Crandall, Lou Fine, Will Eisner, et al. An interview with Frank Borth from 2006 is included at the Catholic University website. 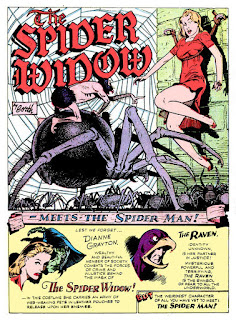 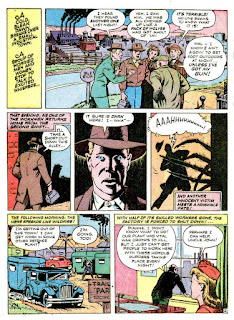 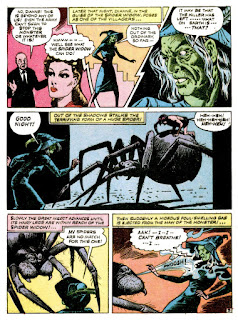 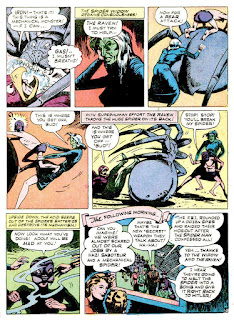 It is December, and I have all of the stories and postings for this month in the Blogger queue. I want everything to work like it is supposed to, because after my final posting of this month, December 30, I will retire from Pappy’s. After 13 1/2 years it is time to go out while I still have the energy to do something else.

I don’t want to retire without thanking all of you for visiting this site. Many of you visit every time there is a new posting, three times a week. I deeply appreciate all who have been with Pappy’s since the blog — and you and I — were young. I think you understood what I have been trying to do, and when you have commented, especially in the last couple of years, you have been kind to an old man who spent his days squinting at his computer screen.

With any luck Pappy’s blog archives will be online for a long time. Although I will not be contributing, you and future readers will be able to go through a couple of thousand postings.

Best wishes to you all. Your friend, Pappy
Posted by Pappy at 12:01 AM

Thank you so much, Pappy. Whatever you do next, I hope it's enjoyable for you.

As other things demanded more if my time, I cut back on reading many 'blogs in art, on comic books, and on design, until just yours remained. It was the one that I most valued.

I hope that you will find great satisfaction in whatever you now pursue, so long as it isn't some terrible criminal activity.

Thank you so much for the joy you have brought me over the last 8 years of reading your blog. I don't know why but even as a kid I found most of the Golden Age heroes when they showed up more fun than some of the ones I had in the 70's. In reading through your collections, I have come to realize that I had only seen the 'best' of the 'best' but even the 'Hey I have a dime store mask and a million dollars.. hey orphan boy I just found, lets go fight crime!' were hoots at times.

Thank you again. I have really enjoyed your labour.

Sorry to hear that you're retiring the blog! I started reading comics around 1956 but I've seen many things on this site I knew nothing about. Yesterday's post of Boody Rogers Babe was great. Rogers was completely unknown to me. Best wishes!

Thanks for everything, Pappy! Enjoy your retirement!
Tom Peyer

Thank you so much for everything! I am sad because it seems that all my favorite blogs are slowly ending. I hope the best for you in your "retirement". I will be just one of many that will always appreciate all you have done.

I'm sad to learn of the suspension too. It will be deeply missed. You and the other readers often were the highlight of my day. I hope you enjoy whatever you take up next!

Well rats. I've been coming here and reading comics for years now. For over a decade! I know that had to be an awful lot of work, those thousands of posts. And I appreciate it so much. I've learned a lot about an age of comics that I thought was far simpler and more easily categorized than it really was. I sure am going to miss this blog, Pappy. But not for another few weeks yet.

Great spider art in today's entry. I've never heard of the Spider Widow before. I really dig the way she disguised herself as an old witch. I think I'm going to pretend she took a job as a horror host when her heroing stopped paying dividends. There's just something creepy about knowing somebody's got a bagful of spiders on their person, whether you ever get to see 'em or not.

Thank you for this wonderful blog. I have been a regular follower since I first discovered it five years ago. God bless and keep you sir

I'll be sad to see you go, Pappy. I looked forward to your posts so much and discovered so many things here that I'd never heard of before. Best of luck in whatever you're doing next!

I'm going to miss you, Pappy. I look for your posts every day. I hope you enjoy your future projects.

Thanks for all the great posts, Pappy

Pappy, I’ve loved reading your blog regularly, such a treasure trove of great content and clearly a labor of love. You will be sorely missed. Thank you for all the fun and discovery you’ve brought your readers. Be well and enjoy your next chapter - Godspeed!

You will be very much missed! Not just for the wonderful stories you've posted over the years, but for your comments and insight. I can just say "Thank you!" You've been a part of my daily browsing for a number of years and I hope you go on to greater and better things. Just remember that you're always welcome to return if you get the "itch".

This is one of the best blogs around and your new entries will be greatly missed! Thank you for sharing so many great comics here over the years. Your efforts have been truly appreciated.

Pappy I will miss your postings. On a regular basis I view your blog along with Ken Levine and Mark Evanier...and I never would have found those two if it hadn't been for you. Remember the next time you're in the Portland, Oregon metro area we should get together and have a decaf espresso and look at old fanzines!

Fun stuff. Thanks for all your dedication.

Very glad for have met your blog. Thanks for all the work and dedication.

What a blog. What an experience. I have been around blogs since the beginning--was able to witness their birth, renaissance, and now, slow decline. But your blog was always amazing, always the one I had to visit two or three times a week.

Congratulations on your retirement--I hope you have second thoughts and zap us new magic from time to time.

Thanks to all of you who have commented. As you might imagine I am already feeling a sense of loss. Looking at old comics as I clean out my basement I think, "I should scan this!" but then remember I'm supposed to be taking it easy.

Before I began the blog in 2006 it was going to be a horror comics blog, (you know, what Karswell does so well with his The Horrors of it All blog), until I decided to have it cover the history of comic books. Even so I thought I could do about 300 postings and then quit. So much for plans.

I am very happy, reading your notes, that I made some sort of difference.

Thank's for the great comics and all the time spent sharing them and writing about them!