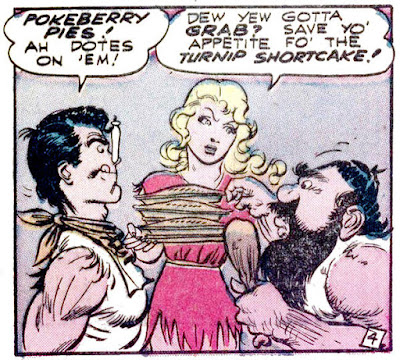 Didn’t I just show a hillbilly story a couple a few weeks ago? Sure did, from Babe #2 by Boody Rogers. A hillbilly, according to Merriam-Webster’s Learning Dictionary is “a person who lives in the country far away from cities and who is often regarded as someone who lacks education, who is stupid, etc.” It is a crude depiction, and is long past a need to be retired. So forgive me, folks, because I don’t want to insult anyone, but I also want to show how popular the spillover from the comic strip Li'l Abner was. Creator Al Capp was a satirist, and his comic strip about the residents of Dogpatch was very popular. There were imitations, including Looey Lazybones. The last few Looey stories (the feature ended in Thrilling Comics #73), were drawn by Frank Frazetta.

This episode was published toward the end of the series, from Thrilling Comics #70 (1949). 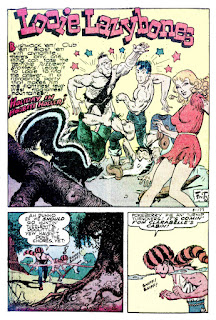 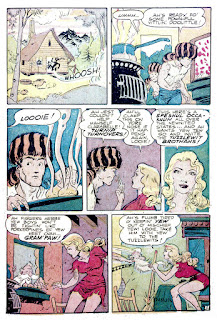 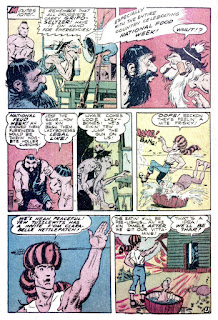 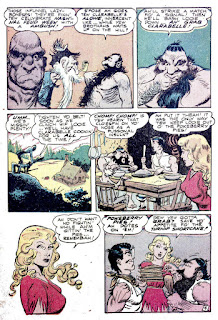 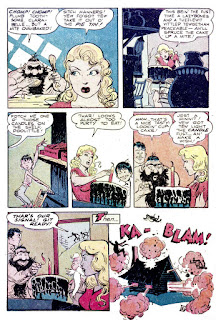 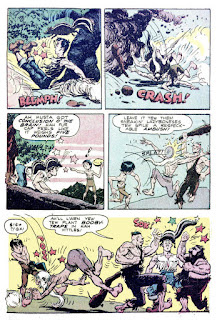 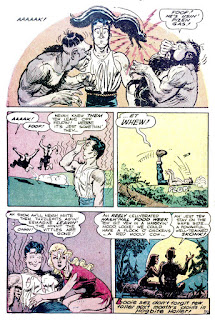 I never could buy Frazetta as a cartoony artist. He poured on the exaggerated characters and poses but he couldn't suppress his desire to be drawing heroic fantasy instead. You're right about comic book knock-offs of Li'l Abner. When I started browsing the Golden Age archives at ComicBookPlus I was surprised to discover how many Abner imitations there were. I don't know if that was because the original feature was so popular or because editors considered Abner easy to copy.

I know of various national food weeks, but each is to celebrate a specific variety of food (such as raisins, which have a week in April or in May). The idea of a week to promote food in general would seem rather needless, and one to commemorate it rather grim. Of course, the National Food Week is to set-up a joke about mistaking “food” as “feud”, but who actually laughed?

I think that this story was published about three years before Frazetta began ghosting for Capp on Li'l Abner (in the good old days, in which people understood where to put apostrophes). As bad a person as Capp could be otherwise, I've always found it remarkable that Capp was later to treat Frazetta not much differently from how Fisher had treated Capp; some people can't see things even as those things stare them in their faces. In the end, though, many things may have been better for Frazetta having been driven from Li'l Abner.

Given a choice on the various LI'L ABNER knock-offs, I think I prefer Boody Rogers' BABE, as he comes the closets to Al Capp's sensibilities (and actually out-does Capp on sheer insanity!). But LOOIE LAZYBONES is a close second. It's interesting to contrast Frazetta's LOOIE with what he would do working with (for) Capp on the genuine article.