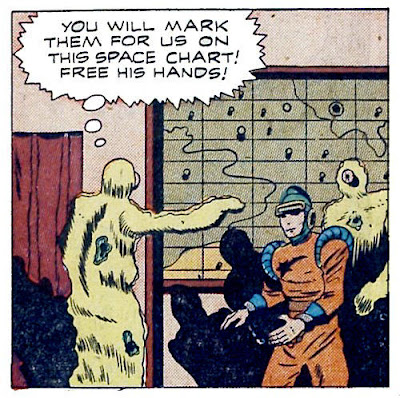 I think I mentioned once that in the early '70s upon first acquiring some Nedor comics for their Alex Schomburg covers, I was somewhat appalled by the contents, with what I thought were dopey characters and dopey stories. I've read so many comic books since then that I am practically immune to that sort of thing, which means, I suppose, that I am becoming de-sensitized to dopeyness. In those long ago days Lance Lewis was one of the characters I thought to be below my dignity as a “mature” comic book connoisseur to be reading. How things have changed.

Lance didn’t last for long in comic books. He was in two issues of Mystery Comics, and nine issues of Startling Comics.

“The Nedor comics were renewed by Popular Library, which was eventually bought out by Fawcett Books. When Fawcett went out of business, Popular Library was sold to Warner Bros. A number of different publishers, however, are currently/have been using these characters without any lawsuits from Warner Bros., so any action over them is (probably) unlikely. They are still, however, ‘use at your own risk’ characters.”

I admire those comic book fans who take the time to look up information like the above. I understand why someone would modernize a public domain hero for their own character, but much of the charm for me in the original is that it comes across as naïve and silly, and of its time. 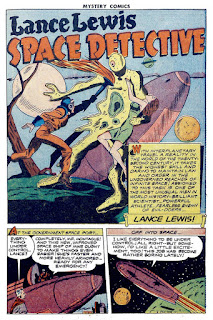 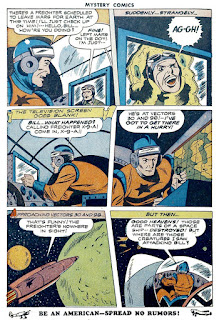 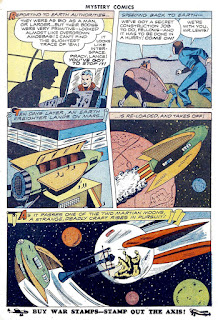 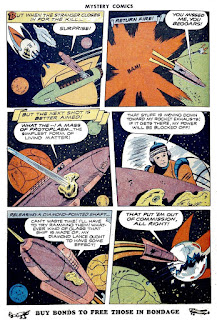 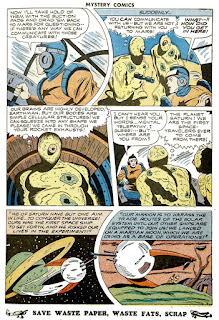 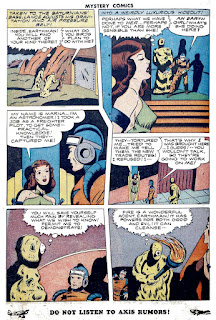 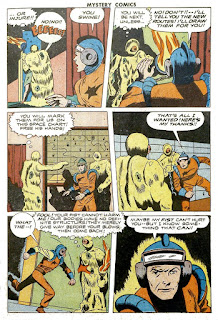 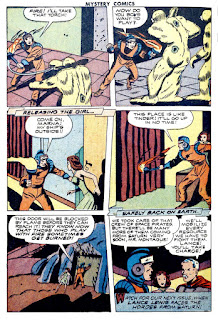 Once again, a comic-book story promised a sequel that would never come. Lance Lewis returned in Startling Comics #44 (March 1947), but the amoebae did not.

I dunno, Daniel...I've been cleaning out my basement (at long last) and encountered some strange critters crawling around. I think of things like amoebae when I see them. Then I realize how comic books have affected my perceptions of reality.

One of the things I always loved about these old space operas is the underestimating of the infinite vastness of the universe. These space explorers are constantly rocketing from one planet (or solar system or galaxy) to another as easily as I might drive from Detroit to Cleveland. And more often than not the ultimate goal of many of these villains was the conquest of the UNIVERSE!

Thanks for doing this blog for so many years Pappy. Always entertaining. My morning coffee just won't be the same.

Rick, there were just all kinds of things writers of yesterday didn't know about space travel as we know it today. Zero gravity was never a problem for those comic book spacemen.

I posted a bunch of space stories over the years and by just writing rocket into the blog's search engine I found several stories involving rockets. One thing I am learning about growing old is that this sort of stuff slips away from me...by following the links from the word rocket I was seeing stories I had completely forgotten. I am encouraging readers who have following Pappy's for years to go back into the archives. It can be fun. Maybe by doing that your coffee won't taste so different.