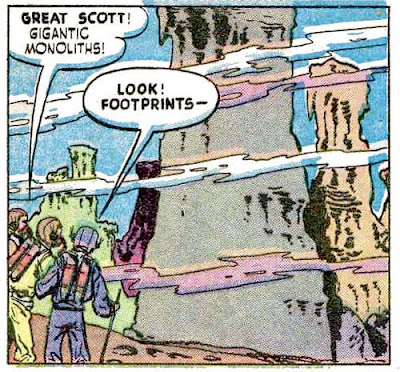 Calling All Boys was a comic book published by Parents’ Magazine Press, in an attempt to publish wholesome comic books, yet cash in among the piles of questionable comics that were bought by millions. It lasted, under that title, through issue #17, 1948, and then the comic was re-titled Tex Granger, starring a Western sheriff. Today’s story features “Bigbrain Billy” in an adolescent fantasy of space travel and monster conquering. It was Bigbrain Billy’s last appearance, so the promise at the end of more to come is unfulfilled, but there is enough to entertain us, anyway.

It is an adolescent fantasy because it is what I would have dreamed up for myself when I was 9 or 10 years old. A couple of young boys (accompanied by an older man, whom I would not have included in my fantasy) are allowed to take an expensive rocketship, without any apparent training, to Saturn, where they find creatures who blow bubbles at them.

The bubble-blowing creatures remind me of the old Dubble Bubble ads that were in many comic books of the early fifties, starring Pud and his gang of gum-chewing, teeth-rotting children, having adventures not unlike Bigbrain Billy and his pal have on Saturn. You can check out more of the Dubble Bubble kids by clicking the link below.

Ernie Schroeder is credited with both story and art by the Grand Comics Database, based on indexer Jerry Bails’s research. Schroeder went on to draw Airboy. 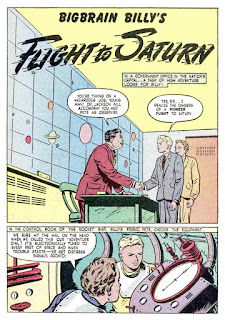 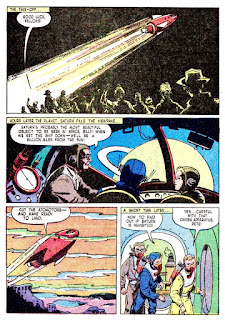 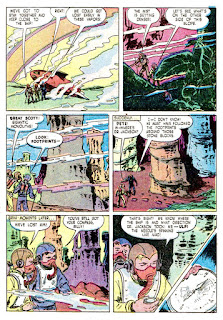 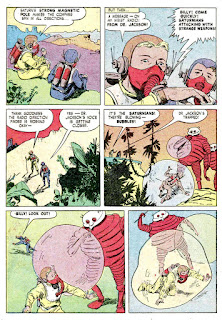 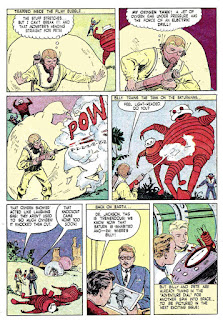 To see those promised Dubble Bubble ads, click on the thumbnail. 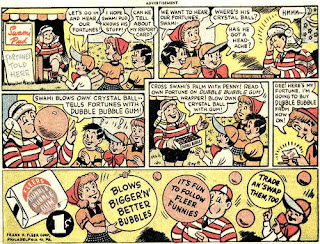 I think that the problem with the character of Billy is of a sort that has previously discussed in your 'blog and elsewhere. Billy is plainly intended to be seen as an aspirational hero, but he isn't suitable as such because he is too young. If a child is about Billy's age or older, then he or she has no time to become like Billy. (Kids who were already like Billy would be a tiny market at best!) The rest of us might like Billy, but we are largely obstructed from imagining ourselves as Billy.

There's not much new to the story itself. The writer was surely constrained by deadlines and perhaps by an imposed page-count. But it would have been nice to see the bubbles used as something more than just really tough hunter's nets.

I know that there was a desire to reassure the readers that Billy &alii had not done something quite terrible, but they were in no position to know that the oxygen had worked as an anaesthetic, as opposed to a gas with high toxicity.

My sister got something called "Calling All Girls" in the early 60s -- any relation? It and the similar "Humpty Dumpty" were printed in a sort of digest format with two-color printing on newsprint paper, with some comics but mostly kid-oriented stories and articles.