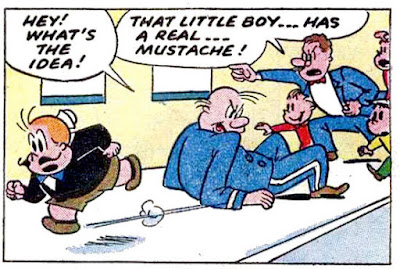 This is one of my favorite stories of Tubby, Little Lulu’s pal. I think you can see the story’s ending coming, so I won’t belabor the point, but I have tacked on another element that caught my attention. The cop chasing the mustaschioed Tubby while yelling, “It’s against the law for a little boy to have a real mustache!” is a reminder that as kids my friends and I used to argue about what was legal. If I had seen this story at age seven I would probably have thought that a handlebar mustache on an underage boy was illegal. After all, a cop said it!

From Tubby #9 (1954). Written by John Stanley, and drawn by the Irving Tripp studio. 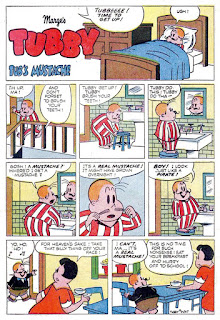 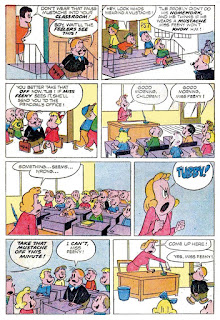 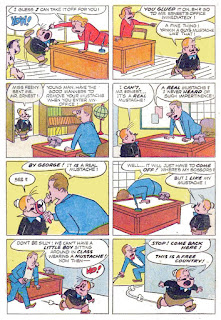 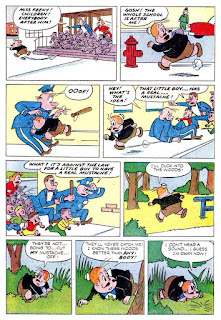 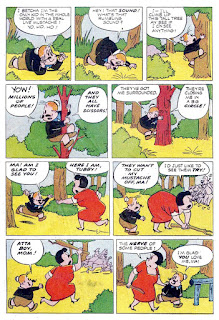 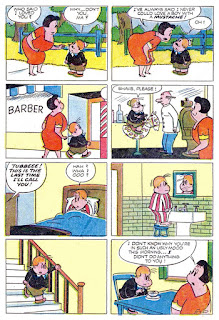 On more than one occasion, and American police officer has effected an arrest or written a ticket on a presumption that something were illegal when it was not.

The story was a good one in spite of the unsurprising resolution. But, while I don't know how Stanley might have managed it here, I'd rather have seen a story whose lesson were that the greater part of society sometimes makes demands without any felt need for justification.

Very cute! I like how the principle just up and gets the ENTIRE SCHOOL to run out into the street and chase one student!

Brian, the principals in the schools I went to stayed in their offices. They had to keep that air of authority. If you got sent to the principal's office, better have your will signed and notarized, cuz you weren't coming out. That was my feeling, anyway.

In the '70s I worked with a World War II vet who said he thought all young men with long hair should be marched to a barbershop and be shorn of their locks. He said something about it offending God, therefore "illegal" on those grounds, even if not considered an actual crime. A few weeks later he said he had been doing some research. He found out that about every 100 years or so (according to him) long hair becomes fashionable again. At that point he backed off his complaints.

Some people assume God is also offended by the very things that offend them. Those folks can be very, very tiresome.

I've long thought that, if I had more skill and more time, then I would paint a depiction of the Sermon on the Mount in which all members of the audience were blond-haired and blue-eyed, the men clean-shaven and with crewcuts, the women with flipped hairstyles, and everyone under their tunics wearing the sort of clothing found in the popular American advertising of the postwar era.

Daniel, it might have been done! This guy from Provo Utah turns the president into a saint, and his enemies into devils.