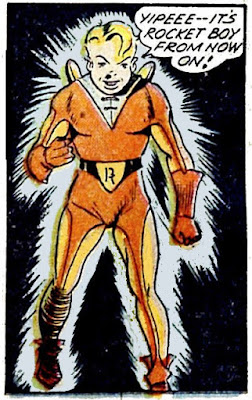 There is an act of sadistic violence in this origin story when the gang leader orders his men to throw a knife at a bound police officer. The gangster who hit the cop in the head with the knife got $100. As far as I can tell Rocket Boy didn’t gain extra powers, no super strength or invulnerability when gifted by the flying pair, so the gang must’ve been inept in order to be beaten by a single youngster, jet pack or not.

Rocket Boy appeared in Scoop Comics numbers 2 and 3, Major Victory Comics #3. and Punch Comics #12. His short career was in comic books from Harry “A” Chesler, a publisher who also had a comics shop, and various accounts among other publishers. This is from Scoop #2 (1942). There is no credit listed for the writer, but the artist is identified as Bill Madden. 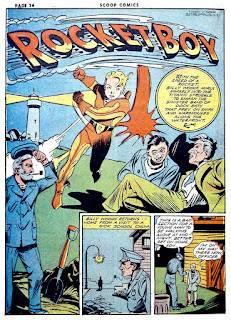 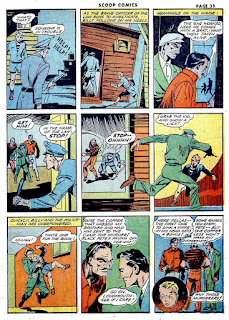 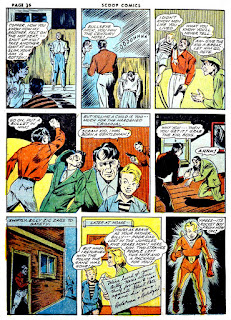 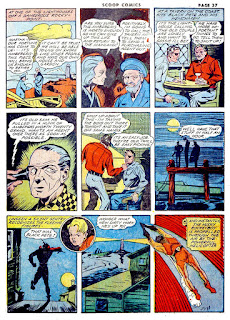 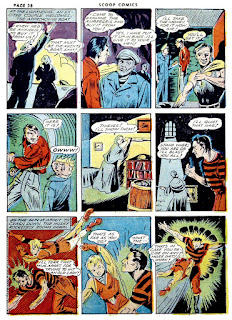 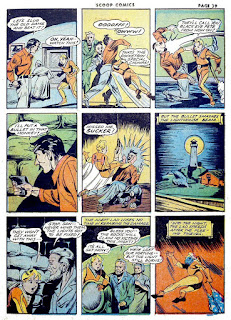 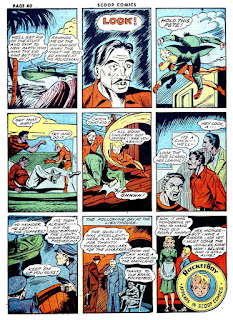 Here is the Rocketman and Rocketgirl story I showed in 2014, also from Scoop Comics #2. Just click on the thumbnail. 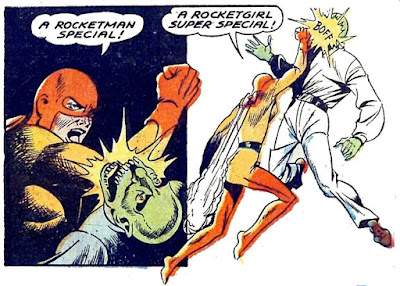 Mrs. Woods seems awfully sanguine about 2 strangers leaving her son a crime-fighting outfit (MAYBE with a set of instructions).

For some reason, I cannot imagine my own mother giving a package to me left by two strange people. Even now, she'd probably contact the authorities and give my rocket suit to them, telling me about the matter only as those same authorities were on their way to interrogate me.

Darci, Daniel, you and your mothers are probably a lot smarter than this kid's mom. Especially if the kid put on the suit and took off in front of his mum.

Something else bothers me. Did anyone ask how much fuel is in the tank? Or did I miss something? My fear, upon being given such a suit, would be me flying about a half mile above the ground and running out of rocket fuel. Splat! Goodbye Rocketpappy!

Good point. We're so used to Rocket Man, Commando Cody, and Larry Martin flying around all week on one tank of fuel that we didn't notice. Forget the flying rig, get me that fuel!