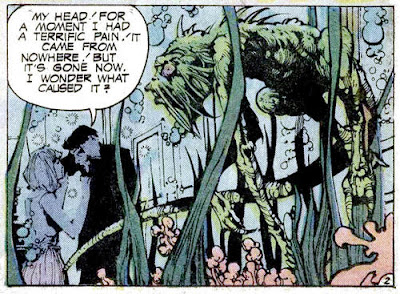 Alex Niño is one of the artists to come from the Philippines to American comic books in the 1970s. His style is unique, even among such an artistically talented bunch. DC editor, Joe Orlando, at some point threw up his hands and claimed he couldn’t tell what Niño was drawing. “Fish Story,” from Orlando-edited Secrets of Haunted House #1 (1975), while stylistically different from most other artists, is easy enough to follow. The six page story reminds me of not only the movie, Creature From the Black Lagoon, from 1954, but even writer/director Guillermo del Toro’s 2017 The Shape of Water. Written by Jack Oleck, “Fish Story” has its own twist.

Niño went from comic books to animation. According to online biographical information, he now paints. To go back to Joe Orlando’s opinion, some of the work Niño did, especially for Warren, was so ornate it was difficult to follow. I also feel some of his visions were so avant-garde for comic books that they impeded the story telling. But, I still like looking at it.

Another Filipino artist, Luis Dominguez, did the cover illustration. 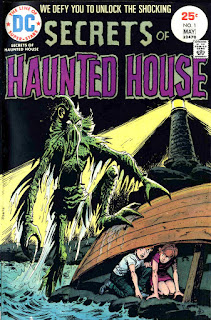 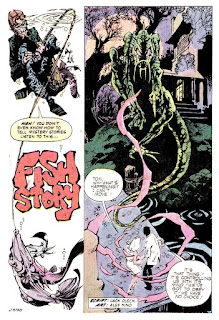 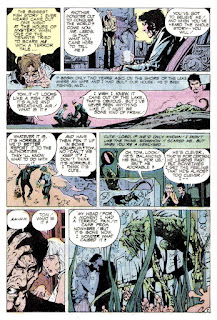 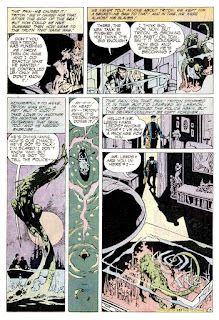 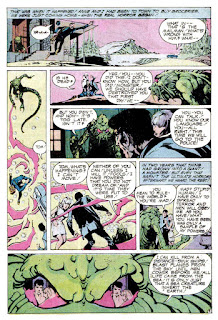 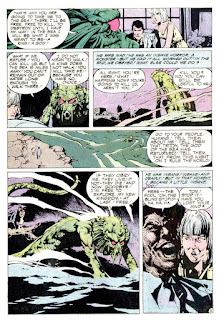 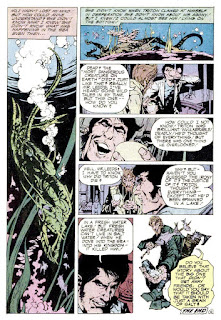 I was never a fan of Niño's work, and the job that he did in a graphic adaptation of a story by one of my relatives cemented my dislike. The work in that case wasn't highly stylized; it was just lazy and sloppy.

The twist at the end of the story was basically a very good one, but it wasn't properly set-up nor handled appropriately at the end. Triton displayed an apparent awareness of conversations that he wasn't expected to hear, and he seems to have rapidly learned a very great deal about the world while either in a tank or in the lake; thus, as well as an ability to inflict psychic pain, he seems to have had an ability to read minds. So he should have sensed Tom's expectation that seawater would prove deadly. Also, as there are some gilled creatures that can survive both in freshwater and in sea water, and as there are others that cannot indefinitely survive in one but which do not succumb quickly in it, Tom should not have been so sure of the outcome without witnessing Triton's struggles. By writing the story to have Triton not be a mind-reader and to exhibit signs of acute distress visible from the shore, the twist could have been made to work much better.

As I've probably said many times before, the problem with DC's post-code horror stories is the art was usually beautiful -- as it is here -- but the stories were usually very bland. This one is a good example. Still, the art goes a long way to saving this, and I didn't have a problem following it.

As for the Warren work -- yeah -- ornate is the right word for it. Near the end of the Warren B&W runs the artist they used were incredibly talented but incredibly dense. I can see where Orlando was coming from!

Brian, there may have been an abundance of caution during the '70s, producing comics under the Code, but the Comics Code was adapting itself during that period. As I understood it, publishers were able to plead their case that they should be able to publish stories that met the standards that television was showing to general audiences at the time. A few hells and damns in the dialogue, for instance. (I find it interesting that even the goriest horror comics of the early '50s self-censored themselves when it came to so-called curse words.)

Ah, Daniel, you drop in “the job that [Niño] did in a graphic adaptation of a story by one of my relatives cemented my dislike. The work in that case wasn't highly stylized; it was just lazy and sloppy.” Then you don't tell us what? Tsk tsk. I won't press you, but that is provocative.

I liked the Filipino artists, Nestor Redondo and Alfredo Alcala being my favorites. Niño is someone I judge by individual jobs; some I like better than others. The Warren jobs I describe in my text I usually did not read, although I looked at the artwork. I wondered if he, and Warren's editors at the time, knew that comics are a visual medium, and the reader should be able to follow the story, at least. I think Warren was aiming for a more sophisticated and European style of comic art, and that is also something I judge by the individual ability of the artist to tell a story.

Daniel followed up with this information on the story he was referring to: Tales of the One-Eyed Crow: The Vulgmaster adapted by David Keller and Alex Niño from a short-story by Dennis L. McKiernan.