Number 2360: “How I made a killing in the murder-for-hire business.” 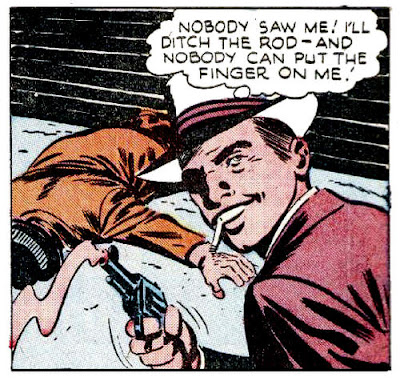 Something I read about DC Comics’ foray into crime comics in the late forties during a period of DC’s slumping sales (and the popularity of crime comics), is that they got the license for a comic book version of the popular radio program, Gang Busters. While the contents of early issues of Gang Busters probably weren’t much different than the more rowdy and disreputable crime titles, the hope was that the attachment to a popular radio entertainment would mitigate the usual criticism of crime comics. I have no idea whether it did or not. As it was, DC published Gang Busters for 67 issues until 1959. Having seen some of the later issues, all Code-approved, the stories were far tamer than the wilder days of the 1940s.

George Roussos drew “Murder Was My Business” for Gang Busters #1 (1948). If Fredric Wertham, M.D., critic of comic books in general and crime comics in particular, had seen the story I am sure he would have noticed that the joyful killer gets away with his lucrative career bumping off people, right up until he is led to the electric chair and turns into a coward. That is a way the publisher could point at a story and say the killer was not glorified during the story...after all, despite bragging about his career in killing (to a priest, of all people), inside he was just a gutless braggart.

Roussos was a journeyman who had done assisting on Batman, then worked for various companies over the years, including Marvel in the sixties where he was identified as George Bell. Roussos died at age 84 in 2000. 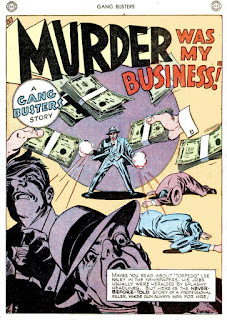 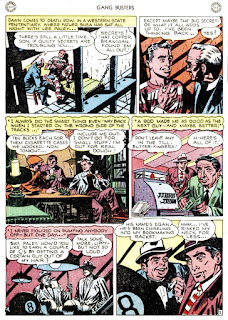 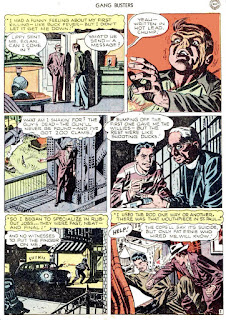 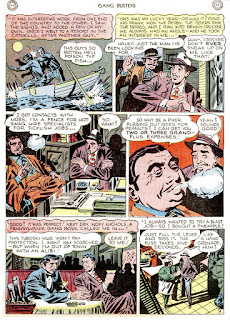 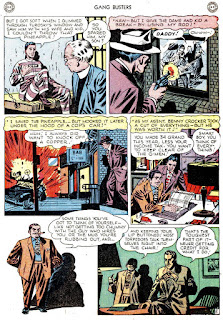 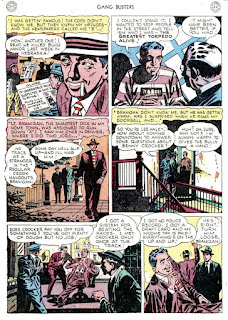 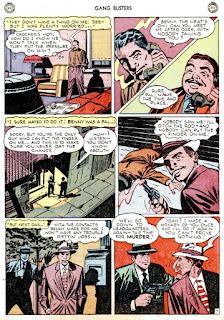 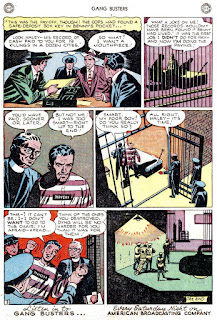 I have listened to a lot of old radio crime drama, and noted that much of it were remarkably violent. (I also noted that Boston Blackie treated security guards as perfectly expendable in schemes to trap criminals.) I wonder whether, during the dust-up that led to the creation of the CCA, anyone noted that children had been consuming stories just as dire and of essentially the same genre, for years before they became so common in the comic books. Of course, Wertham was later a crusader against crime stories on television; he probably would have been glad to go after radio programming had he been given a platform to do so.

I'm not sure why some artists adopted different names when working at Marvel in the '60s, but Neal Adams said that he brought and end to the practice by refusing to participate.

The title “Murder Is My Business” is in imitation of “Trouble Is My Business”, the title of a 1939 short story by Raymond Chandler. But, in the Chandler tale, the business is that of a detective (Marlowe) who seeks to end troubles (though the Los Angeles police force regarded Marlowe as sometimes a trouble-maker).

I'm not sure how I'd behave in the final minutes after being sentenced to death by electrocution. It would be one thing to give-up my life voluntarily in some violent effort to accomplish something important, but another to know that I was going to be marched or dragged to my execution with nothing that I wanted subsequently resulting.

It's always hilarious to me that they think a last second begging not to die makes up for -- what, a decade?, of murder and living high on the hog! Which brings up the idea -- would you want to travel the US (like our anti-hero did) hardly working and living well for a decade and then die, or be the working poor for a long life?

I don't think crime comics were making the point they "claimed" to make!

Daniel, I understood that artists didn't use their real names for a reason: Marvel was considered serious competition (to the point of paranoia, I think) during the sixties, and artists who usually made their living drawing DC's tepid superhero stories or mystery comics, were afraid they would lose their DC jobs if it came out they were moonlighting for the enemy.

Stories about DC execs and editors trying to figure out why Marvel was successful are kind of hilarious. DC was so conservative and considered Marvels to be ugly, not understanding what Marvel was doing and why they were taking over the market from the perennial best-selling DC Comics. I don't think Neal Adams had to worry about a pseudonym. First, no one would be fooled thanks to his strong individual style, and second, he was "the guy" at DC for a while when they had him drawing covers. I just don't think he worried about being blackballed by that company.

Brian, for some reason I am remembering some old movie I saw in the '70s, where a gangster who had committed all sorts of crimes including murder, kidnapped a Catholic church big shot (can't remember who) so as to force the church to have him (the gangster) prayed for after he died. At the time I yelled at the television, "Oh yeah! That'll work!"

Since the criminal in crime comics doesn't admit or feel his actions were wrong until the point of death it seems like he isn't sincere about apologizing for his life choices. No one is fooled by that. Besides, I think I saw Jimmy Cagney do a scene like that in the 1938 potboiler, Angels With Dirty Faces, and he was doing it just for show.