A couple of years ago the news outlets were full of stories of predatory men in positions of power acting in sexually inappropriate ways with females. One of them was a famous movie producer who used his power in the industry to mistreat women. And so it is with this tale of a young woman who wants to be in movies. She meets a nice guy, but nearly ruins her chances with him and finds herself in the unwanted embrace of a notorious Hollywood rogue! We know he is a rogue because he has a pencil-thin mustache. Since it is a love comic we know Lora will be spared that fate, and she does go back to the arms of the more worthy man.

So Lora will have her chance in movies, but she has already shown another talent. On page 5 she takes in hand a drape from the window and in the next panel has turned it into a slinky gown, just right for the image she wishes to project as a sexy, seductive siren (the cause of her trouble with the grabby guy). Lora’s seamstress talent with a drape shows if she does not make it as a movie star there will surely be a job in the costume department.

“Promise of Passion” is from Quality Comics’ Hollywood Diary #2 (1950). Grand Comics Database credits the pencil artwork to Sam Citron and guesses the inking is by Bill Ward. 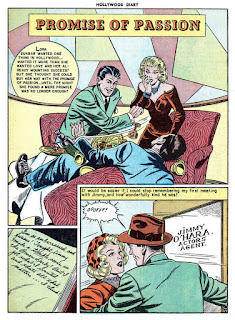 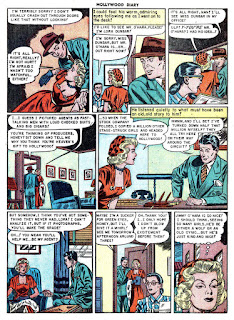 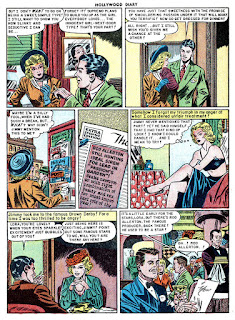 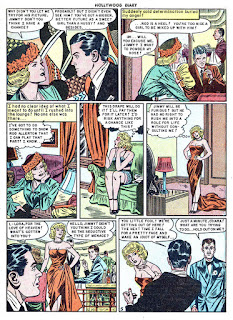 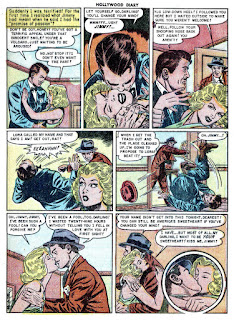 I always wondered if there as some Hollywood anecdote that inspired the similar plot element in that "Gone With the Wind" spoof on the Carol Burnett Show. Do you suppose it was this story, or were both inspired by a third (earlier) one?

Looking at https://www.lambiek.net/artists/c/citron_sam.htm makes me think Sam Citron was one of the artists on the West Coast.
Thanks!

Darci, that Carol Burnett skit did cross my mind when I saw the sequence. I don't know of any specific anecdotes that might have influenced it, but I understand that sometimes costumers have tight deadlines to work with, and apparently work some makeshift costumes, but as wild as pulling down a curtain though and making it into a dress? That I dunno.

Would it be the "movie editor" job in the Lambiek bio of Citron that made you think of the West coast? The first time I saw Sam Citron's name was in an ACG comic in the '60s, so he was working until then, at least.

Yes, it was. Perhaps someone more skilled with FindAGrave might find where he lived?

Darci, I have been down that Find A Grave rabbit hole before. I have only found two people I looked for, both army buddies. Everyone else I look for seems to end up behind a paywall, or they weren't buried.

https://www.google.com/books/edition/Schoolbooks_and_Krags/KyGg0g09OsIC?hl=en&gbpv=1&bsq=sam%20citron noted that Sam Citron lived at 444 W. 56th St. in New York City. I’m sure some census searches would help narrow it down.