Number 2367: The funny side of murder 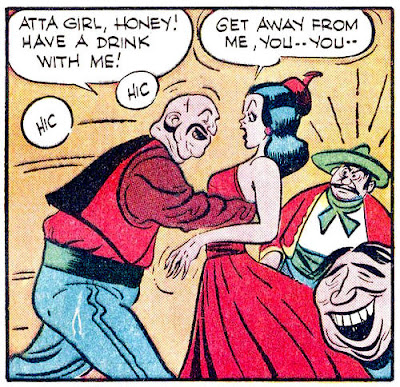 In its early days Crime Does Not Pay could be funny. As funny as crime and murder can be, that is.

Here we have two stories and a page of “gag” cartoons. (“This’ll Kill You!”) The cartoons were drawn by Dick Briefer. In one panel he drew himself with editors Biro and Wood. “The Poison Dove,” also by Briefer, looks like slapstick on the first page, but loses its funny very fast. “The Corpse That Wouldn’t Stay Dead” has some dark comedy about a barkeep and cronies attempting to bump off a homeless person (in those days called a “bum”) for insurance money. The problem is the victim keeps coming back. It is drawn by Jack Alderman. In those days Alderman had a stiff (ho-ho) art style and he used lots of ink and shadows to add to the noir qualities of his stories. The laugh it invokes in me is that Alderman drew Tweety and Sylvester stories for Dell in the late '50s. 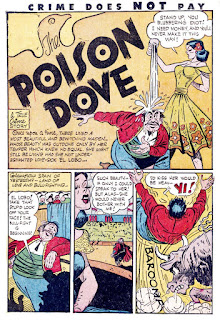 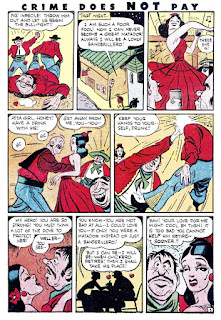 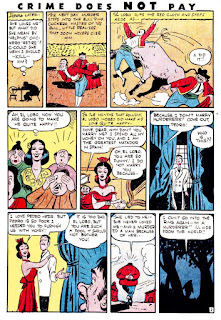 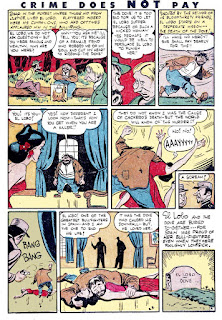 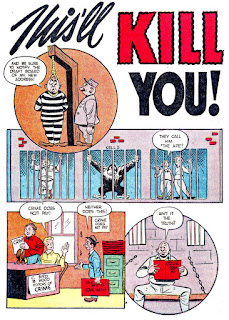 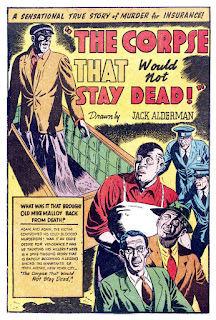 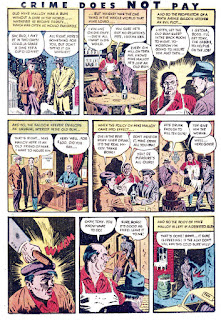 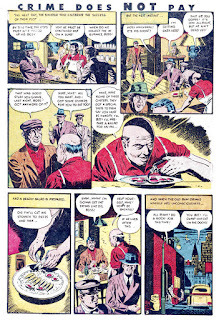 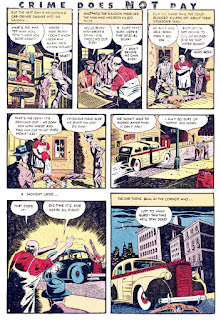 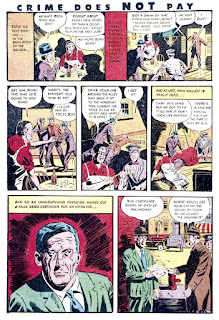 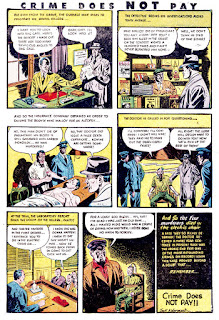 Today is the thirteenth anniversary of Pappy’s Golden Age Comics Blogzine. I have been going through some old files I saved on CD, and I found some artifacts from 2006 of what I had originally intended for my blog. I was going to do a horror comics blog, and it was to be called The Grim Reader’s Horror Comics. I stole...errrr, appropriated some prospective headers from a Mexican comic book, and then had second thoughts. First, at that time I did not have enough material to scan for an all-horror comics blog. However, I had a couple of boxes full of golden age comics in varying degrees of bad shape, just right for scanning and presenting. A year later or so the idea of a horror comics blog, The Horrors Of It All, was brought to life by Steve “Karswell” Banes, and a very fine job he has done of it.

Here are the re-purposed and original images from a Mexican horror comic from 1987, Sensational de Terror. It’s a small comic book, 4 1/2 inches by 6 inches. It is missing now. I can never find it when I am looking for it. It hides from my sight by having larger comics put on top of it. 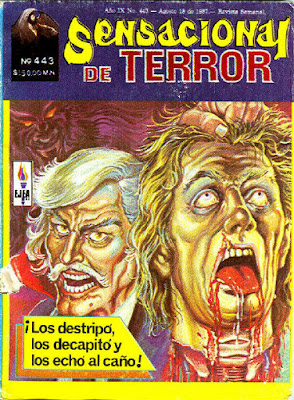 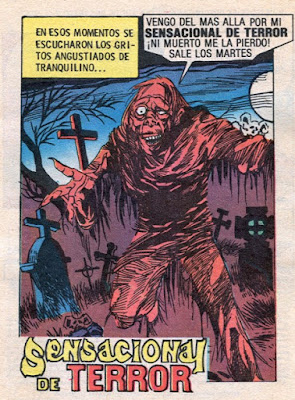 Congrats on your longevity.
Thanks for hanging in there so long.
Cam across your site while checking to see if my seo
is working and my new site is getting some attention.
I love golden age comics. After a few tries i have come
up with a way to share my passion. I call them comix book movies.
Basically golden age comics in a slide presentation format which makes them readable on line.
Maybe your readers may be interested...youtube/gharold...
Let me know...i can coordinate you blog post release with a comix book movie release of the same book if you like...if I can help out with what I do...let me know..and again..thanks for hanging in there all of these years

The guy holding the head looks like Dick Van Dyke in his "Diagnosis: Murder" days!

When I saw that first panel, before reading the text I knew right off that it was Briefer's work.

As for the story of Mike Malloy ("The Corpse That Wouldn't Stay Dead"), it inspired a group of "Yours Truly, Johnny Dollar" radio episodes (during its 5-a-week period) called "The Iron Mike Matter" (with Howard McNear as Mike)... and an episode of the '80s "Amazing Stories" TV series.

Happy Anniversary, and here's to many more!

Both these stories (not counting the gag page) are a really good indication on how to and how not to draw a comic.

Now, to a non-comic reader, if they first glanced at the two styles, they would say the first one wasn't as skilled. But as you read both of them, Briefer's page come alive with movement and action. Everything in Alderman's story is well rendered (most of the time) but it's so static and flow between the panels is muted.

That said, it's a better story on the second one, I appreciate the black humor in the Rasputin nature of our homeless "bum" who seems impossible to kill.

I read of a very effective way to kill matadors. A bull, in effect, believes that the cape is part of the matador's body; bulls can be taught to ignore the cape and to charge at the actual matador. Really, it's no more than a matter of giving the bull a little experience.

It isn't clear why only after learning of the Dove's insincerity el Lobo should decided that, as a murderer, he should leave the ring. And there was no mention of Pedro's fate.

The true story of Mike Malloy is rather more bizarre that the fictionalized account. Amongst other things, at one point the conspirators got another fellow drunk, put Malloy's identification in his pockets, and ran over him with an automobile; that fellow too survived. Even killing a stand-in for Malloy was surprisingly difficult.

Daniel and rnigma...Guess I missed that one! I thought I'd heard something like the story of Mike Malloy before. It seemed familiar, and now according to you guys, it is a true story that has been told before. I probably even saw it on Amazing Stories.

Smurfswacker, now that you mention it...it does bear something of a resemblance to Van Dyke, but c'mon...he has a very pleasant, non-threatening image. To see him holding up a bloody head, no way!

Brian, frankly, I don't know how much more I have in me. Maybe a lot, maybe a little. I'm just taking it day by day (or month by month) nowadays. Whenever I grumble that I'm going to quit Mrs Pappy says, "...and then what will you do?" Since she'd put me to work, maybe I'm better off hunkered down in front of my computer screen than cleaning out the basement or some other horrible fate.

Webmaster Mac, thanks for the offer, but I have been a one-man operation since my first posting. I am too much of a loner to work with someone.

Wow, happy birthday! Your blog's a teenager, Pappy. Now it'll be staying up all hours talking to boys on the phone, sneaking beers into R-rated movies, the works. Before you know it, you'll be teaching it to drive a stick.

I especially love this Briefer stuff. It may your anniversary, but I feel like we're the ones who got the present. Thanks for everything.

Cavin, thanks for your longtime readership. I don't know what I'd do if I couldn't count on you, Daniel, Brian, and Darci, and probably others who don't write (that's okay, you non-writers...just keep looking in. I don't require you to write a letter.)

I like your idea of my blog being a teenager. I was a teenager when I first got the urge to write about comic books.