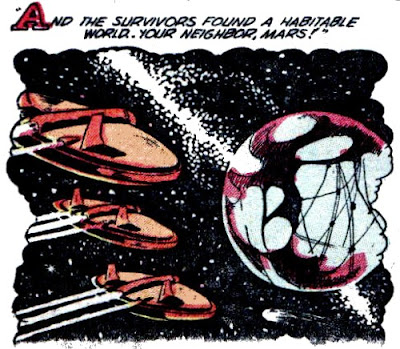 It was 72 years ago today, July 8, 1947, that The Roswell [New Mexico] Daily Record published its famous headline about the “captured flying saucer.” It was denied by the Air Force, the newspaper withdrew the story, and it went away for many years only to return a few decades later. It has now implanted itself in our consciousness. 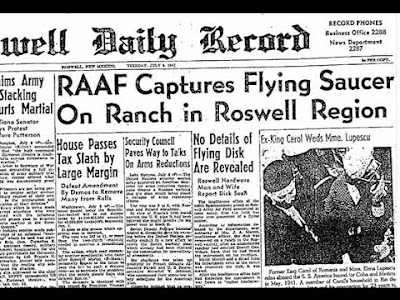 I love the stories as much as anyone, and have been fascinated by UFOs since I was a kid, but I am not ready to declare any of those stories to be the absolute truth. It is the skeptic in me. But I think putting a flying saucer (as we called those unidentified flying objects in those days) on a magazine cover was a guarantee of sales. So it was with Charlton’s Space Adventures #6 (1954), which promised to tell of the “first contact” between humans and aliens from another planet. It has an attractive cover drawn by Stan Campbell; just made for attention on the comic book rack: 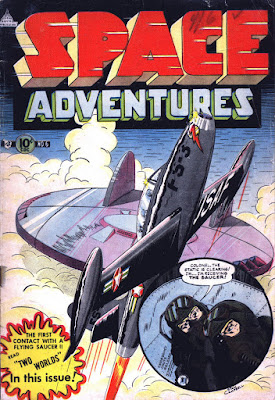 A young Dick Giordano, later both comic book artist and editor, in 1954 was about 21 years old by my reckoning. He did an excellent job with both pencils and inks on the story.

A major part of many legends surrounding UFOs is they are here for something we have on Earth: water, heavy metals, some people for medical exams...and this story says the well-spoken alien who talks to the two pilots is after something, also. And because we are humans and we like invasion stories, [oops! spoiler alert!] so the story ends just about the point where the 1962 gum cards, Mars Attacks! begin.*

As a final note, I do not know why the blue alien suddenly becomes comic book caucasian on the last page. A mistake by the colorist? A clever alien disguise? 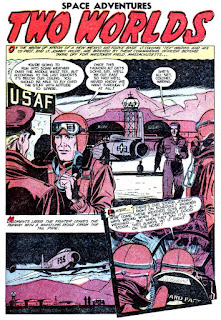 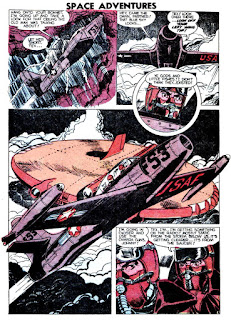 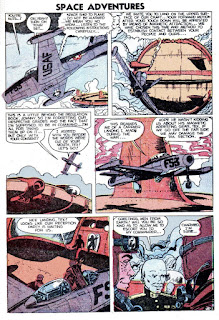 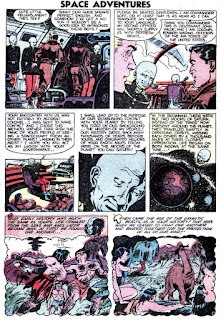 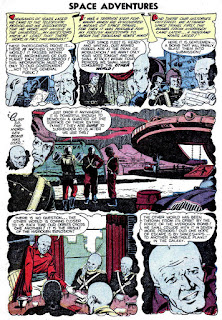 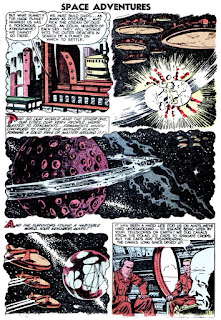 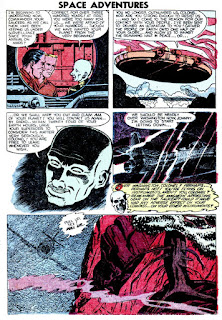 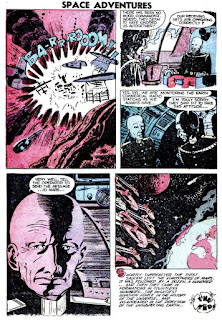 *Click on the thumbnail to see the set of Mars Attacks! cards presented by Hairy Green Eyeball: 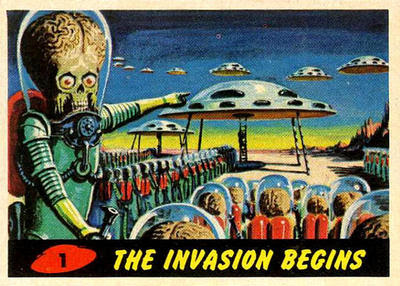 Well it would've been only a matter of time before the technologically advanced aliens would've found reasons to appropriate the other half of Earth anyway. Might as well just tear the band-aid off and exterminate humans in one fell swoop. I mean Europeans were more than happy to share the land with Native Americans in the beginning. Look how that worked out.

Of course it's also possible humans would've saved the aliens from the dirty work. Hard to imagine what would happen if all humans were forced to live together on half the planet. Hard enough not killing each other as it is.

Been behind on Pappy's!

This is another sci-fi story that hinges on the fact that the aliens don't seem to give a care about validating anything. No signal doesn't mean the answer is "no", it means no signal! You think they'd have figured that out at this point! And they've been observing but somehow missed the jet crashing? Was it time for an observing person switch???

Also, I've seen the "we got space travel before bombs" plot bit before, of which I can no longer suspend disbelief!

Beautiful art on this. Nice craft.

Well, at least when Mars Attacked!, we blew their planet to bits!

(Too bad that many of those bits subsequently rained down upon the Earth, ultimately destroying even the microbial life.)

What I note about the story at hand is that the aliens reveal themselves to just two individuals, who would very likely have been disbelieved had they filed a report, that aliens lack (or simply do not use) a technology to monitor the aircraft after it departs, and that the pilot and co-pilot do not begin reporting by radio.

The land-mass of the Earth isn't distributed as many people imagine it to be. Either some continents would be shared, or one of the populations would be allocated far less territory than were the other. And I would guess that technological and infrastructural considerations would have argued for leaving the populations of India and of China in place. In any case, a smooth transition would have been out of the question, and I figure that many tens of millions of people would have died had the Earth population complied.

Guys, the message I get from all stories that are similar to this (the aliens want something we on Earth have) is human beings projecting that all who come uninvited are invading. Aliens from space are hostile in science fiction, and have been since the genre was created.

I am amused watching all of those UFO documentaries on Amazon Prime (there are a bunch of them), and none of them convince me of anything, but if I believed that aliens from other planets were visiting our planet and have been doing it for over 70 years, then their plot(s) against us must be super secret, no blowing up the White House or ray blasting humans to death so far, anyway.

Just because I sleep under my bed, and have my Buck Rogers ray gun handy doesn't make me paranoid, don't you know.