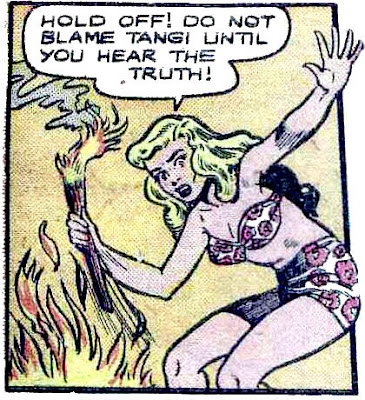 Since I am unfamiliar with the character, Tangi, who is yet another jungle girl in an abbreviated costume, I refer you to the Public Domain Super Heroes website:

“Tangi was a white Jungle Girl who lived in a village with other humans, including her friends Cheela and Tangoh. She rode zebras on long distance trips and could communicate fairly effectively with her primate friends, Ongah, the gorilla and Chitchee the monkey. On her own, she was a good swimmer and athlete, and knowledgeable about the jungle and its inhabitants. She carried a knife and proved that she could kill a panther with it. However, she apparently had a code against brutality and killing humans unless it was absolutely necessary. She worshiped at the sacred graveyard of her ancestors at Takhor, far from her village. She knew how to perform ritualistic dances to bring rain to her people.”

And when I say abbreviated costume, I mean it. I like Tangi’s footgear, also. Artwork is from the Iger shop, and is at least partially done by Jack Kamen.

I can’t vouch for any of the factoids in the endpiece, “The Arabian.” I am no fan of tattoos, but I am intrigued by ladies having their legs tattooed to look like hosiery. Maybe I could get a pair of black socks tattooed on my feet. No more having socks go missing! 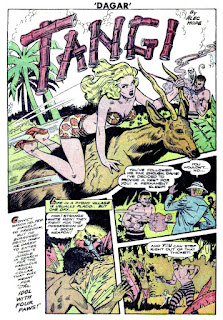 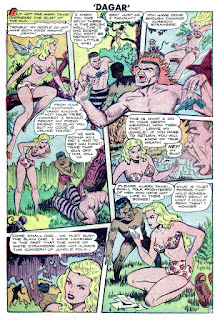 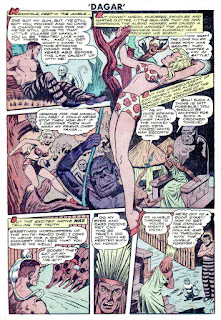 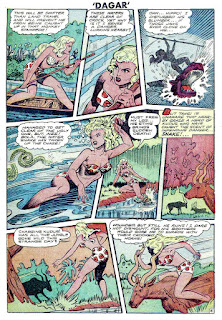 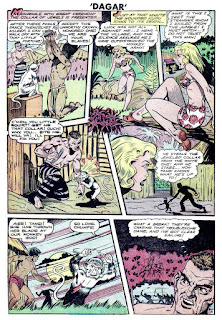 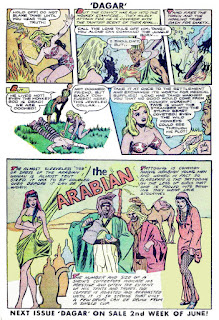 Tangi's costume appears to have been a '40s-style bikini with red mules. I'm glad that she wore shoes, as I don't find much appeal in the idea of feet with leathery and callused soles. If I were drawing a jungle girl, her costume might be nothing more than protective footwear. (If she wore boots, then the mandatory knife could be a boot dagger.) But I have to wonder how those mules stayed on Tangi's feet.

I've seen many jungle-hero stories which were padded with random confrontations with wild beasts unrelated to the central plot, but such confrontations seem to constitute a greater share of this story than of any other that I've seen. Moreover, Tangi has little agency in that central plot; if she were somehow removed from the story, the only changes to the arc of the villain would be that he would have killed the pygmy who appeared on the first two pages, and that the villain's corpse would have been more mutilated by the monkeys.

I don't know why the Iger studio seems always to have closed its stories with a little sign drawn like a crude cloud with “The End” in script.

What the filler calls a “thob” would be better transliterated with “thawb”; the use of this word for the garments of women has fallen from favor, and is now largely reserved for the garments of men. Some Arabic women's garments do involve a great deal of fabric, but that has never been universal amongst Arab women. Genuine tattoos are widely regarded as sinful by Muslims, and are therefore uncommon amongst Arabs, though al Qur'an is silent on the matter; what is widely practiced by Arabs (amongst other people) is painting of the skin with henna. Arab coffee is not so dire as claimed in the filler.; instead, Arab coffee is essentially the same as Turkish coffee. (Good stuff!)

I'm trying to recognize the Kamen in there, and I think I see it in a couple figures. Kamen was one of the better good girl artist at the time, and continued it on throughout EC though much of his "good girls" where throwing people off of balconies in suspense stories!

This one was ... oddly written. The exciting parts -- the hippo, snake, and stampede, got 3 panels of basically no action. They knew better in the late 40s!

Can we have on criminal that's nice to animals? Is it that hard?

I don't know about the tattoos, but wikipedia renders the article of clothing as "toob". It's listed as the national dress for Sudan. A web search reveals it is a 15-foot-long piece of cotton fabric.

What is it about her footwear that is so interesting?

Darci, Daniel tells his opinions about the footwear in his comments, and doesn't think they would do the job, but really, all I meant was Tangi wore some sort of protection for her feet. The other jungle girls went around barefoot, which I thought was an invitation to thorns, cuts, infection...ugh. Not to mention that those skimpily-dressed jungle women were so exposed they would have scratches and lacerations all over themselves.

Daniel, Nyoka the Jungle Girl wore boots. She also wore shorts, but with a long-sleeved blouse. I am probably prejudiced toward the less-dressed because I am still an adolescent when it comes to things like that.

My posting (Number 2285, from January of this year) included this line: "While others like Sheena and Lorna and Rulah wore as little as possible in jungle attire, Nyoka went the other way. She dressed sensibly. I can tell the boots she wears, rather than going barefoot, would make walking on the jungle floor much easier on the feet."

What I left out is the mosquito factor in stories with half-dressed jungle women...so many mosquitoes, so much skin. (I saw a documentary recently that claimed the most prodigious killers in the history of the world are mosquitoes.)

Brian, all of that fighting dangerous animals and vanquishing them with knives is more fantasy than reality, but in those days it probably wasn't important to enough people that people are killing off other species.

My example is the 19th century book, King Solomon's Mines, where members of the hunting party would just kill a bunch of giraffes or elephants for the "sport" of it.