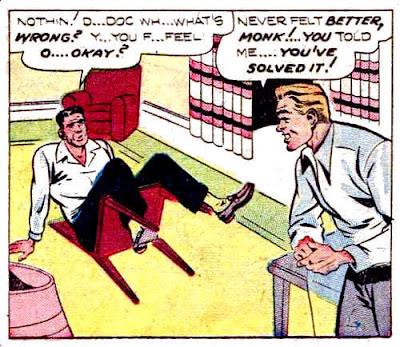 When they came out in the 1960s I read many of the Doc Savage series of paperback reprints from the original pulp magazine novels. Doc was strictly human, but he had superhero-style attributes: smarter, stronger, tougher than his enemies. He had a group of guys who went along on most of his adventures, but later in the series the gang shrank to its two core members, Monk and Ham. I had never read any of the comic book stories published by the original Doc publisher, Street and Smith, although I remember picking up and reading some of the comic book versions published in the '70s. 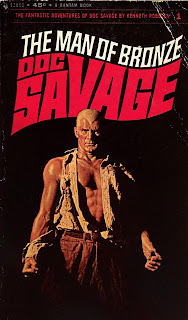 Like most of the readers who came along with the Bantam paperbacks, I was used to seeing Doc as artist James Bama pictured him, in a torn khaki shirt and hair with a widow’s peak. This 1948 comic book version goes along with the original conception of Doc as readers saw him in the 1930s. 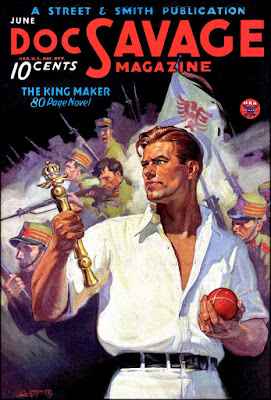 By the time “Television Peril” was published in 1948 Doc had about reached the end of his original pulp run, which ended in 1949. The story has a science fiction premise of a wannabe dictator using television as a means of transporting an army through TV sets. Television has a lot of power, and at times can be considered to do about as much damage as having enemy soldiers trooping through the set and into your living room.

In the story Doc’s retinue has shrunk down to Monk only. A redeeming feature of the story is that Bob Powell did the artwork. 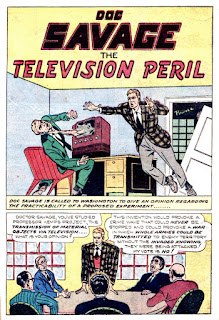 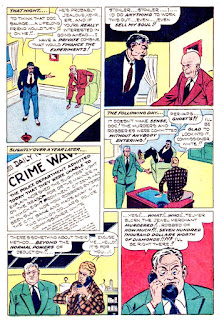 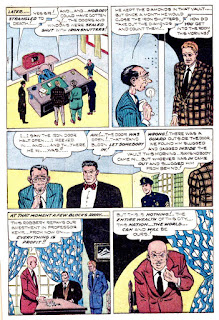 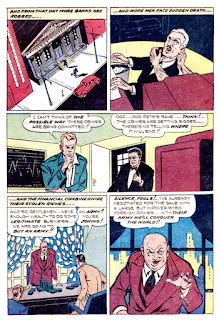 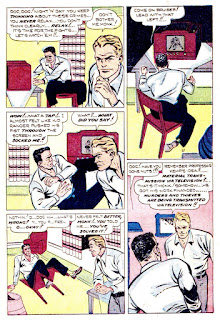 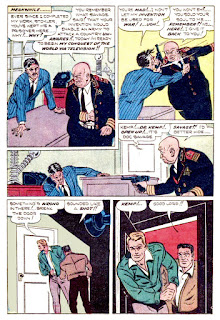 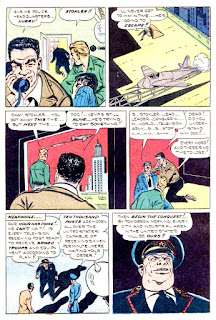 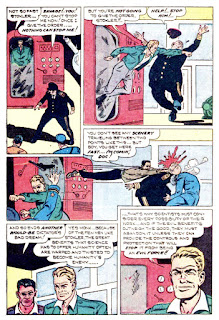 Having seen many covers by Bama, I was a bit surprised when I first saw a reproduction of one of the pulp covers. But part of what surprised me was that the text had repeatedly described Savage's hair as close-cropped and having something of the appearance of a skull-cap; in that regard, Bama was faithful to the text whereas the earlier covers had not been.

I never cared for the characters of Monk and Ham. (Even Grag and Otho were more appealing.) I was especially put-off by the supposedly humorous origin of the name “Ham”. (Did Lester Dent actually have a sense of humor?) But the rest of Savage's team was almost perfectly forgettable, with exception of a character introduced long enough to be driven mad by torture and thence to become a homicidal, vigilante adversary of Savage.

Rather obviously, in this story Savage is quite slow on the uptake; had I believed that television sets were capable of matter transmission, I would have been suspicious of them ever thereafter. And I don't know how Savage imagined that no one would fund research if those whom he advised did not. (“Let's keep ourselves disarmed, gentlemen!”)

What's really missing, though, is a final panel in which Savage is having the villains transported to upstate New York.

Daniel, the Shadow also had a group of people who worked at helping him, at least from what I remember of the earlier stories. Doc's associates may have been a requirement from the editors, for some unknown reason. It never advanced the stories having a whole gaggle of hangers-on following Doc, but Monk and Ham were friends Doc could talk to, at least. I disliked them, also, thinking the premise behind their names was frankly stupid. But then, the stories were written in the 1930s, so maybe buddies with corny nicknames were more acceptable palling around with heroes. I can see why most comic book superheroes are either solo or have one partner: in prose you can have a sentence that says, "Forty fully-armed men suddenly converged on Doc!" but that would be near impossible to put in one panel of a comic book.

I don't know whether Lester Dent had a sense of humor or not. I don't remember laughing at any funny situation in a Doc Savage story, since they seemed fairly serious to me, even if the plots were off-the-wall.