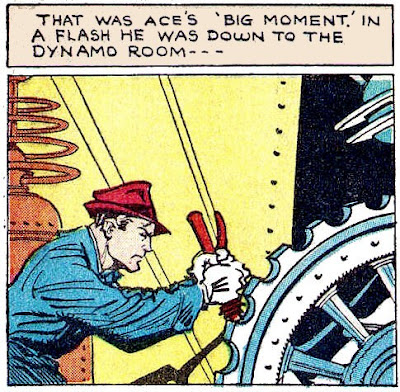 Jack Farr will be added to my list of comic book cartoonists who were born in the late 19th century and began their careers in the early years of the 20th. If I ever get around to compiling the list, that is.

Farr was born in 1889, and his death date is not known, but is usually assumed to be circa 1948. He did several features for several comic book publishers during the late ‘30s and ‘40s. His stories are easily spotted because he did his own lettering, and his display lettering for his titles is easily recognizable. His works, usually filler material, were mostly comedic, harking back to his time as a gag cartoonist in the ‘20s. Today’s story, “‘Ace’ Brady, Super-sleuth,” is done in a more conventional adventure hero style…but in this case looks like something from the generation before comic books. It is from Dell’s Popular Comics #49 (1940). 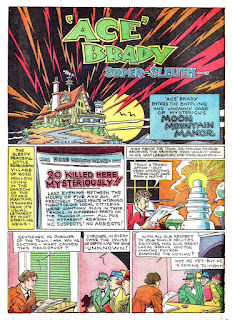 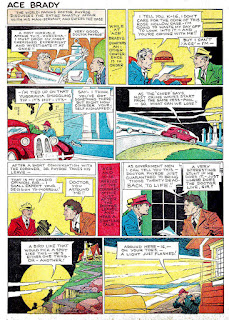 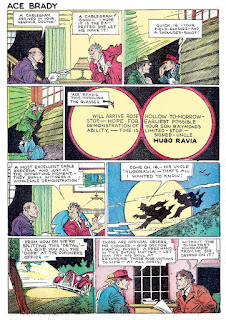 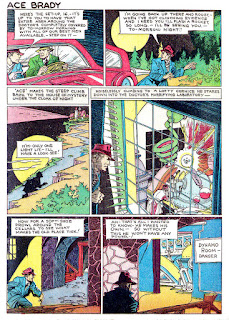 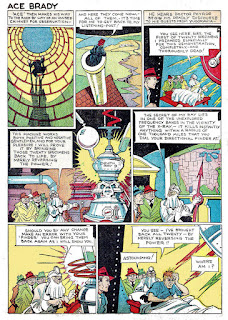 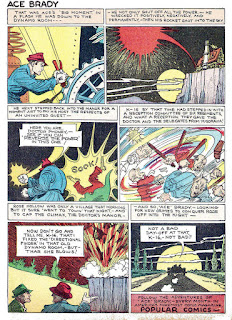 Well, unless Brady killed Phyroe, not a great deal was accomplished in destroying his manor and death ray. (For some reason, the popular fiction of that era often assumed that scientific and technological ideas would be lost if every physical instantiation were destroyed.) Personally, I'd like to have one such device to reverse the effects of the use by anyone else of another such device.

What I'd love to see would be a collection of sample work by each of those comic-book artists born in the 19th Century. Based upon my limited exposure, I think that the work would have features shared across much of the cohort and distinguishing their work from that of younger artists — that it conformed to what had been a fashion that was by that time old.

The script doesn't seem written to be comedic, but Farr's slick visual style is over-the-top in a way that approaches the satiric.

More than a little Will Gould influence here.

Yeah, that's really old fashioned, in both art and story telling, but there was certainly a lot of really stilted art in the early 40s.

I like parts of the story but, like a lot of 40s comic, it wraps up the minute it starts getting interesting. There's so much to explore in this death/life machine but what the hell, punch everybody and blow it up!

The artist was great at architecture. The splash is really good.

Sounds odd but I see slight touches of Winsor McKay's Little Nemo in some panels. Great to look at, thanks for your blog.