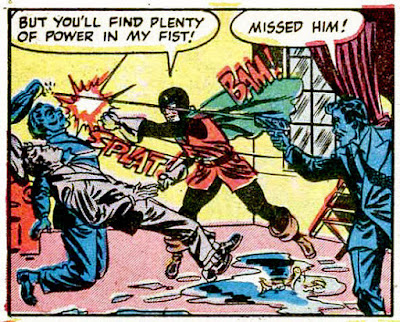 Dr Mid-Nite, the secret identity of blind Dr Charles McNider, was a stable, if second tier superhero, for DC Comics from 1941 to 1948. His Wikipedia entry claims he was the first superhero to have a physical impairment. He pre-dated Marvel’s Daredevil by a couple of decades. His first appearance was in All-American Comics #25 (1941), his origin told by creators Chuck Rozenstein and Stan Aschmeier, who signed his work Stan Asch.

Once again, as we showed with Green Lantern a few weeks ago (Pappy’s Number 2180), the hero disappeared after a final appearance in All-American Comics #102 (1948). The only warnings to the reader were replacing Green Lantern on the cover with the Western star, Johnny Thunder, and an announcement on the bottom of the one of the pages to watch for all new adventures of Johnny Thunder in the new All-American Western.

The decision to replace the superhero contents of All-American with cowboys probably disappointed those superhero fans still left, but such is the nature of the business. The characters served their purpose, but when they no longer sold other genres were tried.

No scripter is listed by the Grand Comics Database for this final Dr Mid-Nite story, but the artwork is credited to Arthur Peddy and Bernard Sachs. 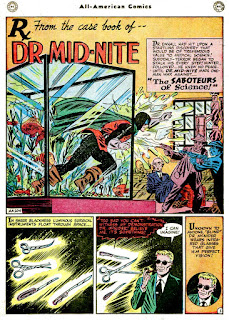 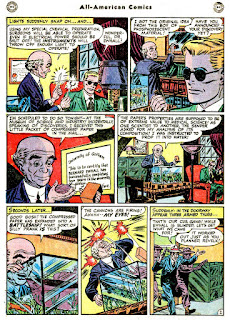 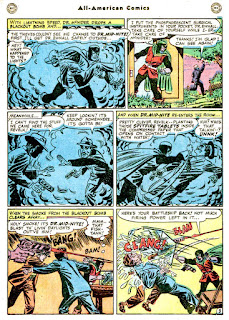 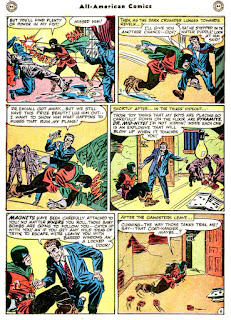 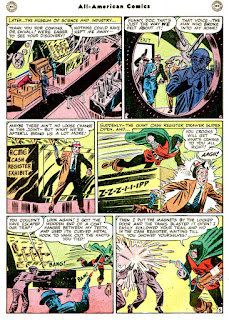 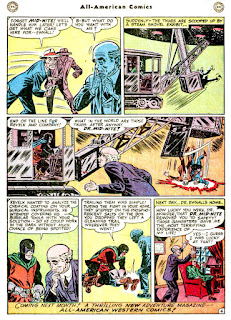 Glowing surgical instruments really wouldn't be of that much help. If they glowed enough to illuminated the patient, then working with them would be like staring at light bulbs. If they didn't illuminate the patient, then the surgeon would know where he or she were cutting, but not what.

And it seems quite insensitive for Ewhall to effect a demonstration when he were already presumably familiar with the properties of his invention, and the only audience was a man whom Ewhall thought blind.

It doesn't seem plausible that the villains would have so much phosphorescent salt on their shoes that they might be traced from where they left Dr Mid-Nite to the museum, and it would be surprising had the distance been such that they walked. There'd not be much gimmick in Dr Mid-Nite going to where he expected Dr Ewhall and hence Revelk to be; but it would make for a more plausible story.

Giant, working props, such as that cash register, were of course a signature device of Bill Finger; but also of course some other writer could have imitated that practice.

Roy Thomas has told the heartbreaking story of having subscribed to "All Star Comics" (in order to follow his beloved Justice Society) only to have the title become "All Star Western" one issue later with no warning. This is how a Golden Age dies. It must be difficult for modern fans to imagine a time when readers didn't know in advance what would be on the racks next week.

Daniel [oeconomist.com], as far as gimmicks went, the giant props were good. I don't think Bill Finger had staked a claim for them. Editor Julius Schwartz could have told one of his stable of writers to include them, or else Finger did some scripting for Schwartz, also.

Daniel, thanks for confirming my sometimes leaky memory. I remember the reminiscence of Thomas about All Star Comics. It came to mind while I was writing the post, but I did not put it in because I couldn't remember where I read it!