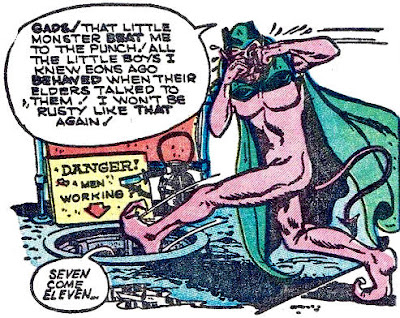 EH! was another Mad imitation, published by Charlton, from the early '50s. The indicia reads “Designed by Al Fago Studios,” so we know to whom we can assign the blame. When I first read “Paradise Gained” I had some hope for it based on the Dick Ayers artwork, but after a couple of pages hope died. I wonder — rhetorically, since I don’t believe anyone is still alive to answer my question — if it was designed by someone who used other Mad imitators as a guide, rather than Mad itself?

In the story you see Satan in a department store. You see Satan is very popular with women. You see Satan appears to be nude under his cloak and cowl, yet without genitalia (page 5). Make of that what you will. 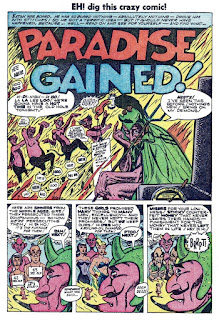 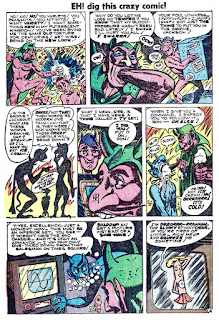 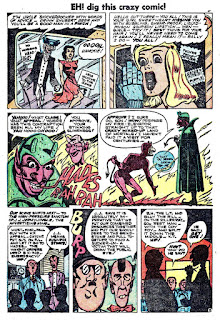 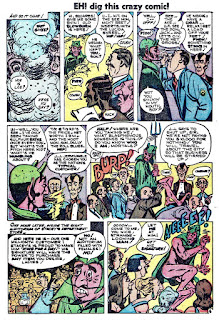 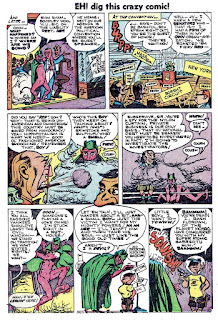 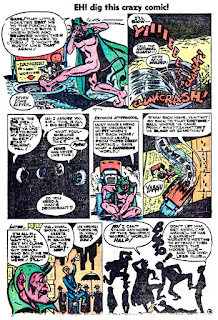 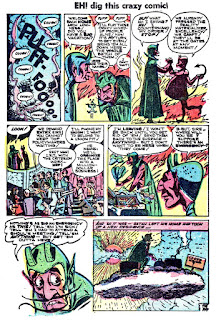 Honestly, accents or overly colorful language (1) never ages well and (2) just makes these stories a chore to read. Don't do it, comic writers!

I don't usually make "political correctness" references, but the idea of those women appearing in hell because they "didn't keep their promises to men" wouldn't go over very well now. (Maybe it didn't even go over well with everyone THEN.)

Brian, my mother used to say about comedy, "It's easier to make someone cry than make them laugh," which is why there is another saying, "Dying is easy, comedy is hard."

Most "funny" comic books are anything but, and this is no exception. Still, there is something to be said for making an effort, even if one totally misses it. '

I agree about dialect and jive talk. In a few decades from now I wonder how people will view comics of the late sixties, early seventies, with simulated hip talk (50-year-old writers trying to recreate slang used by teens and/or hippies).

Mrs Pappy and I were talking just yesterday about how people used to say "man" to everyone, male or female, and my favorite word, "bummer," is no longer heard. I say, that's a bummer, man.

Grant, I must've missed a Mexican movie about Santa Claus. The mind boggles. It seems wrong, somehow, like us Anglo-types celebrating the Day of the Dead because the imagery is cool (but I digress).

I'll want a whole lot of ice cream if I end up in hell.

It's become a real cult film in this country, including being a famous MST3K episode. So it would be easy to find.