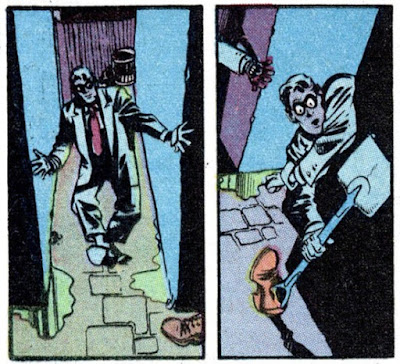 Postwar was a time of cynicism and concern about atom bombs, about the Russians (hmm, we’re still thinking about them today!) and about comic books leading children into a life of crime. Thank goodness they could show crime stories in the Sunday newspaper funnies. One assumes that if kids were reading crime comic books then they were probably reading “Dick Tracy,” and if they got it in their town, “The Spirit.”

Chester Gould used a lot of black in “Dick Tracy.” He also used sadism and torture. The violence might have driven some people to read Dick Tracy for the forbidden thrills. Pulp magazines were full of the same thing, but presumably not available to youngsters. Today’s posting, a Spirit Section from August 24, 1947, calls to mind the more gruesome of Dick Tracy’s adventures, and one-ups Gould. Eisner shows a bloodied crook, tied up, then shot in the head by the Octopus. Since I have been re-reading Dick Tracy lately, I’m showing a page from The Celebrated Cases of Dick Tracy, where we see a torture device set up by the Brow, then used on a young girl. Both the sequence from Dick Tracy and the bloody killing from The Spirit might have been more than a concerned parent would have wanted a young child to see. 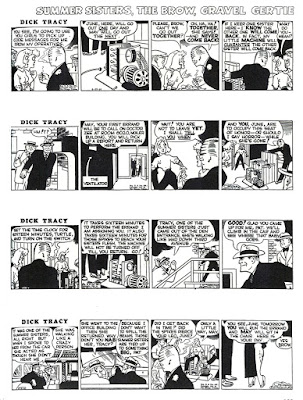 But, I am not a young child and after all we’ve been together with crime comic book stories I assume you are also mature enough to look at this sort of thing.

Something else about this Spirit episode: It one-ups Gould in its use of black ink. It sets a perfect noirish mood.

The Grand Comics Database credits Will Eisner for the script and the artwork, except where Jerry Grandenetti drew backgrounds. 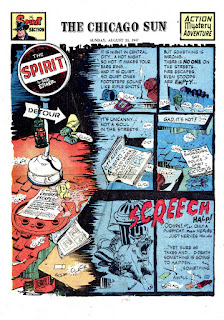 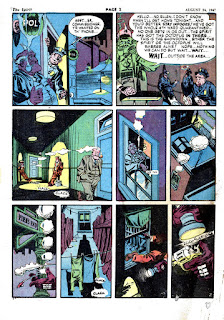 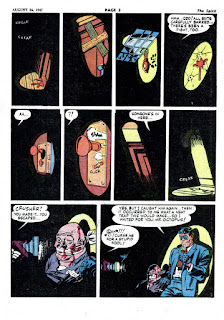 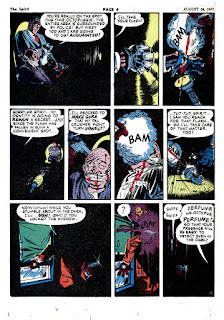 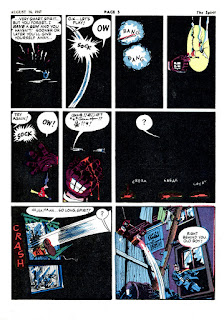 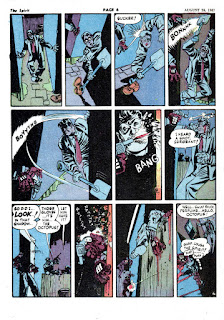 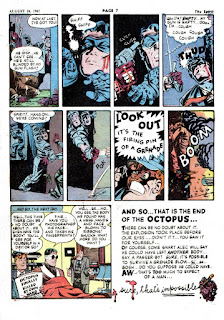 Email ThisBlogThis!Share to TwitterShare to FacebookShare to Pinterest
Labels: Dick Tracy, Jerry Grandenetti, The Brow, The Spirit, Will Eisner

Love the "Shucks, what more do you want?" at the end.

In a comic-book or comic-strip panel of an unlit room, one typically gets just sound effects and dialogue. In this story, three panels (5:2, 5:3, and 5:7) are essentially that, but Eisner has sources of limited light in most panels, twice introducing a new source as an old source is extinguished. The darkness isn't used as a cheat.

(If we're invoking Gould, then we might think of The Invisible Tribe, a strip-within-the-strip in which nothing were drawn.)

There's a violation of procedural rights in the Spirit's reduction of Crusher to a badger in a bag.

It would be very remarkable for a hand grenade to obliterate all means by which a corpse could have been identified in 1947. Perhaps of greater concern, Our Hero wasn't very heroic if the Octopus escaped as a matter of routine.

Daniel, like the Joker escaped Batman and/or Arkham Asylum?

Kirk, well, for one thing a fingertip with a fingerprint still intact? It seems Commissioner Dolan gave up a bit too easily.

We've seen others overcome an invisible opponent by splashing them with paint, but perfume is a new one (at least to me). Odd that it never showed up in the Phantom Lady feature.
Thanks!