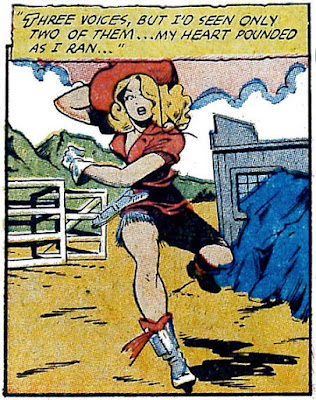 Whoa there, Hoss! I read this six-page story for Cowgirl Romances #10 (1952), only to be kicked by a horse (figuratively, that is) by the ending. It is not what I expect from a love comic.

Checking it with the Grand Comics Database I see it is a reworked filler strip for Fiction House’s Movie Comics #4, originally published in 1947. In the original version, “Mitzi in Hollywood,” the heroine is a movie extra; in the rewritten version she lives on a ranch where a movie is being filmed. In both versions she has a crush on a cowboy movie star.

I guess it would be cheaper for the publisher to have a story — especially one drawn by the great Matt Baker — rewritten than have another artist illustrate a brand new story that follows the usual love comics pattern of girl winning boy in the end. But I ask why they would go to the trouble? They could have just shown the original “Mitzi” story and no one would have cared. As it is, either version is entertaining, and Baker’s work drawing a beautiful girl in cowboy gear makes up for the story’s shortcomings. 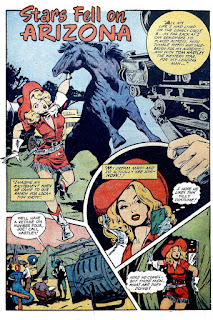 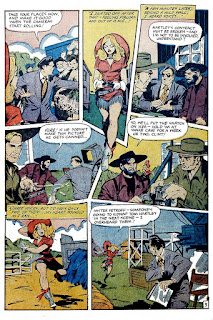 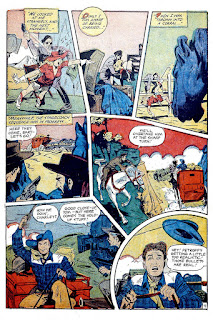 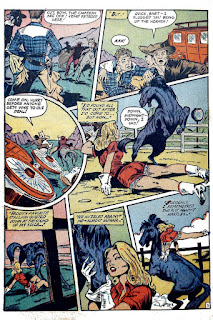 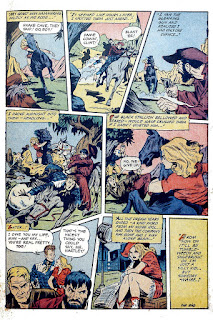 Decent art! Shades of the Iger Shop!
PS: As a request, how about some Wendy by Howie Post?

I'm glad this was a western because it gave me whiplash!

I got to the end, and then realized -- we never even learned that poor girl's name! This is worse than failing the Blechdel test.

Darci, just call her "Mitzi," her name in the original version from Movie Comics.

Speaking of names, the test is actually the Bechdel Test.