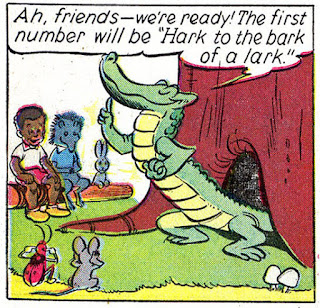 Bumbazine was the only human character to appear regularly in what eventually became the Pogo comic strip.* Pogo Possum, seen here in his second appearance, looked more like an opossum and less like the cuter and more marketable Pogo that came later. Like all good comic characters, Pogo and Albert the Alligator had a ways to go before their images matured under Kelly’s hand, and “Pogo” became a longtime hit in newspapers. That’s a whole other story.

In this early episode (the second) Bumbazine and Albert are the title characters. Albert tries to pull off lip-syncing in order to win a singing contest. (His own voice sounds like “Roo-oo-oof! Wuff! Yowp!” which sounds more like ol' Hound Dog, who had not yet become a character in the feature.) Bumbazine was later dropped from the strip. Including a human just did not fit into the swamp universe as Kelly later envisioned it. Also, it might have turned off some of the Southern newspapers in those segregation days. Another whole other story. 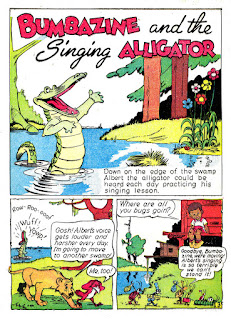 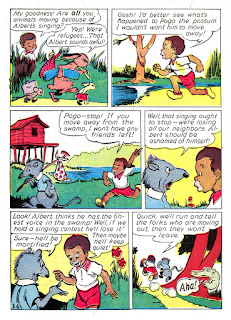 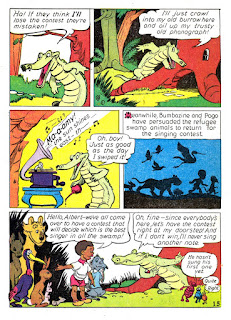 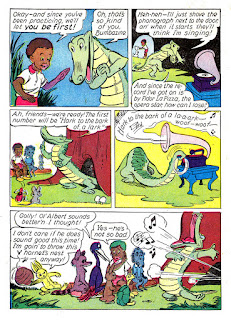 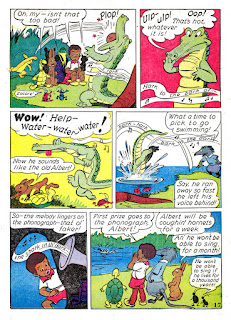 *However, Bumbazine was not the only human character to appear in an Albert the Alligator story. Here we have several. Just click on the thumbnail. 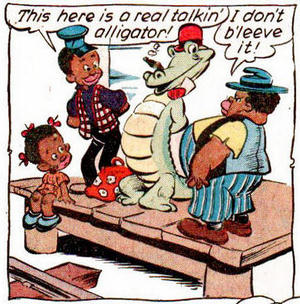 Hark to the snark: “He hasn't sung his first one yet.” That line got a laugh from me.

The thing that I enjoy most in Pogo is when madness erupts as one seemingly small bit of unreason touches-off a cascade. We see something of that in this story, with the lagomorph lobbing the hornet nest; but Kelly just wasn't there yet, as the attack is nearly ex nihilo, and the chaos is only momentary.

Had Bumbazine continued into the comic strip, no matter how Kelly had presented him, it would now be impossible to have public discussionsn of the strip without tirades and lectures about intersectionality. Let's be glad that the humans moved out of that swamp.

The wonderful dialogue the strip was noted for also had a way to go yet(forget comparisons to Al Capp or the various Snuffy Smif writers, Kelly was in a class with Mark Twain and Artemus Ward when it came to backwoods colloquialisms.)

Daniel, it was best to drop all humans out of the strip, so that the animals could play the parts of humans in the fifties when Kelly went through his McCarthy satire phase, and later when he parodied LBJ, etc.

Kirk, considering he grew up in Bridgeport, Connecticut, he did have an ear for other dialects.