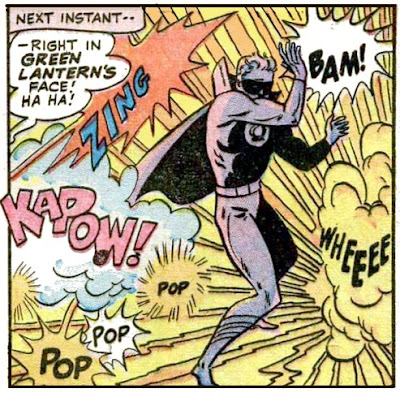 The great superhero glut of the early forties was fading out toward the end of the decade. Superman, Wonder Woman and Batman were cornerstones of DC Comics and still selling well, so they were exempt from cancellation, but the others...no such luck. All-American Comics #102 (1948), had the last appearance of Green Lantern, who had been on the covers of the book for years. Green Lantern’s own title lasted a few more months, into 1949, but its final issue, #38, did not even have GL on the cover.

Green Lantern had company in the unemployment office: he was there with All-American co-features Dr Mid-Nite and the Black Pirate. The next issue was titled All-American Western, as cowboys took over.

For the record, I dislike comedy relief characters, especially when there is no real comedy. Doiby Dickles is Green Lantern’s pal, and all I can say about him is at least he wasn’t an underage boy like those hanging out with many other superheroes.

The Silver Age Green Lantern appeared in 1959, also written by John Broome, who has the writing credits for this story. Irwin Hasen (note the “Hotel Irwin” sign on page 6) did the pencilling, and Bob Oksner did the inking. 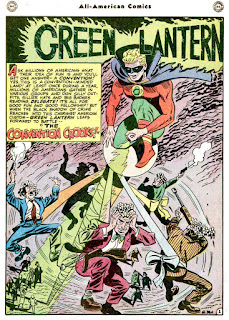 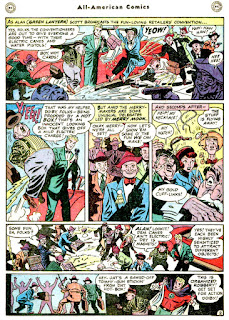 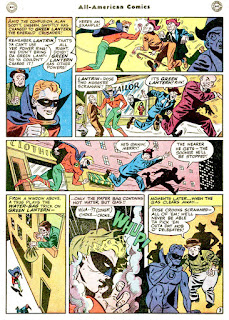 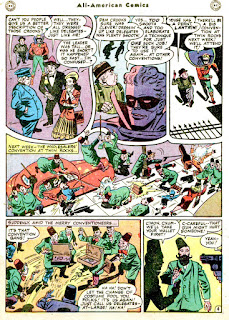 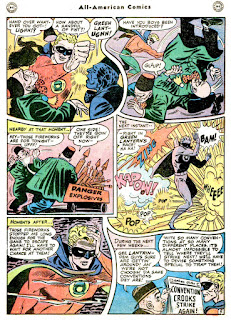 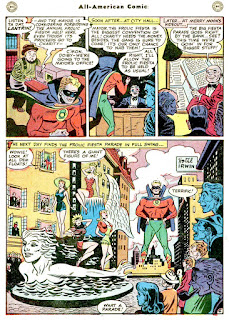 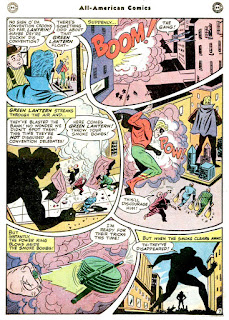 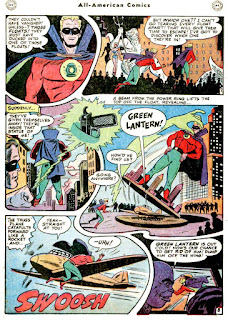 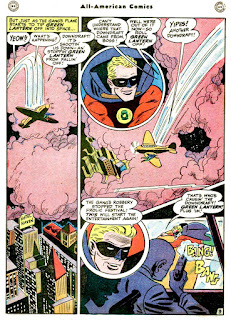 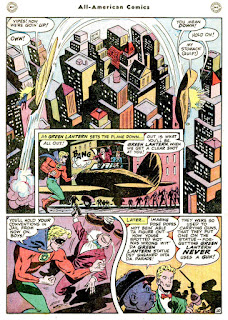 Outstanding post. Few people seem to remember that the illustrator of "Dondi" in the Sunday funnies, also drew Green Lantern occasionally during the Golden Age. I really like the art of Jon Chester Kozlak, though.

GL was my favorite of all the characters with special powers (Prince Ibis was a close second) during the 1940s. I first learned about Mt. Everest in a GL story...see comics COULD be educational! Fifty+ years later I found the story in an issue of Comics Cavalcade at one of the on-line comic book sites.

Only one use of the power ring? No wonder this comic got cancelled!

Pappy, do you have any of the couple later Rex the Wonder Dog stories? I've seen them referenced but never actually seen one.

Huh, not a great finish for the Lantern. Even a couple of the unpublished tales that DC later printed were better. Funny about the conclusion. I wonder if that was the first time someone made a thing about GL not carrying a gun, which later became a big trope in Batman's mythos.

The story makes much of the fun-and-games of conventions, but I didn't think Broome ever specified what kind of convention it was, except for "retailers." Does that mean that it was a convention for employees of big department stores? I've only heard of conventions devoted to specific professions in those days, like plumbers (I think).

Thanks as usual for a good selection.

I don't like the comedy-relief characters either, but it's interesting to consider why they were there.

Part of the explanation lies in thoughtless imitation, and part in the inability of a very great many people — including some who wrote or editted comic books — to recognize that they have no gift for comedy. (G_d save us from writers who laugh their ways through the construction of a scene! People who really understand comedy are seldom amused during their own creation of it!)

But I think that the principal explanation is that comedic side-kicks provided cover. They became most wide-spread after the first wave of comic-book censorship. They were there so that publishers could point to them and say “See? This is just light-hearted fantasy!”

Indeed, there is nothing funny about Doiby Dickles. He probably couldn't even draw a laugh with another ‘s’. But he made it impossible to take the Green Lantern too seriously.

What writers with real talent and motivation would have done, though, would have been to use the Harlequin always to keep the mood light in the Green Lantern stories. There was enormous potential for romance and for screwball comedy there.

Speaking of page six & the Hotel Irwin, do you think the three profiles bottom panel right are of the artists, writer, or maybe the editor? Especially the one on the bottom w/ the pipe & glasses.

Come now Pappy! Woozie Winks with Plastic Man must surely be the exception to your rule about comedic sidekicks not being enjoyable???

M. Bouffant, I don't know what John Broome and Irwin Hasen looked like in 1948, but the gnone of them look like the photos of editor Julius Schwartz I have seen. You have a good eye, though...they could be friends or coworkers of the artist(s).

Charlie Horse, you make a good point. Plastic Man and Woozy Winks basically rewrite the rule books for superheroes, anyway, but in this instance no, I wasn't thinking of Woozy.

Daniel, weren't comedy sidekicks the thing in movies, radio, comic strips and comic books? Funny or not, they showed up a lot, and their function was comic relief. The absolutely awful "Pieface" was apparently some sort of comic relief in the early issues of the Silver Age Green Lantern. I haven't read those issues since they came out in the early sixties, but my impression is that not only was Pieface not funny, but he was probably racist (Eskimo).

Fortunately our country is no longer racist... as far as comic sidekicks. That being said, Chuck nee Chop Chop of Blackhawk was superfluous when no longer humorous. Imho.

Actually, my father disliked Woozy Winks. And Cole seemed determined to overload Midnight with side-kicks; whatever might be said for Gabby and for Doc Wackey, Sniffer Snoop and Hotfoot are pure dead weight.

Certainly comedy sidekicks were a thing in movies, but their relative significance across movies featuring heroic characters was not as great as in comic books. And, had movies somehow been made with the Spectre as originally conceived, I find it difficult to believe that he would have been saddled with a Percival Popp in the sequels.

Geez! I'd forgot about Pieface, and I'm not sure that I want to thank you for reminding me of him! As a young child, I could not understand his presence, nor how a grown man could be called by such a name.

"He probably couldn't even draw a laugh with another ‘s’."

Okay, I don't know if it just caught me off guard or what, but that totally cracked me up. Good one! Did you even laugh during your own creation of it, Daniel?

As to the conversation: I don't really like comedy relief. And honestly, I can't imagine needing it here. These heroic fantasy stories are designed to be pretty lightweight, after all. Otherwise, I think that all sidekicks (including these) can serve two narrative functions that we haven't mentioned yet. First, they allow for efficient exposition via dialog, often demonstrating the capability of the hero. And if this can be funny, well, more power to 'em. Second, sidekicks provide an audience reaction surrogate, like a laugh track in a sit-com, guiding reader response to the text. So, say, if the hero says something that is supposed to be very clever, the sidekick can be awed. If the hero is in danger, the sidekick can be terrified. If the hero meets a cute dame, the sidekick can be lovestruck. The reader knows what's supposed to be the effect of the narrative in these cases, even if the writer or artist fail to convince.

It is this surrogacy that I think prompted so many comics creators to write character sidekicks that were children.

"Irwin Hasen (note the “Hotel Irwin” sign on page 6) did the pencilling, and Bob Oksner did the inking."
Couple of decades later, Oksner would write Dondi for Hasen to draw.

No, at the time of writing that line, I was really just seeing it as an effective piece of comedic rhetoric. One thing that I liked and like about it is that it rewards the reader who is thinking.

It's excellent that you draw our attention to the story-telling functions of sidekicks. In fact, Bill Finger remarked that he liked the introduction of Robin, because it gave the Batman someone with whom to talk. It is actually a challenge for the writer to use sidekicks who are themselves wise and clever; the less that Holmes explains to Watson, the less that things are explained to the audience in this manner. One can give the reader access to the thoughts of the sidekick on top of those of the principal character, but of course that is not dialogue of the sort preferred by audiences.