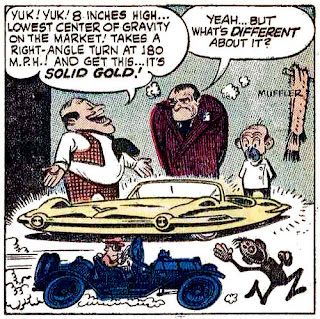 Russ Heath was one of Timely/Marvel/Atlas’ top artists. He drew most everything, including stories for the Atlas Mad imitations.

In the splash panel of “Big Wheels” Heath gives a nod to Harvey Kurtzman, creator and editor of Mad, by using a little character Harvey used in his “Hey Look!” filler pages for Stan Lee. 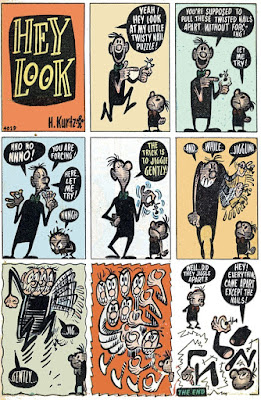 As for the story itself, it could have used some help from Kurtzman. It appears that either Heath or whomever wrote it tried to jam as many jokes into each panel as space allowed. That stuff worked in Mad, but it seems a bit strained here. (Hey look! It’s just my opinion.) You might find it very funny. Heath did one story for Kurtzman at Mad: “Plastic Sam,” where he just basically inked in the figures Kurtzman drew in his script. Kurtzman liked it. Long after Harvey and Mad parted company, Heath worked at times with Harvey and Will Elder on “Little Annie Fanny” for Playboy. 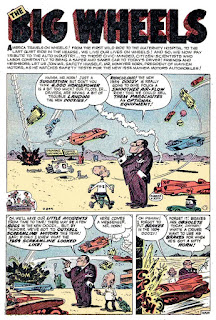 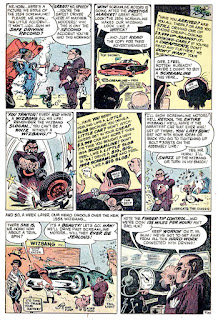 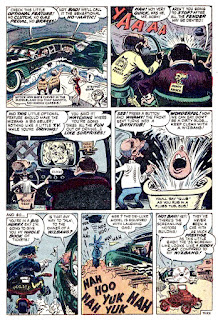 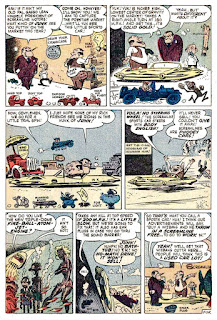 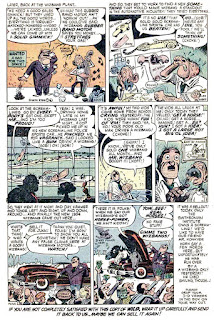 Kurtzman really new how to pace a joke, but he got a lot of help from his artists. Without Davis/Wood/Elder etc it wouldn't come off nearly as funny.

This little nugget has the same general structure as a MAD comic story, right up to the punch ending, and it's really Heath who sells it. I like it, but mostly because I learned to ignore all the little background jokes. Heck, I thought that stuff was getting tired by MAD 5 or so and really tired in Panic (which I actually liked a bit better than MAD.)

It's got some decent jokes but great comic art, which is where the real beauty lies.

The general idea is good; but the punchline is very weak; there needed to be more back-and-forth in the one-upsmanship; and, yes, the extra jokes in each panel are uninspired.

Brian, thanks for pointing out that the "art...is where the beauty lies." Comics are first of all a visual medium. What I say has been said before by others, but worth repeating: A bad story can be saved by good art, but a good story cannot be saved by bad art.

Daniel, when I first saw "Plastic Sam" I was a lad, and I was puzzled. At that time I had seen one issue of Plastic Man, the last one (#64) before Quality sold out to National (DC). I knew who Plastic Man was, but who was this Heath fellow? Him I did not know.

After associating Heath exclusively with war comics in the 1960s, I was surprised in the 1970s to see him
draw several hilarious stories for the National Lampoon. A big improvement over "Plastic Sam" (when I finally
noticed an unexpected signature on reprints), but with comedy that relied on the realistic deadpan of
Heath's artwork.

Never knew that Heath did this kind of comics work. I had seen him doing more serious stuff in the sixties. I certainly didn't know he drew for National Lampoon. I learn more good trivia from Pappy's blog. Thanks.