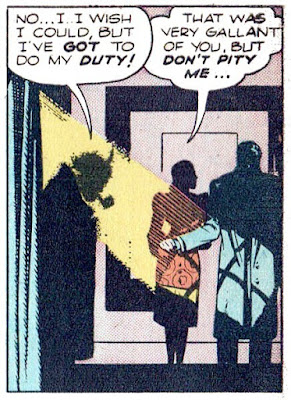 Years ago I read something that Will Eisner, or someone associated with him, said. He and some fellow artists went to the movie Citizen Kane several times to study it. I assume they were looking at camera angles and shadows and those things that could be used effectively in comic art. So when I read this Spirit story from the Spirit newspaper Comic Book Section, I thought this must be a result of those hours spent in a theater watching the work of Orson Welles. But this story was published on May 18, 1941, and it was usual for Sunday comics to be completed and in the hands of the engravers at least six weeks before printing. In this case probably sometime around the end of March, 1941. In checking I found out that Citizen Kane was released May 1, 1941.

It means this story, with some rich shadows and camera angles (a couple of those birds-eye views from the ceiling make the room look three stories tall), was apparently not influenced by the movie, but by Eisner’s own desire to vary his panels and add drama. I don’t know what Welles could have taught Eisner that he didn’t already know. 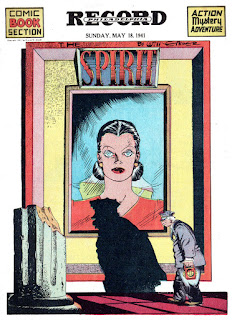 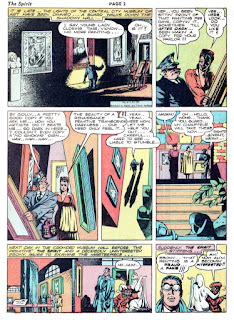 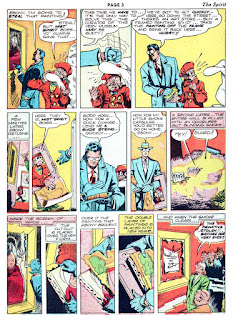 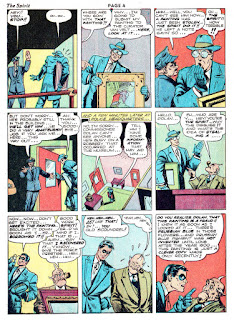 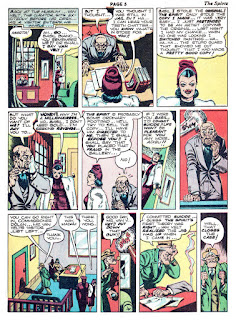 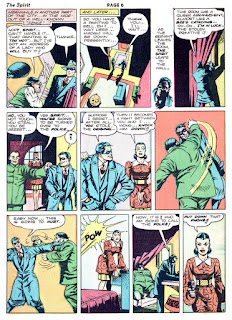 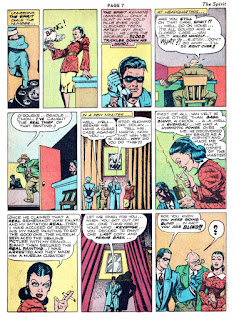 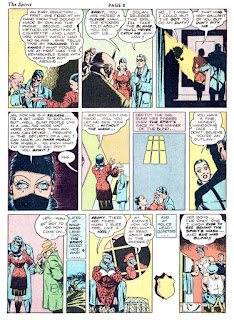 I read essentially that claim in Steranko's History of Comics. (And whomever Steranko quoted said that there were also dubious speculation that Welles had studied some comics or comic strips.)

In some cases, the best students are critics. By that, I don't mean that they sit in the back of the room and carp, but that, as they absorb what their teachers present, they also consider how it might be improved.

One can imagine Eisner watching Citizen Kane not simply with the hope of duplicating some of Welles' technique, but to consider how a scene might have been still better directed.

On the contrary, in later interviews Orson Welles claimed that HE was influenced by the comics. In particular the dark and moody panels of BATMAN. I think this was mentioned in Jules Pfieffer's book.
I don't know how true it was, but the KANE influence was very evident in most of Eisner's work on THE SPIRIT.
CITIZEN KANE's influence was also picked up by other artists....most of them from the Eisner-Iger shop like Lou Fine and Bob Fujitani.

A decent little story, not nearly Eisner's best but still heads above most folks at the time. He still took an awfully big chance with the whole "she's blind and will miss me" when he was like 5 feet away!

A nice splash, one of the great things Eisner brought to comics.

I think Steranko History of Comics tells that anecdote? Eisner was certainly genius and a rarity to comics. Citizen Kane... I think you have to be a movie critic to appreciate these days?

Outstanding example of Will Eisner's "cinematic" style. Eisner was possibly the greatest comic artist of the Golden Age. The depth and quality of his work is still impressive in 2018.

I guess I'll have to go down into my (shudder) basement and dig out my Steranko Histories. It's the second time they have been mentioned in the past couple of weeks, and maybe I can find stuff to steal...errrr, I mean quote.

Yep...I had noticed the influence on Steranko's work during the period when he was illustrating Nick Fury Agent of Shield. Steranko also reminded me of Bernard Krigstein, who drew for EC and many other comic houses.