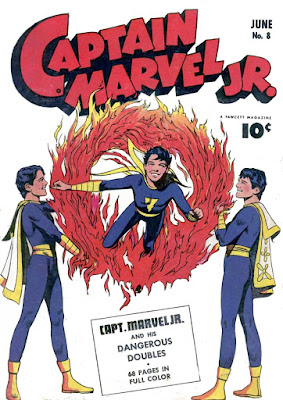 This 1943 Captain Marvel Jr tale reminds me of the 1996 comedy, Multiplicity, starring Michael Keaton, where multiple clones were made of the lead character. The Cap Jr story doesn’t use the word “clone,” but that word was in use in those days. It was taken from Greek in 1903 by plant physiologist Herbert J. Webber to “refer to the technique of of propagating new plants using cuttings, bulbs or buds.” (From NPR.org, and bless the Internet for providing the information.)

In the comic book story the cloning is done with a “cell divider,” a devilish contraption used by Nazi spies. As in the much later Multiplicity, it is mostly magic, since cloning doesn’t work like that. But in the comic book it is used to solve another problem for Cap Jr — that of being identified publicly as newsboy Freddie Freeman. It is like those Superman stories where Superman sends in a robot to fool the people who have figured out his secret identity. The result is the same for Cap Jr. Like Superman, there is chicanery, and Freddie protects his secret. 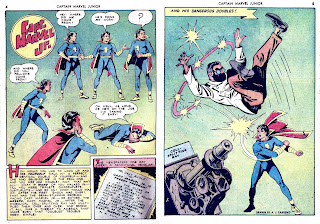 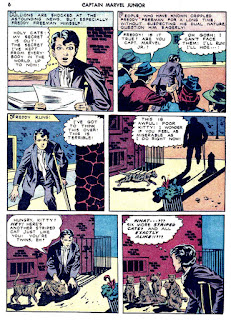 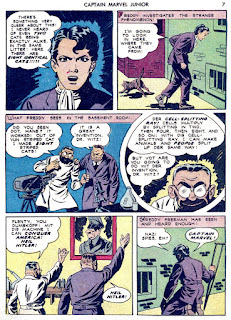 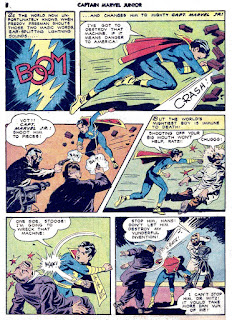 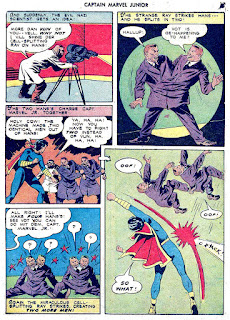 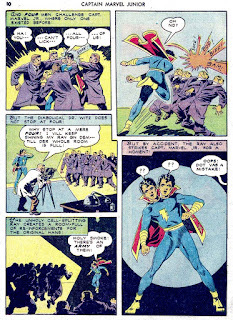 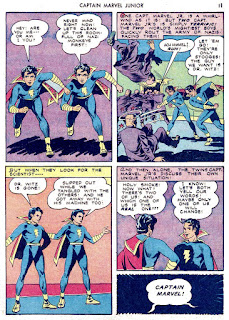 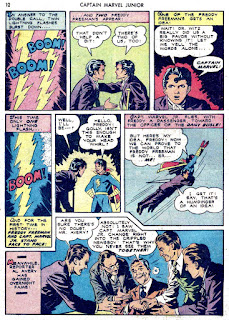 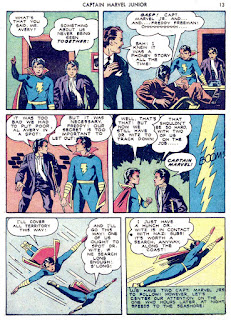 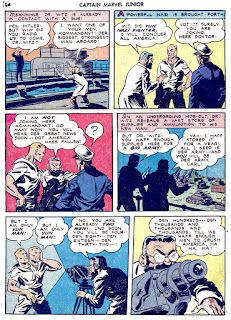 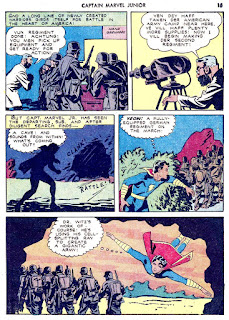 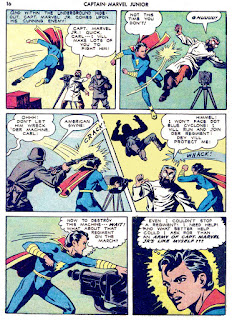 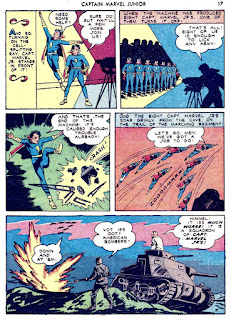 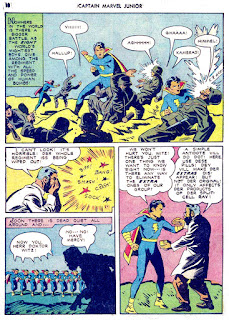 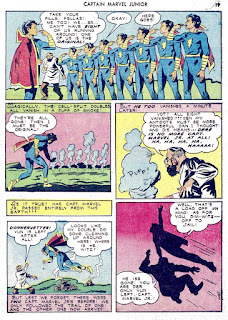 Hi Pappy - Great stuff! What I never understood about the Marvels is why Freddy and Mary looked exactly the same as kids and as heroes...even Clark Kent wore glasses to disguise himself!

One thing that is not properly acknowledged in the vast majority of stories about duplication is that people with ordinary psychologies will not actually think themselves the same person as the duplicates or as a master copy from whom they were made. Nor will they be the same person, as their personal histories will immediately have diverged. It would be like regarding a monozygotic twin as the same person.

I am especially struck by this point as idiots imagine uploading “themselves” to computers. Perhaps someday such duplication will be possible, but the source person will remain; he will not have been transferred to the computer. And, typically, he will not be content to die.

Assuming that Captain Marvel jr did not kill all of the duplicated Nazis is battle, giving them the pills would amount to killing prisoners of war.

Smashing the machine was simply stupid. A variety of constructive uses could have been found for it; plus, presumably, the inventor could always create another.

All that aside, this story is very light-weight, but fun; which one must imagine as the intention. It would have fared better with slicker art.

I remember one of the reasons we had so many zombie movies back in the 40s was the casting agents could fill those roles with men who couldn't pass the physical for the armed services. They must have done the same thing with reporters on Earth-S, otherwise how could Freddy run away from that gaggle of reporters?

That cell-splitting looks painful!
Thanks!

Brad S., I have never known why Jr and Mary didn't become adults like Captain Marvel. That was a great kid's fantasy...going from being a youngster to a super-powered adult. But perhaps there was the intention of making the characters more easily identifiable to young readers.

And, according to stories told, Elvis used Cap Jr's hair as a model for his own.

Darci, maybe Jr was faster on that crutch than we are led to believe.

Many able-bodied men avoided the draft, just as in every draft that has been mandated by law. Some because of important connections, some because of a medical condition ("bone spurs" indeed!) and some, like John Wayne, exempted for being a married father living with his wife and children.

What were we talking about? Oh yeah, how Freddie couldn't be caught by those reporters. Maybe between panels Freddie yelled the magic word and got away, then resumed his civilian identity. So quickly a transition even we readers missed it.

Daniel, I can only imagine how the U.S. government would have liked to have gotten hold of that duplicating machine. Another insidious but useful Nazi invention lost because of an American superhero.