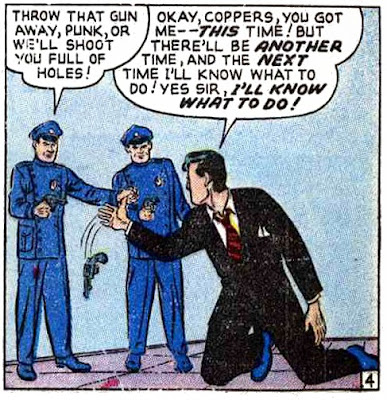 In their heyday of the late forties, most American crime comics stuck to the proven template: show the bad guy doing bad things, then in the last panel have him caught and on his way to prison, or being sentenced by a judge, or killed by police. There will always be some moralizing at the end. Remember kids, now that you’ve lived through nine pages of vicarious thrills, in the end Crime Does Not Pay! Kids and adults saw through that one.

This issue of Justice Comics from Marvel Comics is no different: Johnny “the Gun” Sanchico is a typical criminal psychopath who blasts his way through the story, only to end up dead on the floor in the last panel. Well, serves that punk right! It is a good example of the objections made by some to comics sold to children (they sold to many adults, also, but they weren’t included in the strong criticism). What sets it apart — for me, anyway — is that it is an early example of John Buscema’s artwork. For a while Buscema worked in Stan Lee’s Marvel bullpen. I am always interested in seeing an artist’s early work. This story looks like Buscema needed some practice to get to be one of the industry’s top professionals. I did not recognize this story as being by Buscema, depending on the expertise of Jim Vadeboncoeur Jr, who identified it for Atlas Tales and the Grand Comics Database. 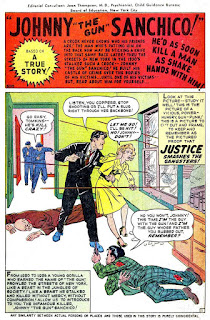 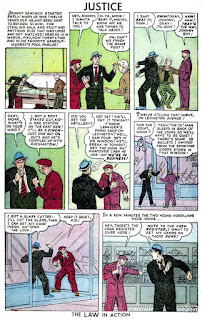 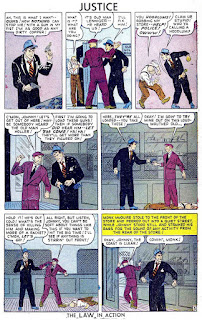 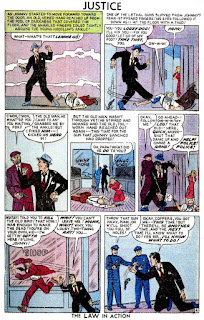 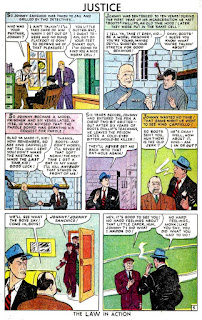 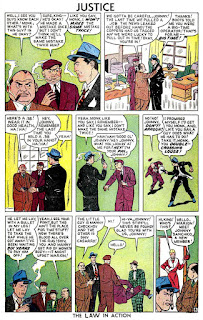 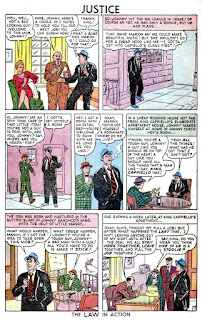 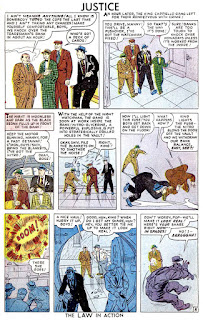 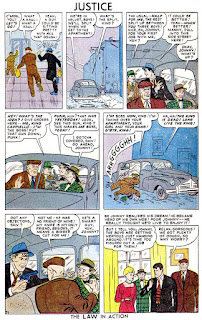 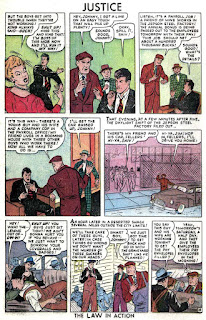 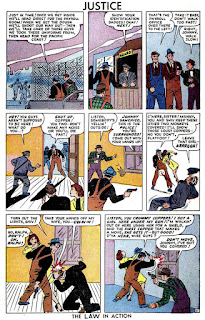 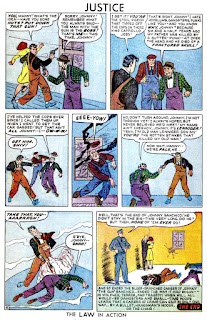 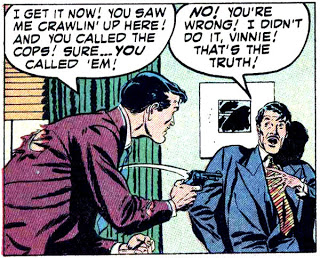 As I've said before, I'm a terrible art spotter, and I'm with you, Pappy, I would have never called that as Buscema but there are a couple faces that look ... close. Maybe?

This is an interesting one because our anti-hero is pretty lame. He doesn't kill a number of people when given the chance (even after he claims to never make that "mistake" again) and gets killed on his second robbery attempt! He's not exactly a gun-crazed killer, as we were promised!

Brian, I go with Jim Vadeboncoeur's opinions because he has the remarkable ability to pick out those really small things that make an artist's style, especially in their early days.

There is always a strong chance the story was worked on by more than one artist.

I am always on the lookout for extreme examples of crime and horror...the stuff that drove the critics of comics crazy in those days. I don't always show them and pick something for other reasons. I know I picked it for the claim it is very early Buscema, but it could have been rougher. In those days they had a resident psychologist reading the stories, so maybe she told them to back off the rough stuff a bit.