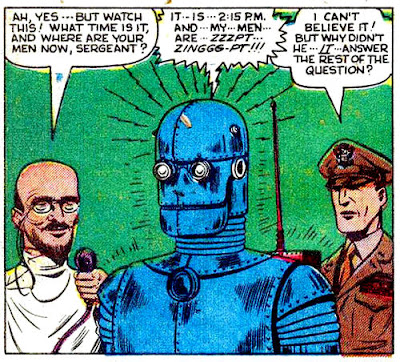 Those sneaky communists! The Russians send a spy to infiltrate some top secret American military secret stuff involving robots with artificial intelligence. The spy’s name is Joe Stalinov, and that familiar sounding name doesn’t cause any concern for the Americans. As a matter of fact, they hire Joe the spy as an engineer to work on the robot project.

Americans act dumb in this story. We have been hearing for a while about Russian interference in the American elections. It isn’t so hard to do if we make it easy for them. That’s what I think of them for falling for Stalinov’s story. I give one guy, Jon, credit. He doesn’t like Stalinov because “he looks too foreign.” Normally I’d shout, “Discrimination!”  —  but Jon is intuitive, and seems to be the only smart one in the room. 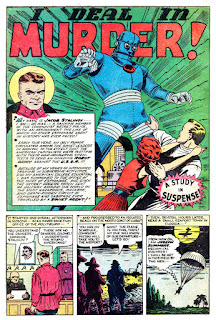 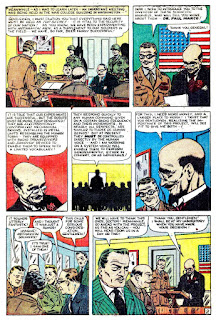 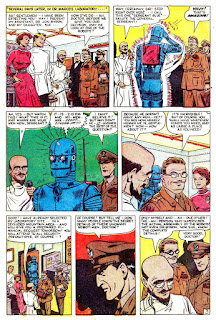 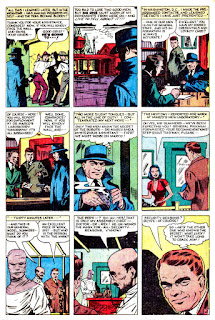 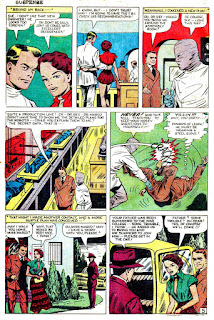 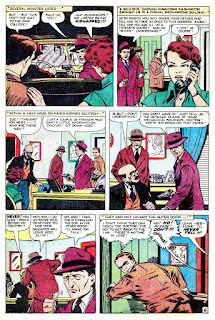 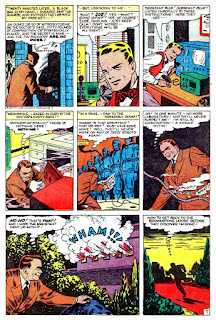 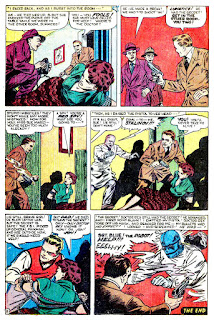 This is Bill's art? Where's the dude in the green swim trunks?

Great art, as expected, and a cool robot design. A bit of a chore to read as the ending is so glaringly obvious that it's distracting!

More deck stacking (did Stan have a hand in this?) where our communist agent is utterly devoid of any or all redeeming qualities. I could never figure out if Stan really hated communists or just thought they were good villains! In the later super hero stuff Stan did the same kind of deck stacking, but at least gave his communist villains a bit more backstory and/or sympathy.

With its casual violence, this story is like a throw-back to the early Golden Age (with Commies replacing Nazis). Of course, it could then have still been drawn by Everett.

Doctor Rex of course sounds like “Doctor X”, which would put some people in mind of Lionel Atwill, and others of Humphrey Bogart. But “Rex” means _king_, and at the end of the story we have a robot uniquely capable of making robots of his own autonomous sort, and seemingly prone to the aforementioned violence. We's in trouble.

Daniel, you hit the nail with the observation that the story is a throwback. Comic book writers loved Nazis so much that after the war, even while the communist menace was staring us down, they wrote many stories about a resurgence of Hitler and Nazis rising back up.

Mickey Spillane once wrote comic books, and when he went into the hardboiled detective novels with Mike Hammer he used commies as villains in at least one of the novels, One Lonely Night. I remember reading it 30 years ago or so, thinking it read like a comic book plot. Communists bad, American Mike Hammer, no matter how psychopathic, good.