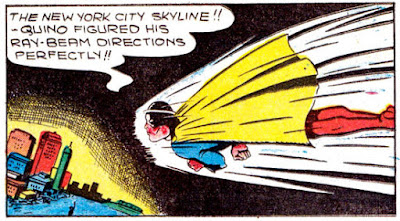 Literally, the one and only Solarman...this is his only appearance in comic books, published in Centaur’s Wham Comics #2 (1940).

He is sent to Earth from Saturn to help Earth people. He beats up some gangsters, then takes off for home again. It doesn’t seem like it would be worth the trip. Maybe that is why he never came back for an encore.

Solarman’s creator, Frank Thomas, had more luck with other features he created and drew. He did The Eye, Dr Hypno, and Chuck Hardy for Centaur, but he also worked for Dell Comics, where he created and drew two of his best, The Owl and Billy and Bonny Bee. Thomas worked in newspaper comics later in his career, including ghosting the Ferd’nand feature until his death in 1968. 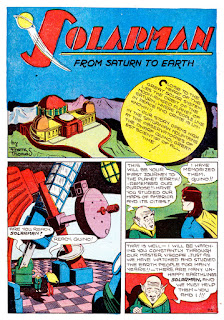 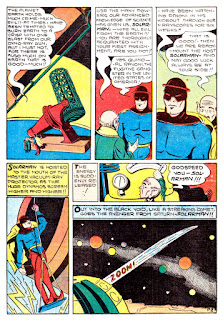 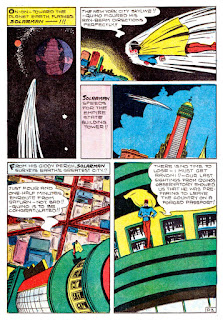 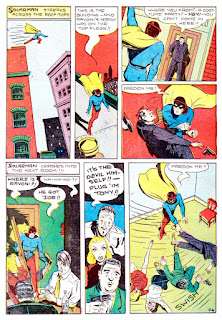 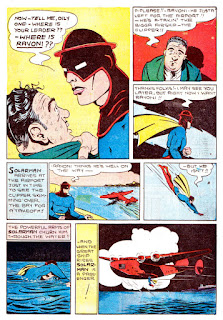 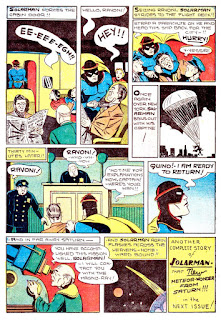 Th' punk hits dames! There's no indication that she'd even drawn a gat!

This is a forgotten treasure. Psychedelic weirdness and naive art to rival any of them. A real gem.

Hey, the end story blurb lied to us!

I love these "super advanced science" stories that are still stuck in the reality of the 40s. A rope swing to start his journey towards Earth? What, did they spin it and fling him? They didn't invent elevators or lifts yet?

This story has one of the interesting problems with the ill-defined super powers set -- there's no jeopardy. Sure, he's not going to die, but it also seems like there's absolutely no trouble in accomplishing his mission.

Also: What good would it be in somebody from another planet wiped out all evil? There would just be NEW evil to fill the void. That never works!

(BTW: Pappy, I do like to poke fun at some of them, but I love reading them. I like to point this out that I am super happy you are presenting this stuff to us!)

Brian, something I remember about my earliest days in comic fandom...the goshwow factor. The older guys, who had been collecting the comics since they were kids in the thirties or early forties, were nostalgic, and the young guys, like me, caught their enthusiasm, so that everything from the Golden Age became, well, golden. Like you, I may sound cynical, but I still think the stuff is fun, even when dopey.

Solarman is proof of hole-plugging. I think the editor might have needed to fill that exact number of pages for Wham #2, and reached out to a guy who could deliver. Who cares about a logical story? They must've looked at it and thought they didn't need a sequel.

Fred, I think it is more from hunger than psychedelic. I agree on the weirdness and naïve art, even though I have a definite fondness for Frank Thomas' work.

Dan'l, maybe she just passed out at the sight of Solarman's manliness.

This artwork reminds me of another bizarre golden age artist, whose name I can't remember. His work was collected into a book in the last ten years but I can't remember the name of the artist. His stuff was so strange that he seems to have become something of a legend. Wish I could recall the name. Ah, the ravages of old age. LOL

Fletcher Hanks was the artist whose name I was trying to remember. I wish you would post some of his "classics". Some truly hilarious stuff, even by comics standards,

Your wish is my command, Fred. Just put the name Fletcher Hanks in the search engine (top left on the blog page) and you'll see what I have posted.