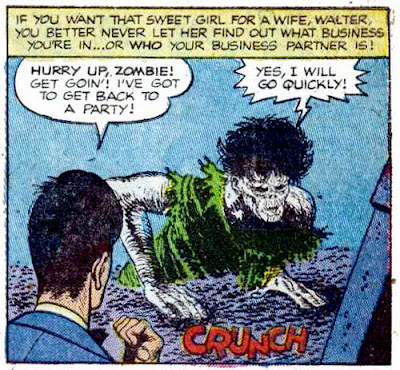 We're sliding into August with a couple of stories from Uncanny Tales #21 (1954). I don’t think there is anything new about the stories, but I like the artwork.

“When Walks the Zombie” is drawn by Bill Benulis and Jack Abel. Abel was a long-time comic book journeyman. Interesting to me from his Wikipedia entry is that he had a stroke in 1981, and rehabilitated his right hand so he could draw and ink again. That is dedication! Benulis quit drawing, according to his bio, after he left comic books in the '50s. Like artist Fred Guardineer, Benulis found the Post Office a good place for a post-comics career. That pension plan probably looked real good after years of freelancing.

“Tomb for Two” is credited to John Tartaglione, another long-time journeyman, who was an all-around guy at Marvel Comics for years. He could draw, he could ink, he could do production. As my dad, Big Pappy, once told me: “Make yourself valuable to your employer.” Tartaglione did that.

All three gentlemen are now deceased. 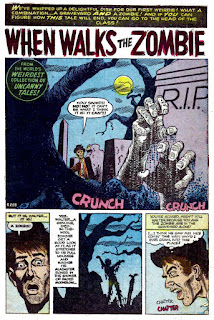 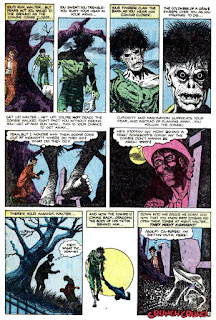 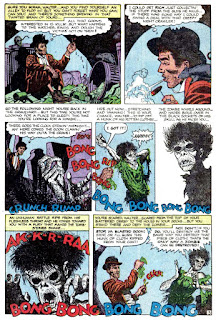 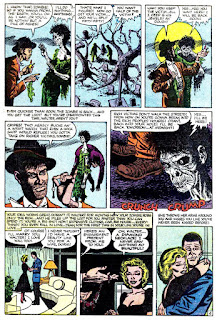 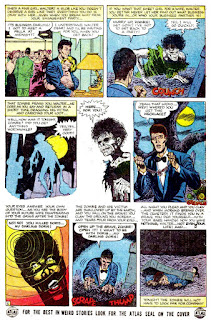 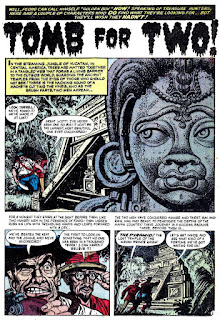 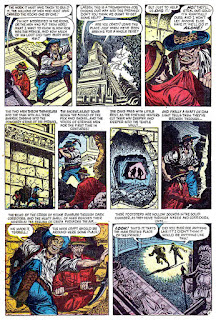 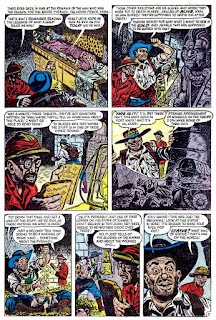 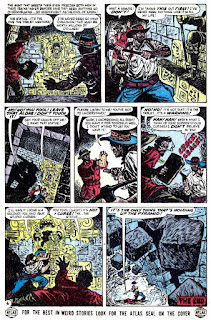 As always, I love Atlas horror. Great artists, punchy stories, but ... stop challenging us that we'll never guess the ending. I think 40% of Atlas stories start that way!

I also love how Stan, or whoever wrote these, could just make-up lore on the spot. Burning a bit of the zombie's shirt kills it? Sure, whatever, just keep the story moving!

I hope that "Tomb for Two" is never included in a study of the Mayans. I don't think there's a single thing that's right in there, except that it's in the jungle and they had religious monuments that were sort of shaped that way! Everything else: yeesh! Was there no library in New York?

I like to be snarky, but these are super fun comics.

It's one thing for Walter to make the wild inference that the zombie is using cadavers for company, quite another for “When Walks the Zombie” to treat that inference as natural. And, outside of this tale, I've never encountered the idea that one may destroy a zombie by burning a bit of its clothing, yet Walter not only knows this trick but is so sure of it that he gambles his life on its working. But, yes, the art does a good job of holding the reader, and one could understand almost the entirety of the story even with the words removed.

In “Tomb for Two”, Tartaglione seems very much to be trying to incorporate some of the style of Jack Davis.

You know Pappy... now that I think about it... everything by Lev Gleason was "wordy?" THe Daredevil, Boy, Crime and Punishment comics all were verbose, no?

I think the runner-up for wordy comic books were EC Comics written/edited by Al Feldstein. When captions and word balloons crowd out the artwork, cut back and let the art shine through.

Brian, oh gee, "dare the reader to guess the ending"? How about turning to the last page and cheating by looking ahead. How about showing the ending in the splash panel, which some comics did. Or just by using your own native smarts...how would you end the story? Yep, you are ahead of the writer with that ploy.

ACG editor Richard E Hughes was big on hyperbole, too, in a similar fashion. He also had cover blurbs that read "6,347 thrills and chills guaranteed!" At least Stan Lee, or whomever else may have been writing stories and cover blurbs, didn't go that ridiculous extreme.

Daniel, both you and Brian picked up on the burning a bit of the zombie's clothes. Who knows? Since the zombie in this instance is a supernatural creature maybe it would work. But as you point out, risking your life that it will work is taking too big of a chance. I'd deadbolt my doors and hide behind them while trying the burn, then peek out the window to see if it worked. If not, check my stash of Atlas comics, see if there is another zombie story and maybe that method of zombie destruction will work. Or, if dealing with zombies from today's mythology (born of Night of the Living Dead by the recently deceased George Romero), shoot 'em but aim for the head.

Your story about Abel's stroke reminded me of reading this, presented very matter-of-factly by artist Dean Ormston in BLACK HAMMER in 2016: "I don't always do layouts, but halfway through pencilling issue #2 I had a bang on the head and suffered a brain hemorrhage that caused paralysis down my right side. Being right-handed, I was unable to work for six months, so I started doing these layouts as a way to rehabilitate my hand, which had no feeling." He continued with the series and from the quality of his drawing you would think nothing had ever happened. Dedication.