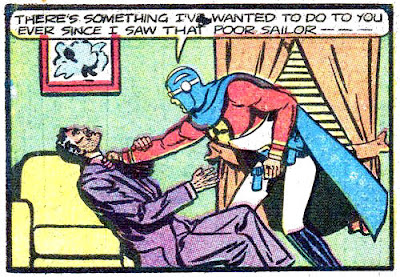 Skyman, a hero from Big Shot Comics for the duration of the forties, shared something with Airboy. They both flew tricked-out aircraft, and during wartime did not have a problem getting aviation fuel. I don’t know how Airboy got fuel, but Allan “Skyman” Turner was another rich comic book playboy who acted the fop, yet was really the masked aviator fighting America’s enemies, foreign and domestic. (My guess is Skyman might have bought some fuel on the black market, and if he did, shame on him.)

In this story from Skyman #2 (1942), he is up against a mysterious killer green fog. The villain has figured out how to condense various poison gases into the fog. Luckily for the civilians caught in that fog no gas mask is needed, just a wet handkerchief over the face. (Note: it would not work.) The unknown writer, not credited by the Grand Comics Database, not only gave bum information for surviving a poison gas attack, but used dialogue like this: “I’m a fisherman by nature and by inheritance...” Eh? Just “I’m a fisherman” will suffice, Mr Nature and Inheritance.

Nice artwork, as always, by Ogden Whitney, an artist by nature. I’m not sure about inheritance. 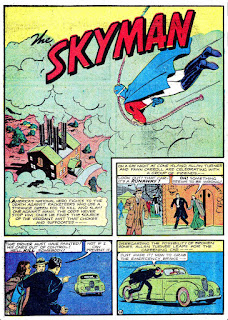 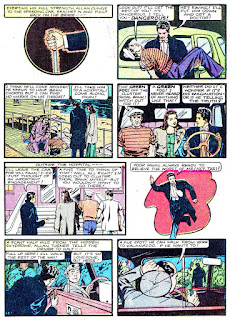 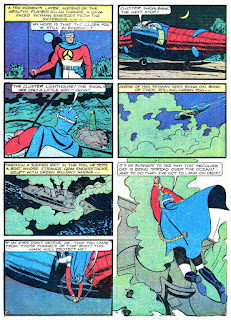 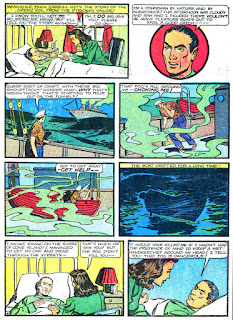 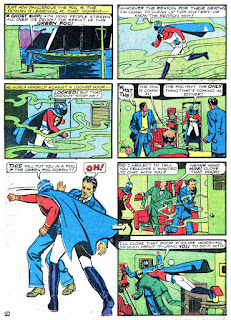 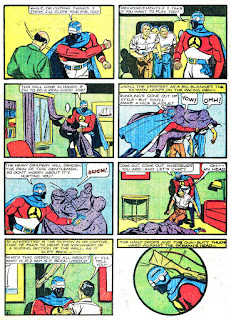 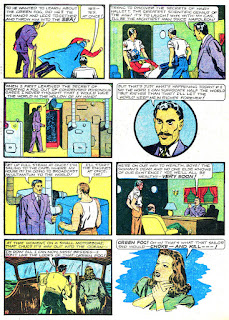 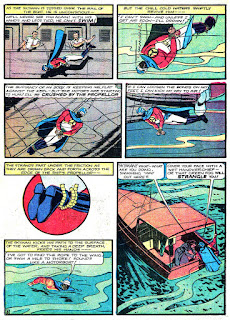 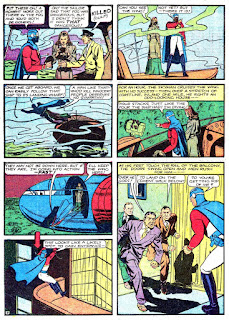 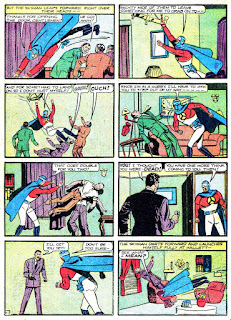 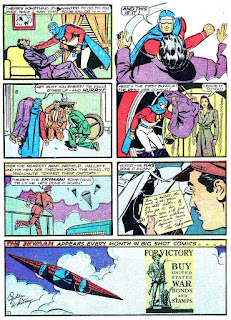 Hi, any idea why Big Shot didn't have more Skyman covers vice "humor " covers? One would have thought that super hero covers sold better? Thanks!

Charlie, I can guess. The publisher may have wanted to highlight that Big Shot was a true anthology comic, mixing superheroes and comedy features. They might have done what they did to keep themselves separate from the publishers of more violent comic books.

Publishers kept track of what covers sold best, so if there were more humor covers then humor was what sold. Also, most superheroes became passé after World War II. Most of them were canceled. At least Big Shot kept Skyman in a mask, but the Face took off his mask and became Tony Trent.

Re: "This should assure any of you who ever doubted that Pappy's is a one-man operation"

Sorry, this doesn't convince me. To really foul things up, you need a corporation. In fact, I suspect we now know what happened to Radio Shack!
;-)

From http://internationalhero.co.uk/s/skyman.htm :
"Wing, a boomerang shaped plane that flies using the power from the Earth's magnetic poles"

So we don't have to worry about were Allen got his fuel.

Thanks for that information on Skyman's plane. I appreciate you setting me straight. So as long as the poles are magnetic Wing has the power to fly. Why didn't Skyman sell (or give) that technology to the government? Greedy rich guy or indifference to needs of national defense? For shame, Skyman! For shame.