Number 2088: A sprinkle of Stardust 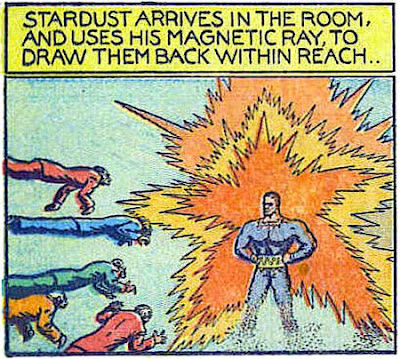 Fletcher Hanks deserves his reputation as one of the most unique of the early comic book creator/artists. His stories can be...well...berserk.

In the origin tale of Stardust, for instance, Stardust’s arrival on Earth is foretold by a voice on the radio. Stardust, whose attitude toward justice is very Old Testament, is heralded by a disembodied voice like that of an angel, as if Stardust were a god. Hanks, who died years later on a park bench, presumably of alcoholism, probably had his own demons working on him. Whatever the reason, his works, almost 80 years old, are now prized as being both crazy and entertaining. His huge lettering shouts a god’s punishments for evil. 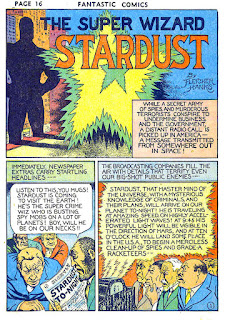 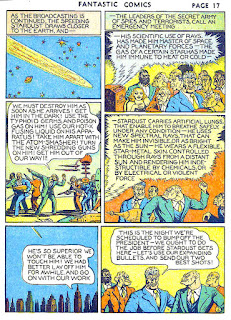 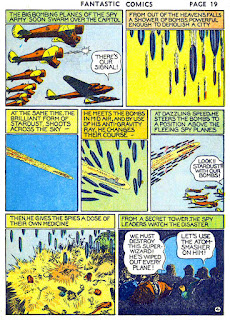 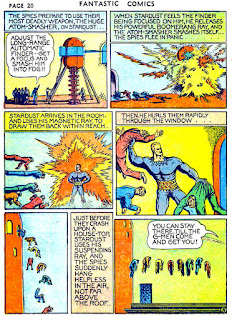 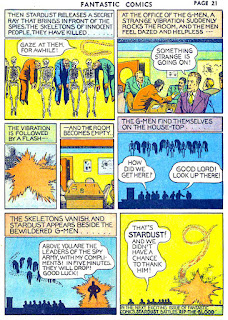 *“I Shall Destroy All the Civilized Planets” and Turn Loose the Death Rays and Kill Them All!: The Complete Works of Fletcher Hanks.
Posted by Pappy at 12:01 AM

Awwwwwwww, yeah. Those two books (there's also a hardcover and digital edition combining both volumes entitled Turn Loose Our Death Rays and Kill Them All!) are pure gold. It's a toss-up as to which character, Stardust or Fantomah, passed the most horrifying judgments upon the villains who challenged them, but I'll give the award to Fantomah just for a single panel of a fuming gorilla punching a sad, helpless mummy. Tabu, Space Smith, Big Red MacLane...they're all SO bad, and all SO wonderful.

Off-topic: I wonder who owns the rights to certain Gold Key properties. They could make a killing off the right reboots. I'd love to see Little Monsters (the laboratory-assembled children of a pair of Frankenstein Monsters) and Batty and the Green Grumble (incompetent funny-animal parodies of two crime-fighters on '60s TV, whose evil schemes always backfire) shake off their cobwebs.

Whoops! The separate Fletcher Hanks volumes are I Shall Destroy All the Civilized Planets! and You Shall Die By Your Own Evil Creation! The combo volume is, as you mentioned, Turn Loose the Death Rays and Kill Them All!: The Complete Works of Fletcher Hanks. Sorry if I generated any confusion.

Love his stories! As original as Wolverton.

Let me second the Hanks books, entertaining to the extreme. Hanks is one of those artists who everything he did ... let's be honest -- sucked ... and had almost identical themes (his Jungle goddess book Fantomah was basically a mystical version of Stardust) ... but, and here's the important part, everything just pours and drips with whatever monsters were animated Hanks.

There's an angry, bitter, vindictive nature to what is basically a story of god taking vengeance on evil men -- he draws all the bad men very ape-like, and Stardust as a perfect male specium. Each panel is a window into whatever darkness swirled around in his soul. It's fascinating.

Stardust might have been the ancestor of Ditko's Mr. A- they both viewed the world as either pure good or pure evil, no in between, and neither had any qualms against killing evildoers.

The faces of the spies might have influenced Basil Wolverton when he began to draw his bizarre style of faces later on in his career.

BillyWitchDoctor, my confusion in the volumes' titles came because I only own the first, and have not seen the second. I recommended it based on the quality of the first volume.

Thanks for your note clearing it up for me.

Both volumes have been lovingly assembled into a single Complete Works of Fletcher Hanks (with a few minor by surprising additions not in the original books):