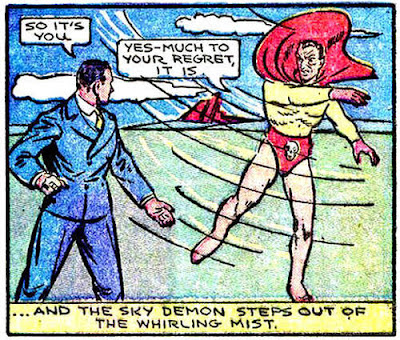 There is something irresistible to me in images of flying simians. Maybe it was goes back to when my mom took me to see a theatrical re-release of The Wizard of Oz in the mid-fifties, and I saw the Wicked Witch’s flying monkeys. It is no secret to longtime Pappy readers that I am one of those fans who bought comic books if they had gorillas and apes on the covers. A deeper psychological reason I don’t want to explore, but I still like the imagery in comics. In 2014 I showed another flying gorilla story. See the link below.

This 1940 story from Slam-Bang Comics #6, has a super villain, the Sky Demon, dressed in an “enchanted” cape and bright tights, up against sartorially impeccable magician hero, Diamond Jack. The Sky Demon uses his flying apes as henchmen, or henchapes, if you prefer. He prepares to arm them so they can go down to Earth and destroy all human life. I'm all for setting goals, but that seems a reach.

Gus Ricca is credited by the Grand Comics Database as artist. 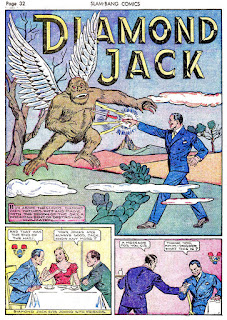 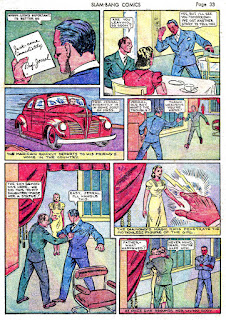 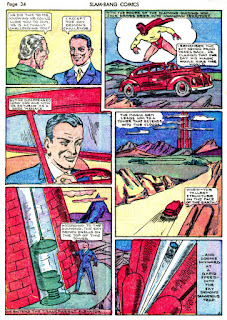 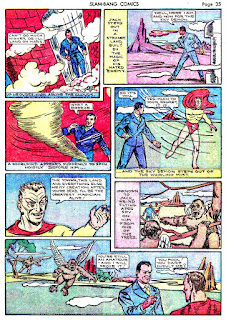 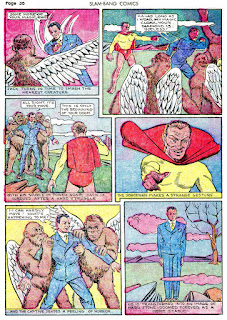 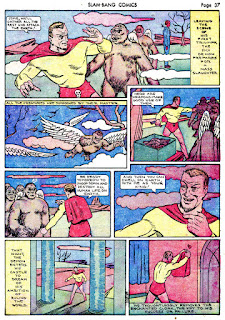 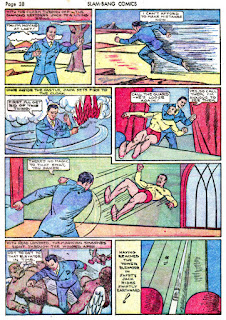 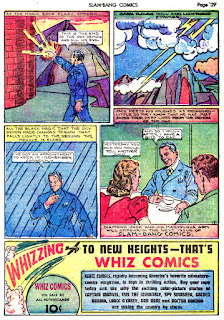 As promised, more flying gorillas. Just click on the thumbnail 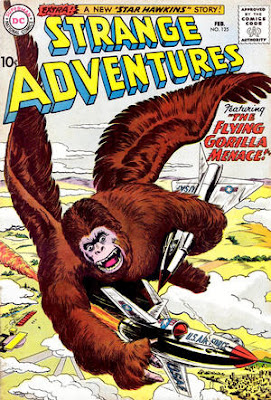 It hardly seems fair for Jack to call the Sky Demon a faker. If he was merely faking things, then how would Jack have been imprisoned and from what would he having been saving the world? an illusion of death?

But taking off the cloak was definitely an amateurish move.

The exercises of magic in these early comic books seem fairly arbitrary. Not usually quite to the extent that they were in stories by Fletcher Hanks, but not so far away as one might expect in the absence of reading these other stories.

For my part, of the comic-book tales openly of magic and of ostensible justice, on grand scales, I like best the early tales of the Spectre.

Oh my lord, the hero wins only because the villain "absent-mindedly" undresses for bed, removing the child's Halloween-costume devil cape that passes for a "cloak" in this world. That's Fletcher Hanks-grade wonderful.

Some where I read DC felt ape covers sold better? Hence they used them a lot in the 50s and 60s. Thoughts? Cheers.

Daniel, BillyWitchDoctor, both of you bring up similar points about the story. All I can say is, yep, that's comic books! I can also say, unequivocally, is that the characters in comics were no smarter than the writers and editors who supplied the stories.

You also both mention Fletcher Hanks. Stop it guys, you are scaring me. It makes me think you are in collusion!