Number 2092: Vampire under the big top 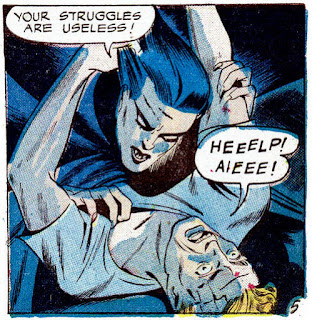 My hand is in the air, waving wildly, and I have a question. How did Countess Elyra Barovna get her job as a trapeze artist with the circus? She did not demonstrate her abilities to Lortiz Hugenberg, the circus owner. He just took her word that she could swing!

The Countess has feminine charms, and since she is a vampire (I hope I didn’t ruin the surprise for you) perhaps she used the vampiric mind control trick to get her own way. It happened between the panels, I suppose, since we don’t see it. Were I in Mr Hugenberg’s position I would wonder about taking on a new performer and then finding others in my troupe drained of blood. He had to have been hypnotized.

What I really like about “Big Top Nightmare” is the dynamic artwork by Lin Streeter. Streeter is an artist about whom not a lot is known, but whose name pops up in comic books going back to the very early days (circa 1940), for various publishing companies.

The story appeared originally in The Beyond #5 (1951), from Ace Comics. 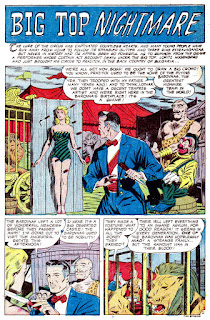 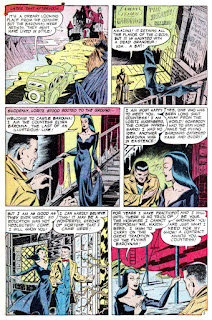 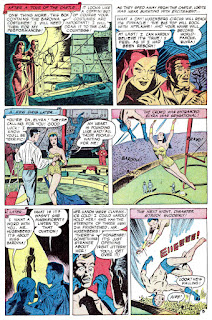 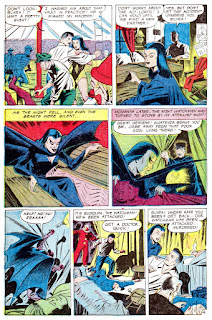 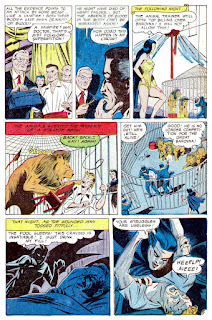 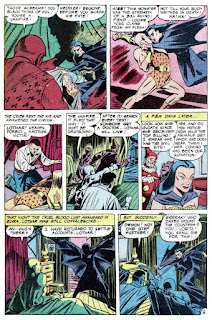 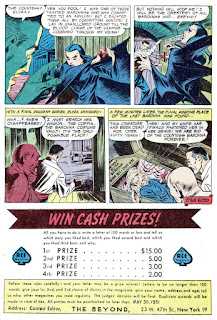 Email ThisBlogThis!Share to TwitterShare to FacebookShare to Pinterest
Labels: Ace Comics, Lin Streeter, The Beyond

Pappy asks: "How did Countess Elyra Barovna get her job as a trapeze artist with the circus?" and then later answers his own question: "The Countess has feminine charms." :)

I love how absolutely dumb our hero is. Goes to ancient castle, while previously being warned about crazies. Sees a bat. Suddenly sees hot goth lady (yeah, yeah, I'd fall for that, too.) Needs to have her trunk that looks exactly like a damn coffin traveling with her. Now, that's dumb, but when the very first vampire murder happens -- right after the Countess arrives -- he doesn't put 2 and 2 together?

Oh, hey, vampire lady -- how about you eliminate the KNIFE THROWER FIRST. I like this story, it's a fun, silly horror comic full of dumb characters and monster attacks.

I can visualize Lou doing his stammering as the Countess uses her sultry charms, then makes her moves on him with death bared, and Bud scoffing at Lou's claim that she is a vampire. As comedy it would have worked better than it did as straight horror.

You know something else that would have been better with the addition of Bud and Lou? Hammer's 1972 "Vampire Circus."