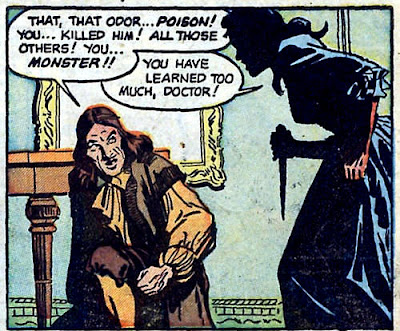 This is number two of our theme week, featuring comic book females of the forties.

We ended July with a story of a male poisoner, William Campbell, and now a tale of a female poisoner, Marquise De Brinvilliers, who allegedly poisoned her family members during the time of Louis XIV of France. As in the story, told in Real Crime Comics Vol. 5 No. 5 (1950), De Brinvilliers was arrested by a cop posing as a priest.

What isn’t shown is that the Marquise was tortured, beheaded and burned at the stake. There was also the major scandal of the Affair of the Poisons, touched off after her arrest, which led to the execution of 36 people. It is not covered in the comic book version. (You can read about it here). Our version is drawn by John Prentice. Prentice’s strong illustrative style shows even with the blobby printing of the comic book. A few years later, after the death of “Rip Kirby” artist, Alex Raymond, Prentice was given the job of continuing the comic strip. Prentice died in 1999.

I am also pleased by the poster-like effect of the cover by Prentice, which is either a re-drawing or a blow-up of a panel from the story. 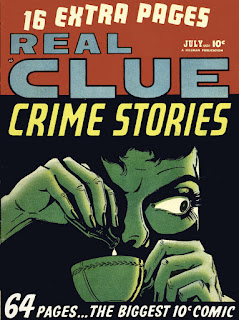 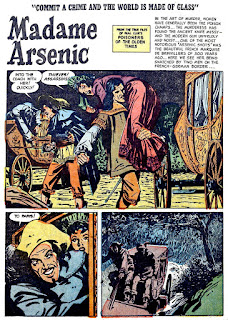 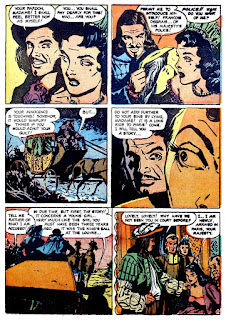 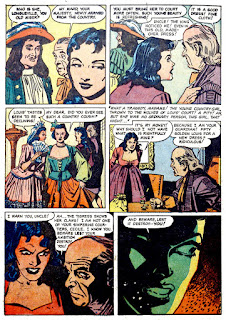 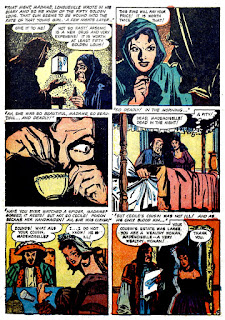 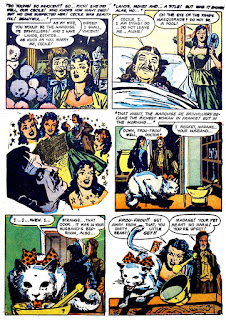 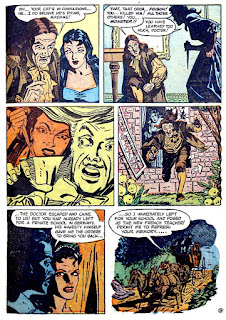 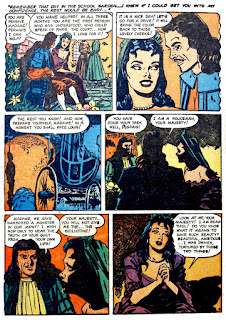 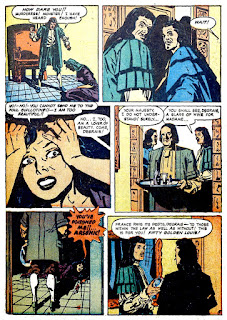 Yes, surely not the guillotine, as it was not introduced until the next century. (There were precursor devices, but not used in France.)

When the story began, I looked at the dress of the characters and instantly thought of The Three Musketeers, one of my favorite novels. Then, lo and behold, I learned from Wikipedia that Dumas himself had written about the Marquise! In fact, it was one of many fictions focusing on de Brinvilliers, none of which seemed to even suggest that she might have been innocent of the poisonings. But how exciting a story would that have made? Still, I tend to flinch when encountering a fictional version of history that damns someone who may not have done or likely did not do what s/he was accused of--I point to such (admittedly great) stories as Amadeus, Richard III, and From Hell. Personally, I would have liked there to have been at least the shadow of a doubt in today's strip. Obviously, the writer had space limitations, but the inclusion of de Brinvilliers' lover, her extended flight from Paris, and even a mention of the other possible murders (the poor hospital patients, in particular) would have been much more interesting than what we got. Having said that, I did like the strip's structure, starting in medias res and revealing all in flashbacks. It was enjoyable but didn't reach its potential.

As you say, beautiful art even through the muddy inking and printing. It's one of the things I always like in crime comics -- the evil deeds look more evil when you get that advertiser style clean art.

They really jazzed this one up, didn't they?

Daniel, I'm not familiar with all the ways criminals or enemies of the crown were put to death in France, but before the guillotine they could have used an axe to chop someone's head off?

Ryan, I think it was beyond the scope of a crime comic book to even hint that someone might not be guilty. As for me, I have no opinion on guilt or innocence concerning crimes committed a couple of hundred years ago.

I often think of Ma Barker, who probably wasn't guilty of being the mastermind of a criminal gang in the 1930s, but was vilified by J. Edgar Hoover, purportedly to calm a public outcry when FBI agents gunned down the old lady. You ever see a movie featuring the Barker gang that didn't make ol' Ma Barker into a tommy-gun totin' granny with a trigger finger?

Brian, while I appreciate the illustrative style used in advertisements and comic strips like Rip Kirby, I really prefer my comic art to look more...well, comic bookish, which includes exaggerations and a bit less slickness.

In France, prior to the introduction of the guillotine, decapitation was reserved for nobles and was by the sword.

The usual method of execution was hanging. (This was before the introduction of the long drop, so unless the convict had a opportunity to leap and took it, he or she would spend time consciously being strangled. Hence, decapitation was considered less terrible.)

Burning, boiling, beating, and dismemberment were methods of execution for some classes of alleged transgression.