Number 2094: Space Smith and the 7th son of the great Skomaw 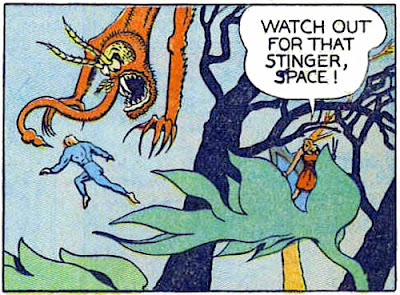 A couple of weeks ago I showed the first Stardust story by Fletcher Hanks. There are two stories by Hanks in Fantastic Comics #1 (1939), Stardust and Space Smith. Hanks got to sign his Stardust story with his own name, but used a pen name, Hank Christy, for Space Smith.

Not that it matters. Both stories are off the wall, but Stardust really wins the prize for most oddball of the two. I have read many Flash Gordon/Buck Rogers imitations from the early years of comic books and Space Smith fits into the space hero oeuvre. He travels with his girlfriend, Dianna — and did anyone complain about Flash and Dale, Buck and Wilma, not to mention all of their imitators, traveling with partners without being married? Oh, the scandal! — so like many other space heroes, Space and Dianna meet some crazed dictator who wants to take over the Earth, and by the way, wants to marry the girlfriend, too. (Considering her status as girlfriend, maybe Dianna should have considered the offer.)

In this case the dictator is Skomaw, “the 7th son of the great Skomaw.” (I am glad he made his lineage clear for the sake of anyone looking into his claim to the throne.) Also typical: Space and Dianna bust out and encounter some Martian horrors along the way, including a giant mosquito. With that, Skomaw and his giant brain and the “imp men,” I think Fletcher Hanks hangs on to his reputation as creator of some of the screwiest of screwy early comics. 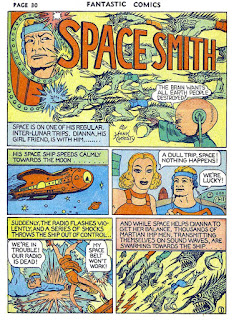 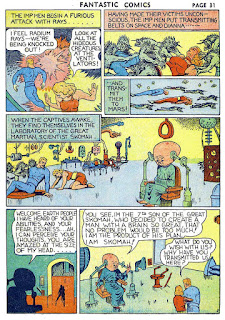 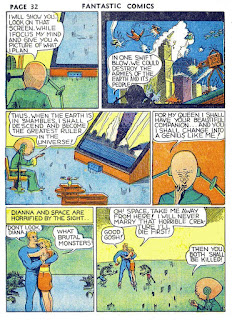 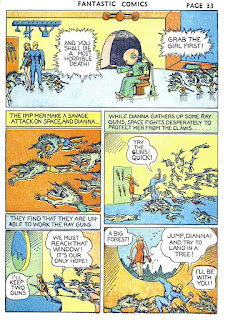 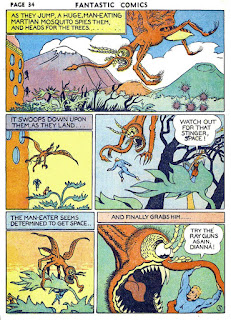 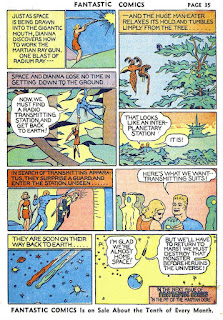 I'd have to wonder about a reader who thought this story to be drawn by an artist different from whomever drew the Stardust story.

By the way, Pappy, one of my side projects involves a series of comic-book science-fiction stories imitative of the early golden age stuff. The male protagonist ends-up with a female travelling companion, who is frustrated in her dealings with him because he and the others in his circle don't understand Mandarin, and she refuses to speak English (though she understands it quite well). The lack of communication keeps the two in separate bunks and out of the temple. But I don't think that frustration itself is amusing, and at some point I'll get the two married.

One reason Hanks stuff is so fascinating is because of his own bitter need for divine judgement -- his stories are filled with. This one, though, doesn't have that element. It's outright serialized space nonsense, and almost everything that happens works to drive the plot, instead of the other way around.

It's fascinating, too, just in a completely different way.

One thing to take heed when you write your own serialized Buck Rogers rip-off -- don't name your hero "Space" and then use "Space" as a modifier on stuff. It's confusing!

Daniel, I think it would be difficult to share a limited space with a comely female and not have biological urges bubble to the surface. In that case it would strain the relationship if I thought she was beautiful and she thought I was repulsive. I would probably not want to know what she thought of me, so a language difference would be good.

I have come upon an unsigned story I will be showing in early October I believe may have been written, but not drawn, by Hanks. So it is possible that Space Smith was by a different artist, or perhaps Hanks working in collaboration.

Brian, I'm not a psychologist, but I play one on this blog. I wonder if Hanks had a religious background of a fire-and-brimstone type indoctrination. I know people who have left religion behind and even after decades still feel its effects.

"Space was spaced in space" would probably be a good sentence to baffle readers who are learning English.

As you may note in my intro to "Turn Loose Your Death Rays and Kill Them All!: The complete Works of Fletcher Hanks", his father, William, was a Methodist preacher. Hanks grew up with the air filled with hellfire, and brimstone.

I am looking forward to reading the possible Hanks- scripted story that you have discovered.

Paul, my belated thanks to you personally for the work you did on the volumes, introducing Hanks to a much wider audience.

My feeling is that Hanks was probably a person haunted by guilt as well as alcoholism. Leaving his family, especially after his upbringing, probably made his condition worse. I am armchair-psychoanalyzing him decades after his death, but just based on his stories I believe he had a strong sense of right and wrong, and the need to punish wrongs. I can only imagine what went on in the mind of Fletcher Hanks.

The work of Fletcher Hanks gives the feeling of having used LSD, without violating any state or local laws. Bizarre.