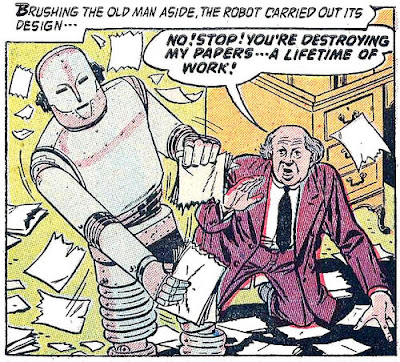 Martin Chesterton has worked for years to build a robot with artificial intelligence. It works, but not in the way he intended. “The Robot” is a story where the robot not only has AI, but the ability to read Chesterton’s thoughts: a personal mechanical genie granting an unwitting master’s wishes.

Not withstanding the ESP elements, this is a fairly well thought out story. Sometimes when ACG had stories like these they were inspired by other sources, so if it is swiped from a science fiction story by someone else I’d like to know. To me it does not have typical Richard E. Hughes elements. The script may be by someone other than editor Hughes, who eventually he took over all the writing at ACG.

Art is credited to Mike Suchorsky, based on an interview with the artist. Quoting from the Grand Comics Database: “Art credits from Suchorsky in an interview with Hames Ware and Jim Vadeboncouer, Jr. in the pages of Alter Ego #27 (August, 2003), which reprinted a page of this story.” Cover is by Ogden Whitney. 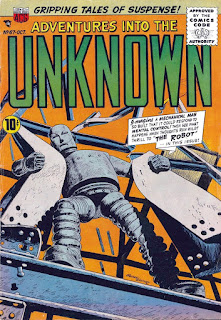 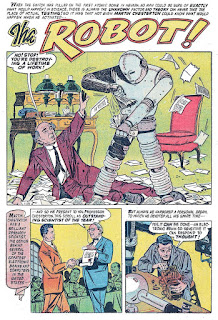 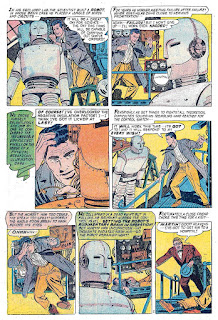 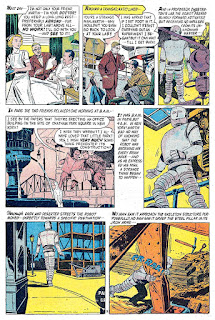 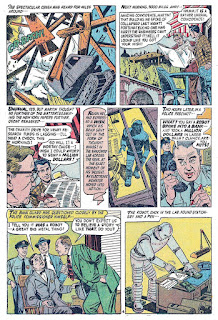 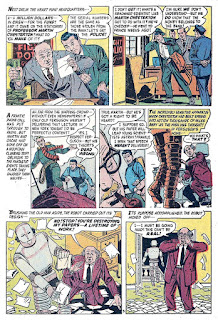 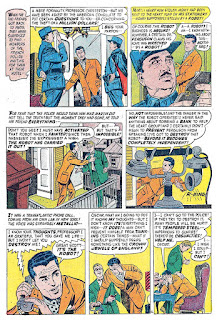 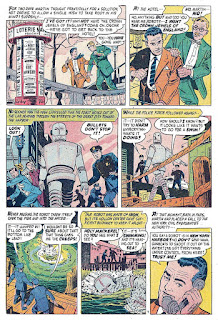 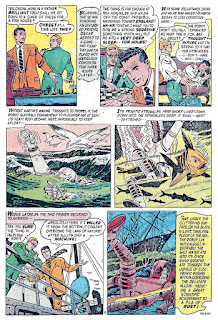 Email ThisBlogThis!Share to TwitterShare to FacebookShare to Pinterest
Labels: ACG, Adventures Into the Unknown, Mike Suchorsky

Martin Chesterton lives happily ever after. Not so happy are those owning shares of various insurance carriers, the owners of the land which was once a park (and is left as neither a park nor an office building), and ol' Ferguson. This story could serve as something of a metaphor for busybodies who advance social policies based on smug presumptions, with no concern for the rights of other people; who leave destruction in their wake; and who then take no responsibility for the damage.

Setting aside considerations of that sort, my problems with this story are [1] that no real explanation is given as to why the robot didn't notice the plan, especially with Chesterton (like the author) gloating about its brilliance, and [2] that a key point (that the robot would complete stop operating with Chesterton in an induced coma) wasn't presented until it was almost backfill. (Yes, it was noted quite early that the robot would not start without a thought, but that much and no more follows from the robot being a device that responds to desire. It is doubtful that Chesterton's specific desires would be actively felt during all the time that the robot were acting to see them met.)

(There's also a matter of the robot somehow both being inert and frantically struggling.)

I don't know of a prior story in which a thought-controlled device was deliberately stopped by putting a sympathetic (!) character into an induced coma while the device was vulnerable. Of course, I've not read the vast majority of the science fiction or fantasy written up to 1955 (let alone that written since).

Being careful of that for which one wishes features in many stories, including of course “The Monkey's Paw” by W[illiam] W[ymark] Jacobs and Strangers on a Train, at least as adapted by Chandler, Ormonde, Cook, and Hecht.

OK, this is a great little adventure story, and I love the clean art which works well for this type of light sci-fi. Nothing unique but a good robot design.

I do have to say there's one part in these tales where I can never suspend disbelief -- how dangerous the robot would be to society that it has to be destroyed with a clever trick. Would bullets bounce off? Sure. Explosives wouldn't, and we just fought a war with bombs that were designed to blow through multiple meters of re-enforced concrete. I thick we could take a metal robot!

Daniel, Brian, as always, excellent analysis from both of you.

I didn't bring this up in my commentary, although it was on my mind while preparing this story for the blog: Stephen Hawkings opinion that artificial intelligence in machines could bring about the end of mankind.

As counterpoint in the article, several artificial intelligence innovators are more optimistic that humans would control the technology. Unless I live a few more decades (unlikely) I probably won't see which way the pendulum swings.

Another point I suppose I could have brought up is that any robot given artificial intelligence by humans that could turn on its creators is a Frankenstein story. Mary Shelley used parts from dead bodies, but a story, using human or mechanical parts, is part of that tradition.