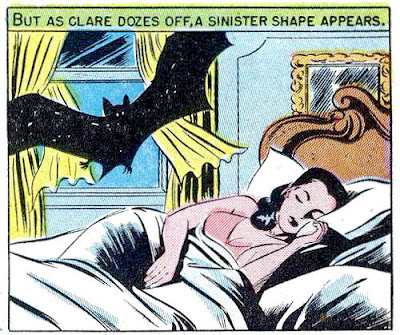 We begin another theme week, and like last month, the theme is comic book women of the forties. First up, Moon Girl.

Clare Lune, Moon Girl, must have needed a job when she accepted a position in a mansion far into the Bayou. She is all set to tutor little Mary, when the house is assailed by a vampire. Despite Moon Girl’s powers and obvious ability to take care of herself, she has to call in her boyfriend, the Prince. The story is kind of a mess, ending abruptly. We aren’t shown how that tutoring job turned out. At least the artwork by Sheldon Moldoff is atmospheric, and foreshadows his later work in Fawcett’s horror comics.

Grand Comics Database lists the writer as Richard Kraus, based on information from Tales of Terror: the EC Companion. Moon Girl #4 (1948) was edited and published by William M. Gaines, who took over EC Comics when his father died in a boating accident in the summer of 1947. 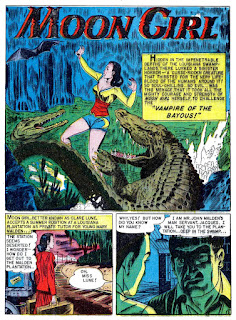 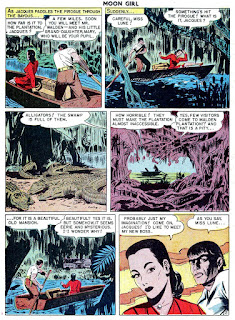 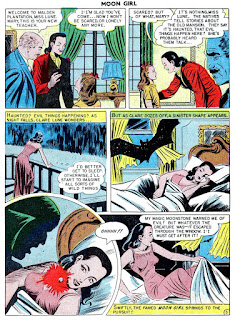 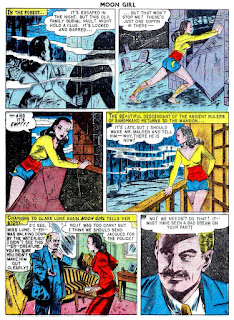 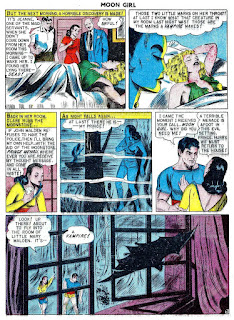 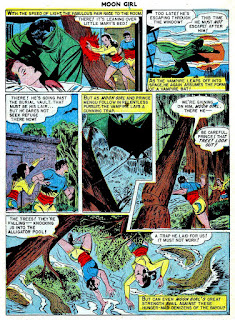 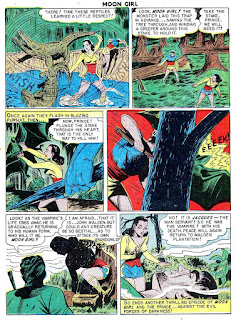 Moldoff's art on this story is different from the more realistic, muscular style he used on Hawkman, which is his work I know best, or at least that I thought I knew best because he signed it. I'm afraid I didn't realize, until doing a few minutes of research before writing these comments, just how important he was to golden-age comics. He had a page in the landmark Action Comics #1, he drew the cover of Flash Comics #1 and also of All-American Comics #16 (Green Lantern's first appearance). There's also a possibility, as he contended, that he had given Bill Gaines the idea for the horror comic. But Moldoff's biggest contribution was as Bob Kane's ghost in the first year of Batman and then again from the early 50s to the mid 60s. He was, as an online article last year put it, an "unsung" hero. Fortunately, a fan introduced him to the San Diego Comic-Con in the 80s and he enjoyed the popularity that Kane's ridiculous contract had prevented earlier.

Hi Pappy - Moldoff sounds bitter in every interview I've ever read....I wonder how much of what he says about being screwed by Gaines is true, or if the reality is somewhat more ambiguous? I never got the feeling that Gaines was that ruthless...

Hi Pappy - Moldoff sounds bitter in every interview I've ever read....I wonder how much of what he says about being screwed by Gaines is true, or if the reality is somewhat more ambiguous? I never got the feeling that Gaines was that ruthless...

Ryan, I remember a "revelation" in the earliest days of comic book fandom (1961 or so), when one of the older fans said, "You know, Shelly swiped from other artists." Oh, horrors! It is my opinion that if there had been no Flash Gordon or Prince Valiant for artists to swipe from most comic books would have looked a lot different.

I have looked back on Shelly's Batman art for Bob Kane, and have spotted swipes from fellow Batman artist Dick Sprang.

Sheldon Moldoff does hold an important place in comic book history, but most of his art was done when comic art was anonymous, or at least mostly so.

Brad S., Moldoff went to Gaines with the idea for something called Tales of the Supernatural, and some stories were drawn, which were used in the late pre-Trend books, War Against Crime, etc., when EC was getting ready to boot up their horror comics. Where the problem was for Moldoff is his claim that Bill Gaines had promised him a piece of the financial rewards should his title be a success, and then Gaines either reneged, or his business manager said no can do. It was a whole different business then, and Gaines was definitely of the era, owning everything, and paying the artists on a piecemeal basis.

As I understand the history, Moldoff took his idea for Tales of the Supernatural to Fawcett, who originally had no plans to publish horror comics. They bought the idea from Moldoff, and had a successful run with their horror comics.

I believe Moldoff was embittered by his dealings with Bill Gaines because he probably felt cheated. Moldoff, after all, had worked with Gaines' dad and then was excluded from Bill Gaines' plans after his father died.

As I also understand it, Moldoff had trouble with the other Shelly, Sheldon Mayer, when he was Max Gaines' editor on the titles Gaines provided for National (DC) Comics. I'm not sure what the trouble was, but as much as I like Sheldon Mayer's art and creativity I understand he was a terror as an editor.