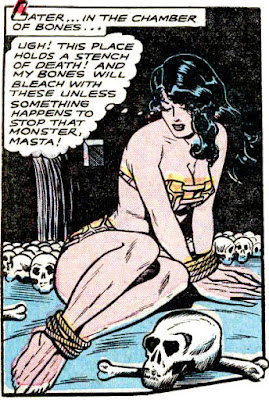 Our third and last entry for our theme week, comic book women of the forties. Today we have Rulah, Goddess of the Jungle

I have written of my belief that comics with sexy women like Rulah, Sheena, and all the other revealing-costumed tree-swingers were designed to sell comics to young guys, especially servicemen. But comics were sold to anyone, so even the very young got a peek at those glamorous queens, princesses, and goddesses of the jungle. I recently found a copy of Cruisin’ With the Hound, a compilation of autobiographical comic strips by the late Spain Rodriquez, famous underground cartoonist. This panel struck me: 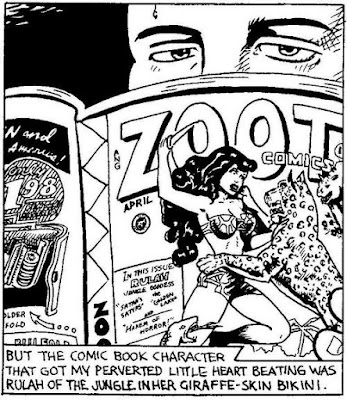 Rodriguez, born in 1940, was about 8 or 9 when Rulah was being published. Because they featured hot chicks, Zoot Comics and Rulah probably had a longer life than most comic books, passed around and treasured by young guys like Spain. We have further proof: the fact we are ogling Rulah seven decades after the comics were published shows Rulah may have worn a brief costume, but she had a long lifespan. 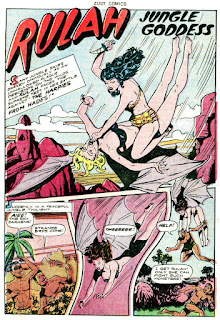 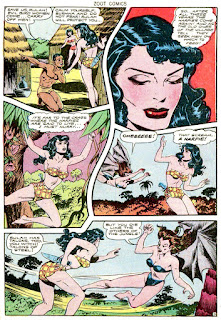 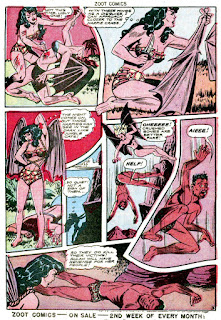 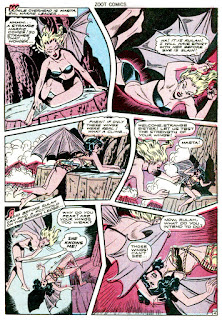 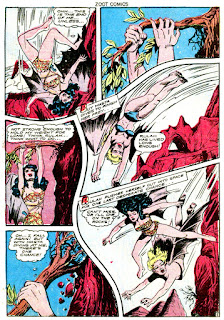 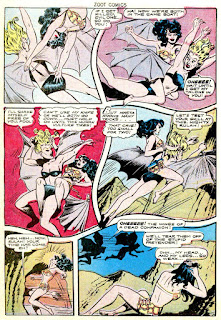 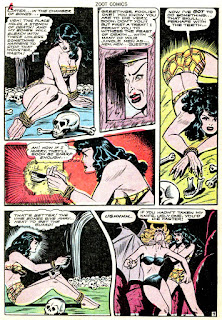 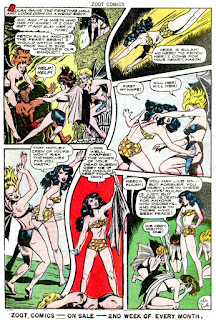 Were the jungle girls created because these Tarzan-type stories were popular with kids or because they allowed publishers to get away with showing a great amount of female skin? Either way, Rulah (is that just an accented version of "ruler"?) has been called "the most titillating jungle strip of its day" and the character was Sheena's chief competitor, "if only for the excess violence and minimal leopard [sic] skin" in her stories. Indeed, Rulah was #29 on Comics Buyer's Guide's 2011 list of the "100 Sexiest Women in Comics" right after Lois Lane, and someone online called her first story--which featured her crash-landing into a giraffe and making a bikini of its skin while nude--"the single greatest superhero origin of all time." It's really no wonder Rulah was referenced four times in Seduction of the Innocent.

But there are some positives to this dirty girl. A French-language online entry that I had translated into imperfect English (Rulah is called "a sculptural brown pilot") points out that, despite the repeat of the "white savior" narrative in these strips, whites and blacks lived together in harmony at the same time that segregation was still in full force in America.

Although this shapely safari siren was phased out by '49, she didn't totally disappear. Ajax-Farrell reprinted Rulah stories, calling the character Kolah, and Eerie Publications renamed her Pulah and reprinted the same story twice. Her stories have been republished any number of times over the decades and, even today, there's quite a bit of original Rulah fan art online. Not only that, but she starred in a downloadable role-playing game released in 2015. The most prominent creation of artist Matt Baker, who died tragically young, yet survives. He would likely be gratified that his 500-plus pages of Rulah art is still appreciated.

While the costume of our jungle stars is often smallish, it fits with our notion of what one would wear in the jungle. I mean we're all familiar with National Geographic. In this context my wife and daughter and me have not found the jungle art to be necessarily Man oriented; it's plausible. A long way of saying we found the comic art quite good for comics of the 40s. Now if Sheena was dressed like that in New York City...

Anyone ever notice that there are no African women in Rulah's jungle? African men, yes, but only white women. What's up with that?

cartoonjoe, I raised the issue of the weird racialism a bit more than a year ago, had raised it earlier elsewhere, and am sure that I were not the first to do so.