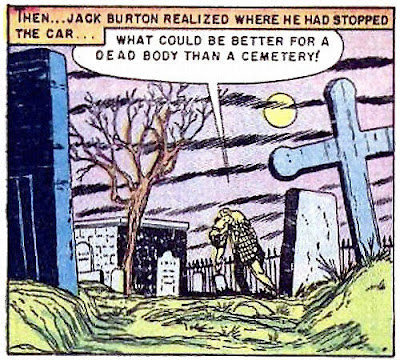 I like these two pre-Code horror stories for various reasons. The first, “Was He Dead?” from Avon’s Eerie #3 (1951), is a murdered-spouse-returns-from-the-dead story. In a few days I will show a Graham Ingels story where I will expound further on this theme, but for now suffice it to say this is a not-untypical example of that type of horror comic story, with nice yet derivative art by Moe Marcus and Rocke Mastroserio. It’s derivative in that some panels are borrowed from the style of Johnny Craig and Craig’s dripping sweat, as well as some inking inspired by Wallace Wood. A big plus is it’s got a bikini-clad babe!

“The Walking Dead” appeared in Web of Evil #12 (1954), and the artist is unidentified. You’ll recognize immediately that it is a zombie story with a borrowed twist: the zombie is a giant because the story is inspired by King Kong. That classic movie was re-released to theaters in 1952 and was a big box office success all over again, so it was aped (ho-ho) by several comic book scripters. (See the link below today’s two stories.) 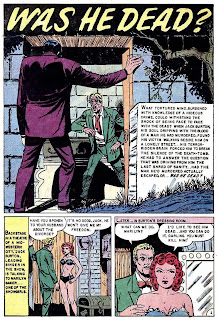 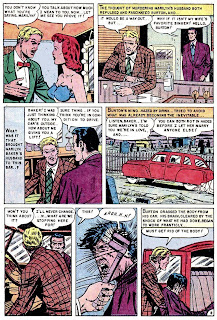 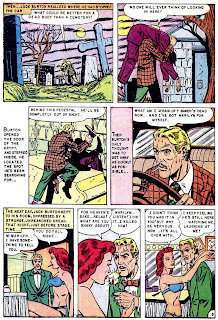 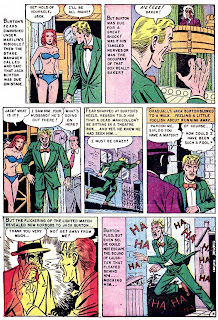 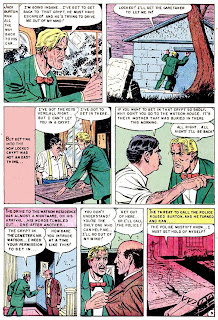 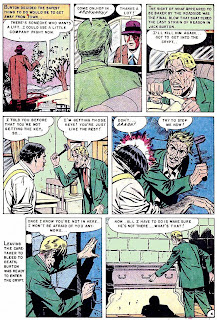 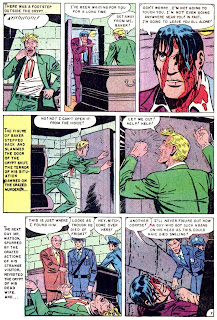 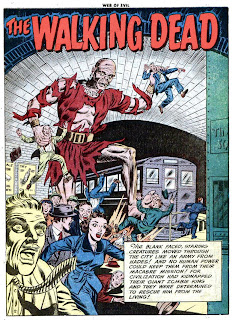 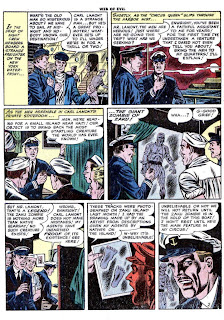 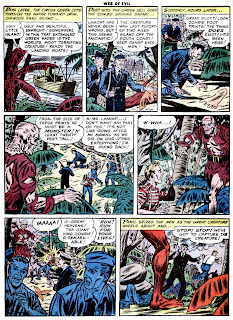 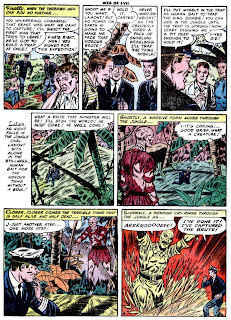 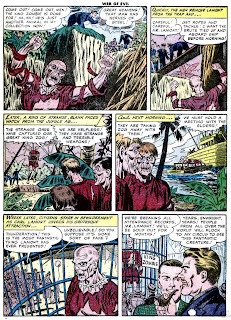 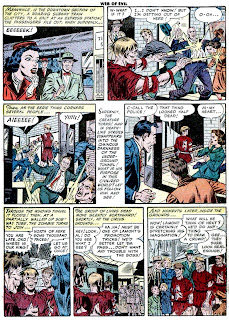 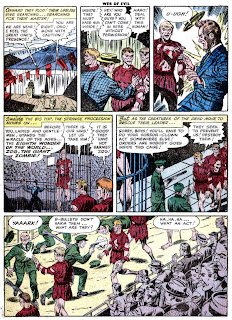 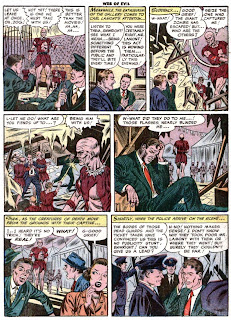 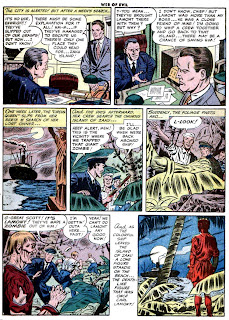 More on the 1952 King Kong re-release in this posting from nearly two years ago: 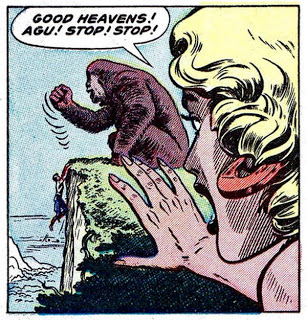 I thought someone had said that the particular unidentified artist/s on the Web of Evil stuff was either Charles Cuidera or Charles Nicolas... I'm not sure, have to scour through my archives.

I'm going to focus on the bikini -- for artistic reasons!

I don't think I've seen something that risque in a 50s horror comics. Lots of tight fitting gowns and night gowns, but never an actual bikini. I could be mistaken, but that one seemed pretty glaring.

Note that the first story teaches us the same lesson everybody should learn before murdering somebody -- if you see them everywhere you go -- and nobody else can -- IGNORE THEM. Don't go mad. Don't confess your crime. At first, it'll be terrible, but eventually you'll get used to them.

I guess that Baker either never knew of his wife's instigation of the murder, or decided to give her a pass on it.

Meanwhile, it seems as if, when writers wrote precode zombie stories, they just threw an awful lot to the wind. There's no explanation as to how a giant zombie came into being, no explanation as to how an autonomous zombie civilization came into being, no explanation of the strange zapping power of the zombies. The zombies fear the “strange and terrible weapons” of the expedition, but have no fear of such when they arrive at the circus. Political authorities seem rather disinterested, instead of pursuing the zombies as invaders or as potential taxpayers.

Thanks, Karswell. If you find it let us know. I thought I searched your archives and didn't find this story. Have you shown it before?

Brian, it is interesting in these days of raw sex and nudity in movies, internet and even on television that something like a bikini can still catch our attention. I had the same response as you.

Also, hallucinations can be our friends, especially if you're alone all day like me. I don't have any visits from any apparitions but if I did I'm sure I could have an interesting conversation.

Daniel, you know that no horror story (especially of the comics variety) could stand the application of any kind of logic. We just accept it. The giant zombies are there on the island, they is what they is!

Well, there are some people who say that without irony or hyperbolic intent.

But horror tales as such need to be horrifying. The reaction needs to be “Oh my G_d!” rather than “What the f_ck?” And that entails breaking few-if-any laws of reason or breaking them in sneaky ways; and, when breaking such rules, breaking those that the audience never completely trusted in the first place. And it means being frugal about pulling rabbits from hats.

A lot of goofball stuff appeared in the precode “horror” comics; so much so that it's tempting to claim that “precode horror” is a name, not a description. But there were some genuinely horrifying tales.

And some of those genuinely horrifying tales were zombie stories. However, it seems to me that, typically, there was even more “WTF?!?” in these zombie stories than in other sorts of precode horror tales.

Well, it's technically not a bikini since she's not by a pool or on a beach. So, as she's a "showgirl", the outfit she wears on stage? But would a showgirl who wasn't in burlesque wear such an outfit in 1951? Of course, the story doesn't say what kind of "theater", so it could very well be burlesque, and, pre-code or not, the writer's not allowed to say (sorry for all the quotations marks, but sometimes ambiguity reguires.) But did they have males singers in burlesque? Finally, it could be PART of a costume, quasi-underwear so to speak. Actually, I'm so caught up trying figure all this out, I can't remember what the story's about.

Oh, and it takes place in a midwestern town. Chicago, I imagine.

Kirk, maybe the description of the showgirl in the script said, "wears sexy outfit," and that was what was sexy to artist Moe Marcus.

Daniel, I'm not sure what's horrible anymore. We have been saturated with gory images of death for several years now in comics, games, television and movies, and maybe the idea of horror has shifted from those things which so scandalized the anti-comics groups of the early '50s. I find it more frightening to think of sadists or guys like Jeffrey Dahmer or Ted Bundy than any zombie, werewolf or vampire. (Those serial murderers did show up in pre-Code horror comics, only they were usually referred to as maniacs. They looked the part, unlike the guy next door looks of Bundy, for instance.)

Of all of the supernatural monsters, should any of them actually exist, for me the least dangerous would be a zombie. They're dead! They are walking around, but they are just meat. If I fantasize myself into a storyline like The Walking Dead on television, all I'd do is hunker down, figuring that sooner or later they would decompose to the point they'd be no threat except to my sense of smell. I mean, all those rotting corpses...peeeeee yew!