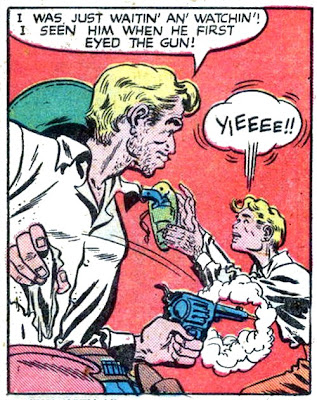 Joe (also called Jack) Slade has either a bad reputation as a Western outlaw, or he wasn’t that bad, depending on who you listen to or what you read. If you google the name you get a couple of versions of the life and career of Slade. The story about Slade I’m showing today is strictly in the bad man camp. But that isn’t the reason I’m showing this story from Desperado #1 (1948). It has to do with the declaration by publisher Lev Gleason, shown here, as to an internal self-censorship code for their line of comic books. 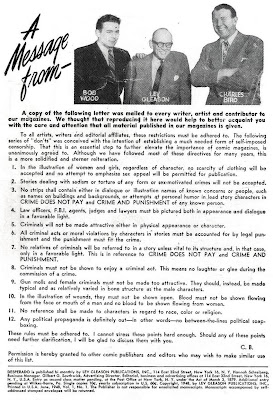 As you can see, there are specific instructions to follow, like number 10, “blood must not be seen flowing from the face or mouth. . .” Then you turn to page 3 of the story and what do you see? Blood flowing from a face. The story is excessively violent; killings pile up, and despite instruction number 2, “sadism or torture . . . will not be accepted,” on the final page a panel shows a half-nude man tied to a tree in a snowstorm, kept alive “in the freezing air” while pleading for death. In the history of comic books and the late forties-early fifties response to calls for censorship or outright banning of crime comics altogether this response from a publisher, with its “much needed form of self-imposed censorship,” may be the most extreme fubar in evidence. Had Dr. Wertham seen this story and the attendant message he may have devoted a chapter of Seduction of the Innocent to the hypocrisy.

Oh yeah...one more thing as long as I’m complaining. I hate the gimmick of the gun telling the story. Anthropomorphizing an inanimate object — another outrage! 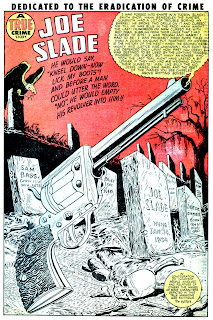 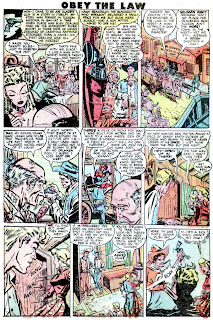 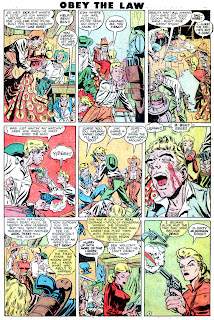 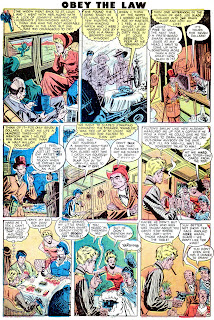 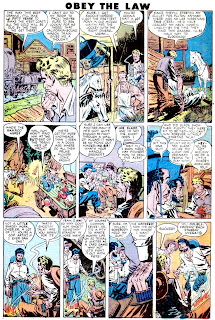 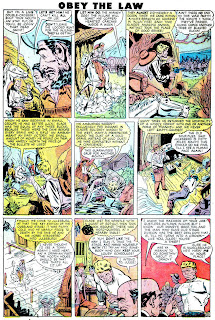 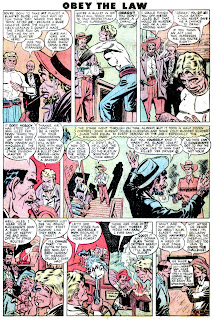 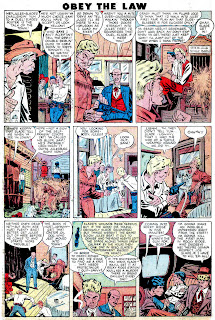 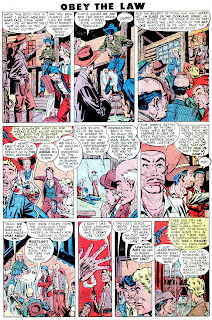 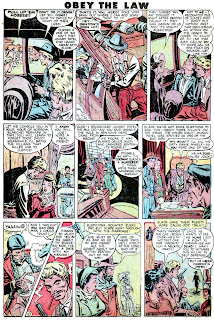 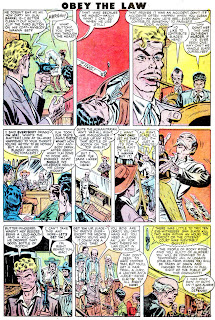 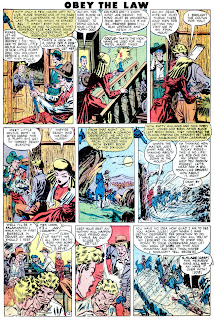 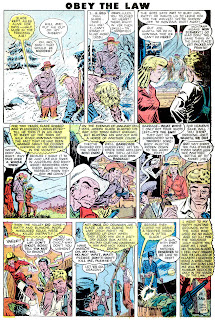 I'm less inclined to see Biro and Gleason as hypocrites than as involuntary outsiders — misfits — doing a pitiful job of faking social adjustment, and forming a pathology cluster, in which each was enabled to believe that there was nothing wrong with him by the other.

I'm not sure how Bob Wood fits in there, but his presence wouldn't have improved their mental health nor his own.

I think that, at times, they tried — really tried! — for wholesomeness. But they just didn't have it in them. They couldn't even quite tell what it looked like.

Who drew this? I see a lot of Joe Kubert touches...

Ger, the Grand Comics Database tentatively identifies Mike Roy ? and John Belfi ? with qualifications. Äs you can see by the indexer notes they are unsure: "Very uncertain art credits here, as some of the tall, longnecked figures with hats on the back of their head looks like George Tuska. Belfi, with his marked press in trouser legs, is credited on ink in Desperado by Jerry Bails' Who's Who. Mike Roy, credited on pencils in Desperado, is another possible on pencils, as many of the faces have some similarities with his signed work in Adventures into darkness #14, but he has shorter figures. He is credited on pencils in Desperado by Jerry Bails' Who's Who."

Daniel, Charles Biro made his early reputation with violence and blood. Check out the cover of Air Fighters Comics #2 someday for the type of stuff he was known for. I don't think it was any surprise he was editing stuff that was getting the wrong kind of attention. He got sales, and I think that's what they concentrated on until the outcry was too great. If distributors won't send it out, or if they do and retailers won't put it out for sale then the focus has to change. I agree with you that they didn't have it in them for wholesomeness...or at least wholesomeness that translated into sales.

An anecdote I read about Bob Wood from an artist who knew both Biro and Wood during World War II (neither served in the military, as I recall) is that he saw Wood get out of a taxi with his girlfriend, and then beat her in public. Nice chap!