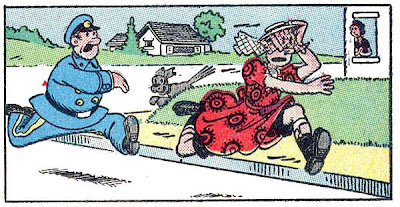 Blondie, the long-running comic strip, here seen in a dozen examples of Sunday pages from 1940, was a paper sitcom. Well-meaning but slightly dopey husband Dagwood played comedic foil for spouse, Blondie, who was much smarter than him. The gags came fast in this well-drawn and funny comic strip.

I scanned these from the reprints in Feature Book #29, a comic published by David McKay Co. in 1941. There are 64 Sunday paqes from 1939 and 1940, which works out to 16 months of Sundays. And all for 10¢! As a housewife keeping track of a household budget even Blondie would think that was a bargain. 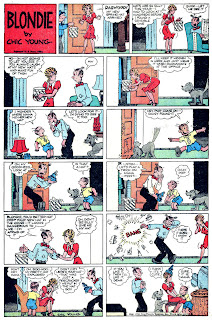 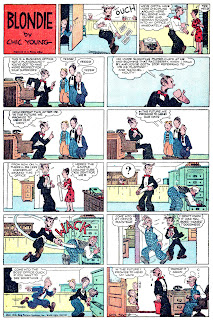 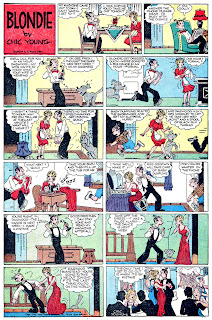 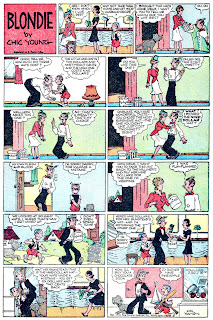 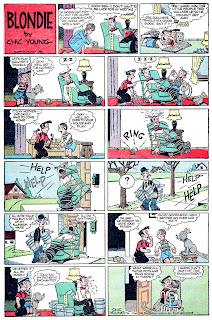 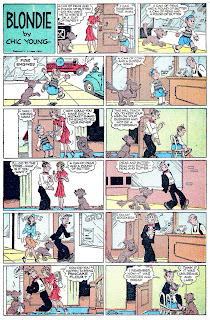 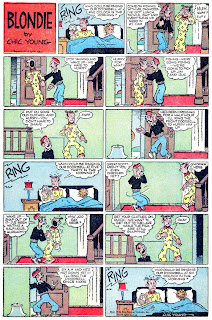 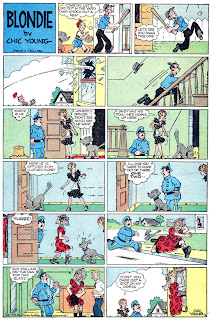 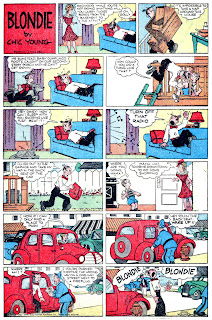 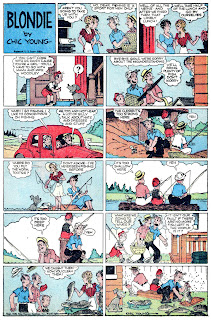 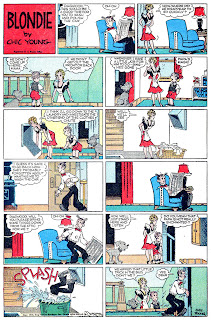 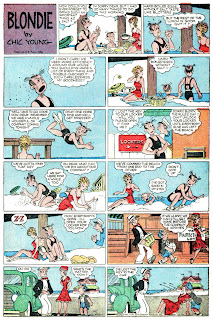 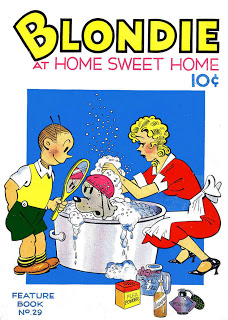 I received an unexpected Christmas card from the Bumsteads one year. I prize it.

Blondie has its charm even without a consideration if the subtext and so forth, but I appreciated more after my attention was drawn to things such as the undercurrents of panic that inform some of its characters.

I think the "undercurrents of panic" you mention, Daniel, is what drew me to the strip in the fifties and early sixties. I thought Dagwood was funny, running late, racing out the door and colliding with the mailman, or fighting with door-to-door salesmen. In contrast Blondie was calm and anchored the strip. Pretty but actually sort of boring, she provided a good counterpoint to Dagwood.

The vast majority of people fail to recognize what you note about Blondie herself. But, without that anchor, one would have to expect these characters ultimately to go mad.

Another thing to consider about her is how different from most comic-strip housewives she is about power over her husband. Blondie and Dagwood struggle over short-term issues, but Blondie's exercise of power is to help Dagwood realize his own long-term goals. She isn't trying to make him be something that he doesn't want to be, nor thwarting him for the sake of thwarting him.

And Dagwood is plainly no Andy Capp.

In fact, the attitude towards power is different between parent and child as well. In FB29-17,jpg, when Dagwood sees that he has scolded his son in error, Dagwood tries to make things right. In FB29-19.jpg, when Dagwood fails in much the same manner as had his son, Dagwood accepts the same punishment as he imposed upon his son.

(Of course, what makes that second episode funny is the notion of males continuing to be distracted by bright, shiny objects through-out their lives.)

Is Dagwood still being published today? The strips at best give me a smile but aren't as funny as they used to be. It's still good to know that this strip will be around. I don't see

In my newspaper the strip would be so shrunk down in size you could barely read the comic. That's what happens especially with the Sunday comics. The newspapers don't have any respect for the art form any more.

I think the Blondie Sundays were a lot funnier when they had an average of 12 panels per strip. You could tell a funny little story that way. Actually, that was probably true with a lot Sunday comics in the 1930s and '40s.

Blondie was still 12 Sunday panels when I was growing up in the 1970s. The only remaining strip to have so many panels, I believe. Today, it's down to about 6, and, in my arrogant opinion, not nearly as funny.

Of course, that Chic Young is no longer around might have something to do with it, too.