Number 1493: Spirit of the haunted house 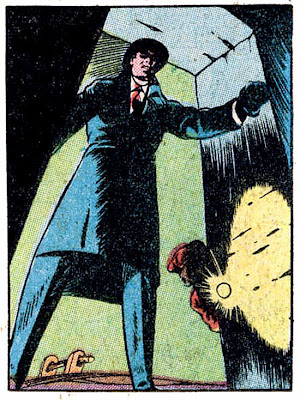 This Spirit episode was originally published in its newspaper Comic Book Section on December 12, 1940. It was reprinted in Police Comics #19 in 1943, which is the source of my scans. An interesting sidelight to this moody and effective story of an old dark house on a bleak and rainy night, is that the Grand Comics Database credits Joe Kubert with the coloring. Yes, that Joe Kubert. The GCD doesn't distinguish between the original and the reprint when reporting Kubert as colorist, but I’ll assume they mean the reprint. Joe was 16-years-old at the time.

Another item of interest for you Marvel Comics fans: Sam Rosen, a familiar name from countless comics of the 1960s, is credited with the lettering. 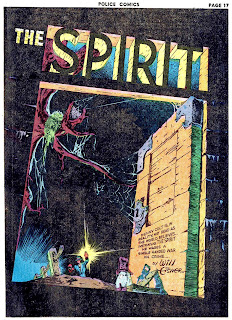 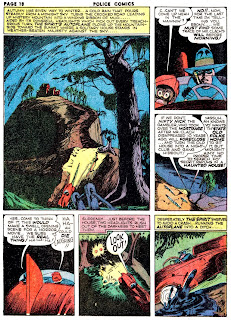 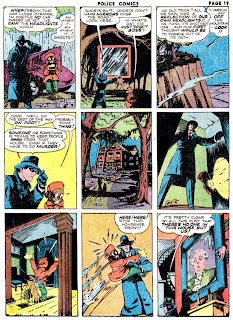 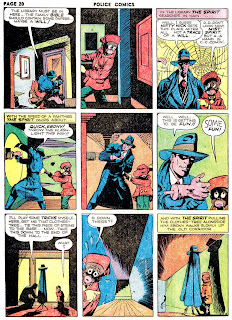 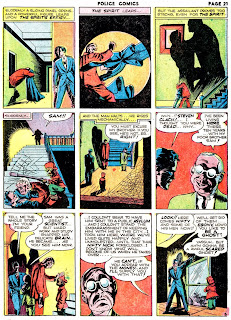 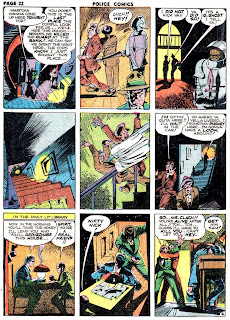 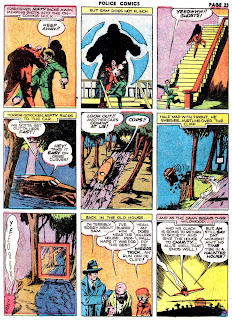 Much as I love the Spirit, it's sometimes hard to get past Eisner's racist caricature.

I've seen the opening splash page before, but never the story that went along with it. Could this be the first of the strips in which the name The Spirit is embedded in the picture itself rather than as a seperate logo?

I know Ebony does improve somewhat as the years go by, losing the dialect (via charm school) and becoming a much bolder, more recourseful sidekick, though he remains kind of goofy-looking.

Most or all of us would concur with jeirich.

Setting aside my reaction to the gross ethnic caricature (as we so often must), I love the primitive look of this story. The layout of each page is based on a 3×3 grid, and deviations are strictly by the fusion of two or more cells in such a grid. Narrative panes have a white border separating them from the illustrations. There is a relative absence of furniture and wall decorations in rooms. The house has a long, unbroken corridor. And the colors are inconsistent, unrealistic, … and visually appealing. (I'd like to know whether Kubert sought to reproduce the coloring of 1940, or had assimilated the principles of composition of the early work.)

Daniel, Jeirich, you both make excellent comments about the stereotyping of Ebony. I try to be racially sensitive and least warn people that the stereotypes are coming, but for some reason I have given Eisner a pass. I thought about why and it's as simple as familiarity. I have looked at his work for so long that I don't think anymore about Ebony and how he must affect people, especially people of color.

So, belatedly, I apologize if this grotesque 70-year-old caricature offends anyone. If I show Spirit stories in the future (which is likely) and the story features Ebony I'll make it clearer about my feelings on the subject.

I can't unmake the fact that characters like Ebony exist in old comics, but I can make sure that I always warn people they are about to see some ugly and racist caricatures.