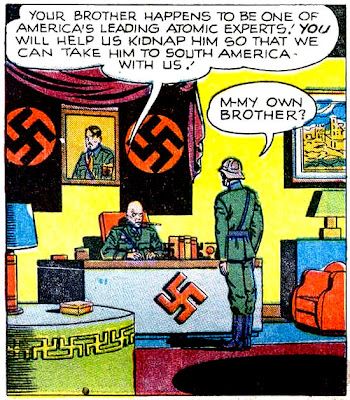 The Boy Commandos spent the World War II years kicking Axis butt, and in the postwar era they spent at least part of their time kicking surviving Nazi butt. Nazis were a great subject for comics — and fiction in general — in those years directly after the war. In real life many top Nazis had escaped justice after the Allied victory, and there were always those persistent rumors that Hitler was still alive. 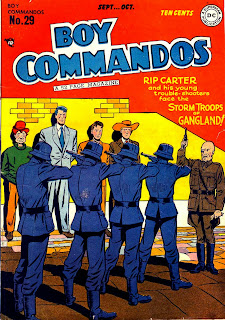 “Swastika Over New York” is from Boy Commandos #29 (1948). Art is by Curt Swan and Steve Brodie, according to the Grand Comics Database...which also makes a guess the story is by France Herron. 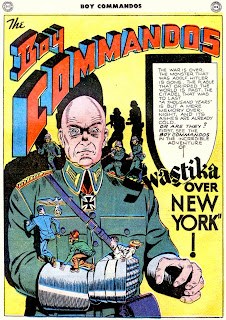 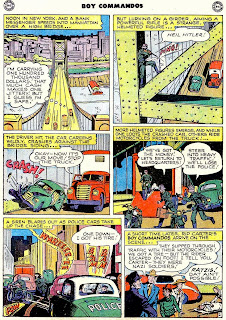 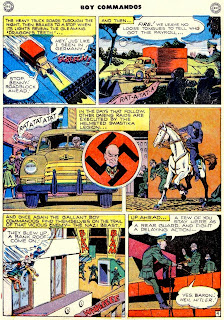 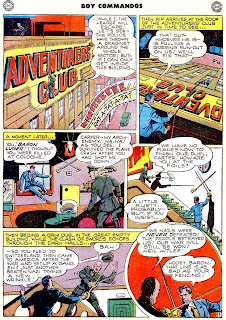 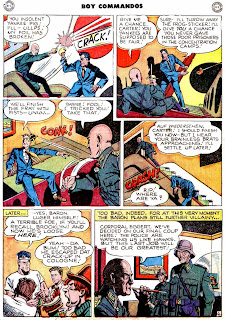 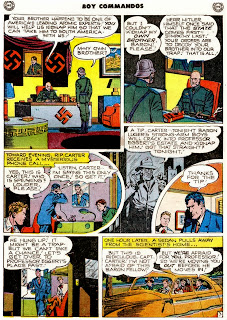 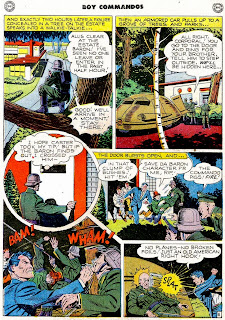 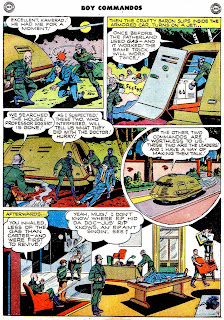 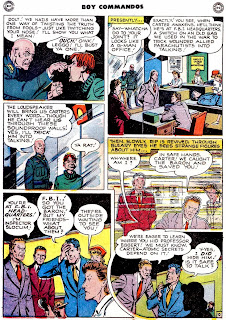 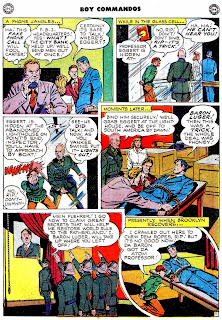 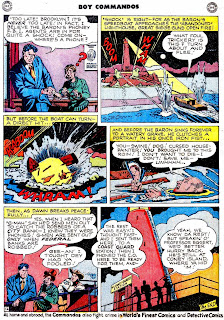 **********
Here is another postwar Boy Commando story, this time about Hitler. Click on the thumbnail. 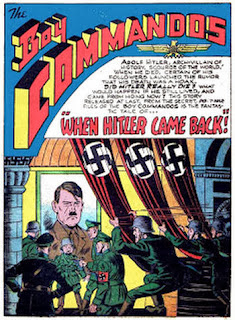 Many things drove the theory, which remained fairly popular into my early adulthood, that Hitler were still alive. I think that the most interesting motivation was hope that he might then be apprehended and brought to justice. His suicide not only denied others of the opportunity to kill him, but suggested that he wouldn't have felt all that bad about dying. And what else would have been done with the guy, if not to kill him?

There are still hold-outs for the idea that Hitler escaped alive. But we're coming-up on the 125th anniversary of his birth, and he wasn't in great health in the '40s; so, unless one adds an element of secret, advanced science to the theory, he's dead now. (There are no well-documented cases of people living to 123 years old.) Such theories would seem to have little abiding “real-world” significance.

Daniel, because Hitler's body was taken by the Russians and not shown to the rest of the world it created conspiracy theories about him being alive and secretly rebuilding power. The situation was perfect for fantasists in a Sunday supplement, spy story or science fiction kind of way. As for still being alive at 123, the folks who believe German scientists invented flying saucers and time travel wouldn't have any problem at all with Hitler still being alive, or having his living head preserved a la Futurama.

In the '70s Ira Levin's popular novel (and later movie), The Boys From Brazil, used the missing Nazi Dr. Josef Mengele as a contemporary villain, still working on his sinister medical experiments. According to the best information available, the real Mengele died in 1979 and was buried in Brazil I believe that may have kept hope alive with speculation that even at that late date Hitler just might be still hidden and alive.

I love the scene in BOYS FROM BRAZIL where Mengele excitedly tells the Hitler clone (a 14-year old American boy)about how he can rise again to greatness and be the glory of the world or something like that. The clone simply just looks at him and says "You're weird".