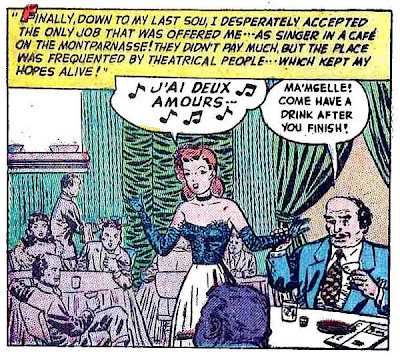 In my next lifetime make me a Frenchman, so I may be “born to love.” As Andre LeBlanc says on the cover of ACG’s Lovelorn #2 (1949), “It’s in our hearts — in our blood — part of our life!” Andre is being dramatic; love is not under patent by the French. (Love aside, the other reason I could be a Frenchman is I own a beret.) 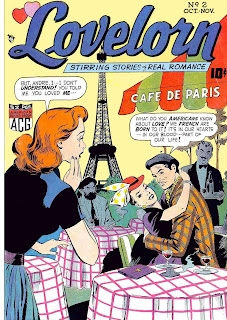 Laura Matthews, an acting student on scholarship to the Sorbonne in Paris, meets Andre after he insults her while she is singing in a café. He says she has a “stupid American crow’s voice.”  This is a love comic, so besides the stereotypes, complications abound, including Laura’s hometown boyfriend showing up unexpectedly after Laura becomes engaged to amorous Andre.

Sharp-eyed comics fans will notice Andre LeBlanc, the mustached cad of “Lure of Latin Love,” is also the name of a longtime comic artist. LeBlanc was a journeyman in the American comic book industry for many years, working with Eisner, Dan Barry, among others, and even working solo on projects like The Picture Bible. Could using his name be some sort of inside joke on the part of the writer? Our story is signed by artist John Belfi. 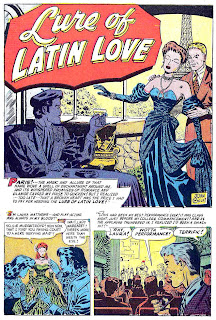 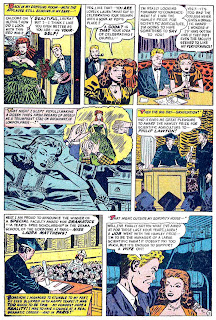 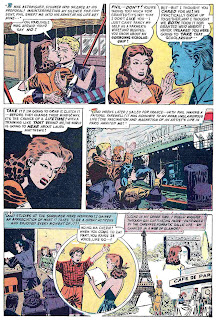 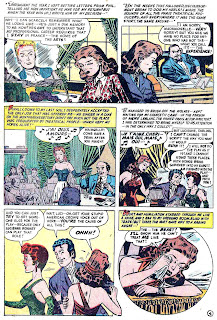 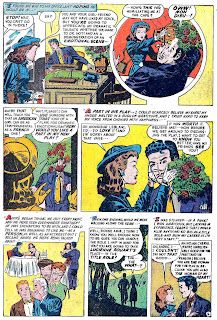 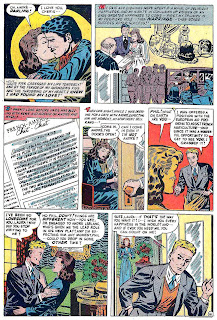 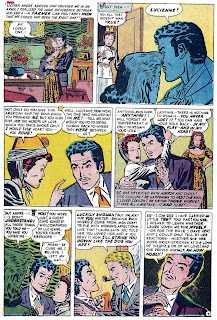 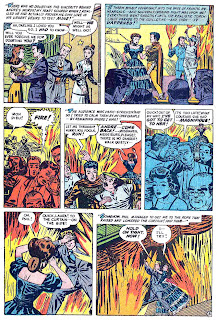 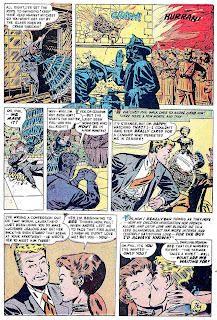 I continue to wonder what share of the readers were guys hoping to win (or win back) a gal who was with another guy, and what share were women fantasizing about getting to reclaim a good guy after a fling. (I had an ex-girlfriend who tried that….)

Should I ask, Daniel? Were you the "good guy" your ex-girlfriend tried to win back?

You don't have to answer if you don't want to.

I think it's human nature to want to get somebody back, especially if you consider that relationship unfinished business (I believe I read that in Ann Landers or Dear Abby many years ago). Personally, when a relationship is over, it's probably best to let it go and move on.

I have had that unfinished business feeling before, but now I'm going on 45 years married, so those types of memories are getting dimmer with each wedding anniversary.

Yeah, the desires for closure and for reconciliation can get tangled and confused, and sometimes one just has to accept that each may be unattainable or come at too high a cost.

I'm not sure whom the writer hates more, uppity women who dare choose a career over marriage or the french!