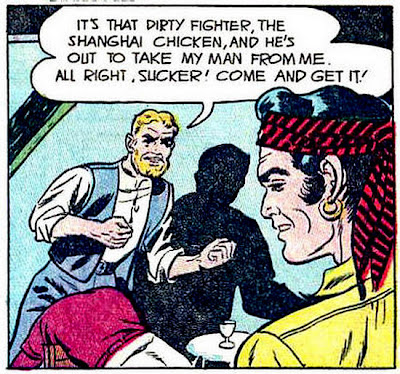 The Grand Comics Database credits Wallace Wood with penciling and inking the lead story from Fox’s Inside Crime #3 (1950). Even before I read the story I saw that Wood had done the splash page, the inside front cover, pencils, inks and lettering, but his familiar style only pops up occasionally in the nine pages to follow. Fox was notorious for either slow or non-payment, and my guess is it was a story done quickly, probably by at least one other artist than Wood, and maybe even more. Wood worked with several other artists during his career. At one time his main collaborator was Harry Harrison, although I’d have to depend on someone else to tell me if Harrison worked on this story.

Johnny Devine, the “Shanghai Chicken” was a real person, an Irish immigrant who became a crimper, a man who provided men for ships’ crews by the practice of shanghaiing (kidnap). The story, set in the 1860s, has anachronisms, and very little or no research was done for the drawings. So far I haven’t been able to track down the origin of a nickname like “Chicken”, which in context of the times doesn’t mean a coward as it does today. When I googled “Shanghai Chicken” I came up with some tasty recipes for a Chinese dish. 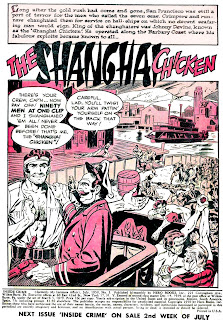 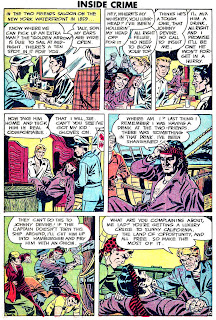 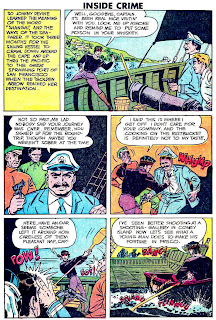 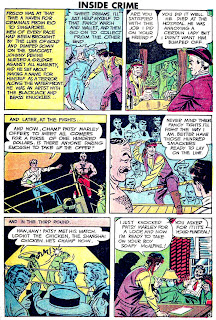 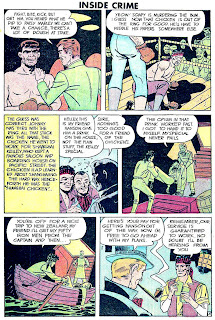 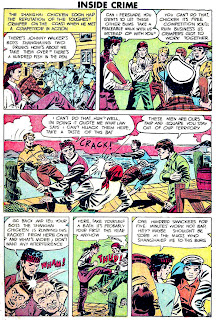 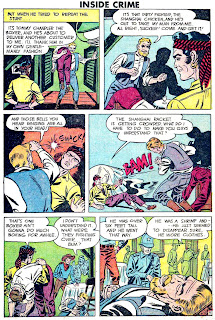 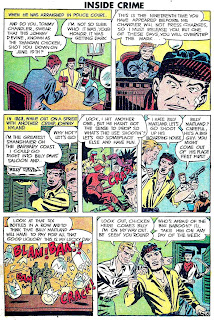 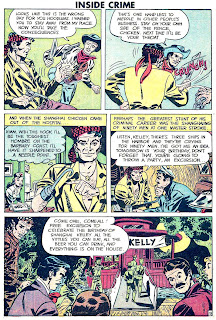 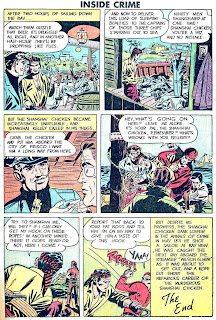 I've seen Devine discussed in a few books, but they've not explained the “Chicken” in his nickname. Other people have been nicknamed “Chicken” for a wide variety of reasons; I suspect that the datum in this case is lost.

Daniel, since word meanings in the English language are constantly changing it isn't so easy to understand the context, especially when calling a kidnapper a chicken.

I was thinking about such things this morning when my daily newspaper described people who go to Comicons as part of "geek culture." I don't like the word geek. In my mind a geek is a guy who bites the heads off live chickens as part of a carnival act. But it has become sort of chic to be thought a geek in the modern sense, much to my amazement.

The first use of “geek” that I encountered was in reference to Joe Simon's Brother Power. Later I learned the earlier meaning.

The terms “nerd” and “geek” became chic by way of information technology. When I was a teenager and young man, those who were adept with such technology were given those labels derogatorily. But as the presence of that technology came to be ever more felt in ordinary lives, the social standing of people with those abilities improved greatly. Somewhere in the course of this, those people and others in mathematical sciences began to adopt the labels “nerd” and “geek” semi-ironically.

Other people wanted to be like them, and if they couldn't demonstrate the same skills, they could still have the same diversions — and claim that they too were thus “geeks”.

From there, in the minds of these wannabees, an interest in any sort of fantasy (including alleged science fiction) became some sort of badge of “geek” honor — notwithstanding that few computer programmers would have much tolerance for, say, the Twilight series.

I still wince at the memory of encountering a line of people waiting for a midnight release of a Harry Potter book, and who self-identified as “intellectuals” by virtue of their interest in that childrens' series. And San Diego's Comic Con is just … ruined, beyond repair.

Daniel, a generation earlier the hippies identified themselves as freaks, which I still think of in its original meaning, but which hippies wore as a badge of honor. I've heard the opinion expressed that if you call yourself the word(s) that others use against you, it jerks the rug out from beneath the name-callers.

I understand words being misused and that original meanings change over time; it's an inevitable part of the evolution of language. It's my blessing (or curse) as a reader that I have encountered words in their original form, and still think of them that way. I mentally translate them when I hear them in their modern usage.

As for science fiction geeks or comic book geeks, I would never use the word to describe fans, but the media loves to do just that.

I agree with you about the SD Comicon. I admire its success, but it lost me as a visitor.

"Chicken" may be a boxing thing. I met a guy once, about 30 yrs. ago, who claimed to have boxed as "The Panama Chicken." I don't know if that's true, but he did have the words "Panama Chicken" tattooed on his chest in inch & a half letters.

No one noticed that the hook moved to the left hand from the right in the last two panels?

M. Bouffant, I believe you may have hit on the origin of the "Chicken"... I'm thinking of fighting cocks or roosters...which might sound a bit silly: "Shanghai Cock"? "Shanghai Rooster"?

When I googled “Shanghai Cock” I came up with some frightening recip— okay, not really.

I think this is definitely Harrison and Wood, with Wood doing the splash page solo.